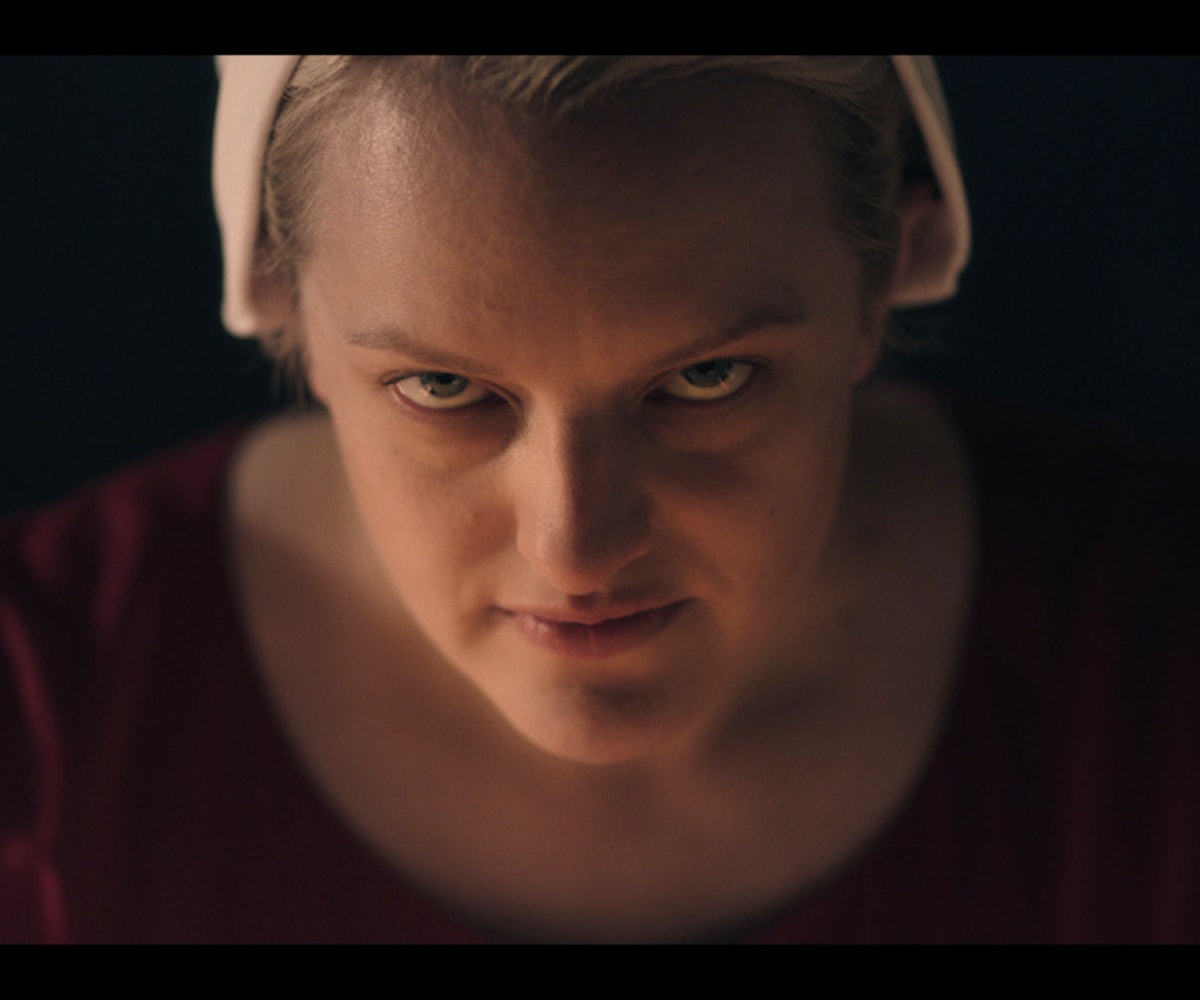 Very light spoilers for the first several episodes of Season 3 of Hulu's The Handmaid's Tale, ahead. Also, a big spoiler for the end of Season 2, but that came out a year ago, so no apologies!

When we last saw Elisabeth Moss' character June in the Season 2 finale of Hulu's The Handmaid's Tale, she had just rejected the opportunity to escape to Canada with her infant daughter, and instead decided to stay within the confines of the ultra-religious, oppressive regime, Gilead, wherein she is subjected to sexual slavery and, like, other really bad things. It is really understandable that lots of people who watched screamed at their TVs, "What the fuck are you doing, June?!?"

But, in the year that's followed that season finale, there's been time to reflect on June's choice to remain in Gilead and work to free her other daughter, Hannah, and it is possible to say that this wasn't just the right choice for June, but it was, in fact, the only choice for June. As The Handmaid's Tale, which started off as a relatively faithful adaptation of Margaret Atwood's seminal dystopian novel, has expanded its universe from its intimate origins inside the Waterford household, it's become clear that this tale isn't just about minor rebellions, but is rather about revolution. And so it makes sense that June would stay in Gilead—she wants to fight, and she knows she can only dismantle this regime from inside.

June, then, has a big fight ahead of her, one that Moss is excited to take on. When I spoke with her recently, she was leaning forward with eagerness and enthusiasm as she spoke about June's development in the third season, telling me all the ways in which the character has transformed from her necessarily quiet origins. Below, see what Moss has to say about June's choice to stay in Gilead, why June is going to "end up breaking bad," and what the most fun part of playing this complex character is.

The second season ended on a moment that felt almost anticlimactic: June had the opportunity to escape Gilead with her child, but instead she gave baby Nichole to Emily to take to Canada. What did you think of that choice for June?

I think, storytelling-wise, we had to do that. It was so much more interesting. It was so much more of a challenge for the character that she stays [in Gilead]. For me, I had no hesitation with it because, one, she has to stay for Hannah; and two, the reason why she stays in that moment is because she sees Commander Lawrence and realizes that there's a commander who's helping get people out, and helping get handmaids and babies out. There's a commander who's possibly on her side. If she leaves, she's never going to be able to come back to that commander. She's never going to be able to talk to him again. How is she going to be able to use him? To me, it was the only thing that she could do.

Over the course of the first two seasons, June asserts her power in ways small and large—but mostly small, because of the constraints on her. This season sees a new kind of liberation and energy, a renewed sense that change is possible. How did making that shift feel?

I think there's a complexity to June in this season that's very different. It almost makes the previous seasons seem like her fight was simpler before. Things are getting more complicated now. So much of the season is about the person she has to become in order to do what she has to do. It's not going to be pretty. There's a real interesting divide between the first and second half of the season. The first six episodes are like one set; and then from seven to 13, it is another set. That's because of the turn and the trajectory that [June] starts to take in [episode] seven. I think it's going to be really surprising to people. I think it's going to challenge people's ideas of who June is and what she can do. But I think it's also interesting and important. The show is so funny because I could almost talk about the first six episodes as a completely different season and the last seven episodes as a completely different season. So much changes for her, and she really has to end up breaking bad and becoming a person that is making decisions that are perhaps morally questionable. But, she has to in order to do what she has to do.

Any hero's arc is dependent on their environment, and when that's toxic and oppressive, there's almost no way to actually make a change without navigating and participating in that system. So while June was once automatically seen as "good," she also had very few opportunities to really act. But, as we all know, there is no pure revolution. Is compromising on morality in order to effect change something that's coming up a lot?

It calls into question this whole idea too, that when you're operating within a corrupt system, the only way to dismantle it is to be stronger, be smarter, but also be more potentially cruel and duplicitous. Which is a tall order because there are a lot of cruel and duplicitous people in Gilead.

June will always sort of fall on the right side of the law because her objective is so inarguably good. In a way, those first six episodes kind of set her up to start that journey. Part of it is realizing that this world could be a lot worse. If you thought Gilead couldn't be worse, it actually can, which June realizes once she goes to D.C. Also, [she realizes] that she's running out of time. She actually doesn't have all the time in the world to get this done. There's an urgency there that's added. I think that's really important.

That kind of urgency and that realization that everything is actually on a schedule is sometimes the only thing that will make people act. I feel like we see that today, as people are starting to understand more and more that climate change is real or see the way that abortion bans are going in to effect state by state. When there isn't that real incentive, people do have a hard time breaking out of their inertia. Is that why June's objective changes from the beginning of Season 3?

At the beginning of the season, it's to get Hannah and to get out. I think it changes and it becomes much bigger than that. Without spoiling anything, she realizes that she really needs to hit Gilead where it hurts.

As dark as all this is, what are the most fun aspects of playing June?

For me, this season it was subverting even my old expectations of the heroine that we had. Taking her to even darker places, really taking her to the brink of insanity. Pushing her so far that's she's either going to be Janine—she could lose her mind—or she's going to have to end it for herself. Pushing her so, so far and that actually being where she needs to be in order to become the person that she needs to become. So that for me was really fun, pushing the character to places that were pretty extreme.

In the first season, there was so much of me being not able to show how I felt, me not being able to say how I felt. What's getting really fun about the show, what's getting fun about Season 3, was getting to be able to say how I felt, getting to be outspoken. There used to be the outer June that she would display as Offred to Gilead, and then there was this inner June that existed. Seeing both of those people disappear, and that kind of new June forming, a June that didn't walk into Gilead and that's not the same person... that was really fun.

The Handmaid's Tale is streaming now on Hulu.