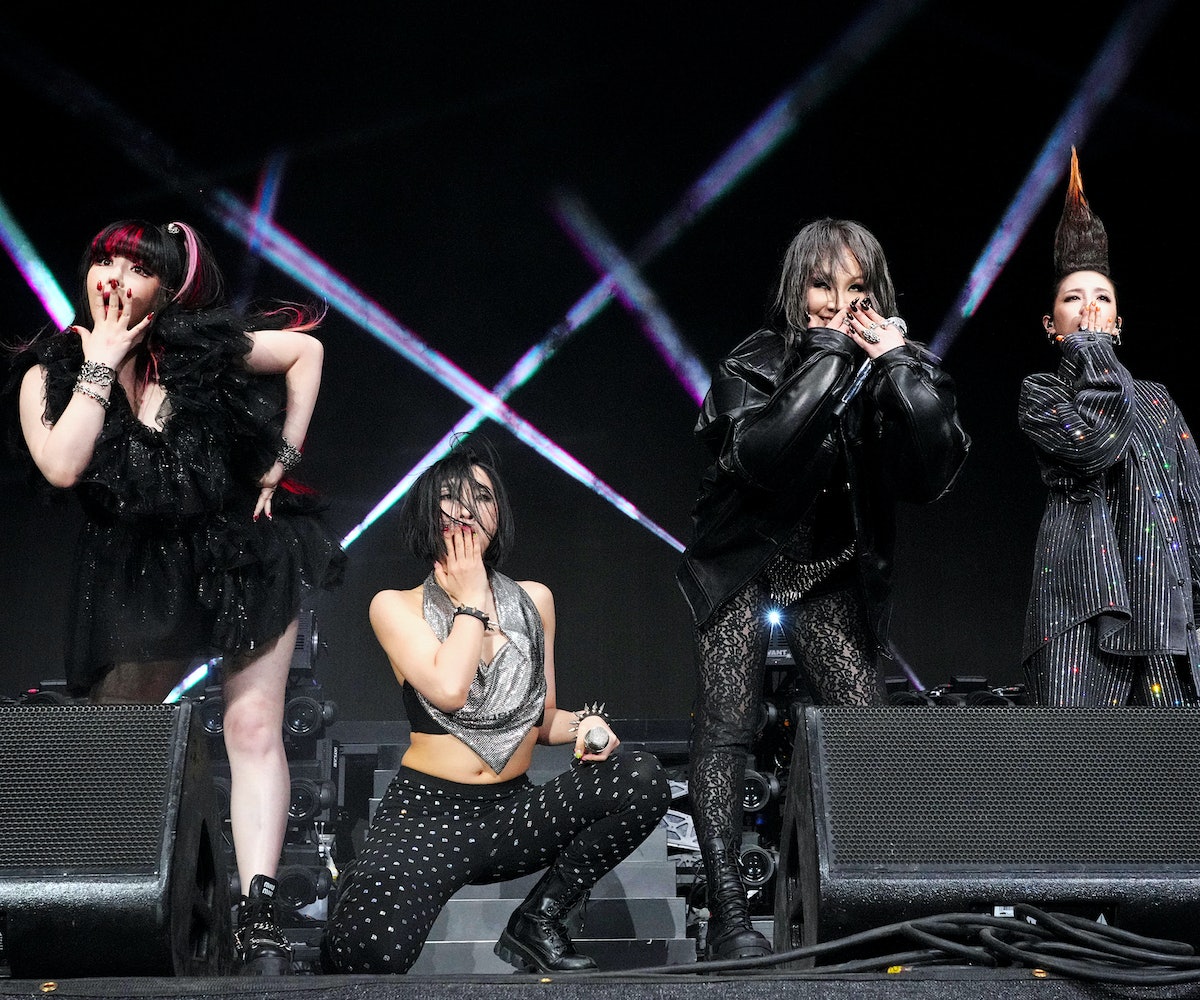 Six years after their last performance together, 2NE1 rose from the grave. Perhaps no one in the world was ready when the legendary girl group — arguably the girl group of girl groups — appeared for an unexpected reunion Saturday night at Coachella. Emerging through fog and smoke at what was thought to be the end of CL’s set at 88rising’s Head In The Clouds Forever stage — four familiar silhouettes were lit up by the spotlights as the beginning bars of their classic anthem “I AM THE BEST” blasted through the speakers. Could it be? Was it them? The lights went on, and the crowd went ballistic.

Though 2NE1 officially disbanded in 2015, the girls — CL, Minzy, Dara, and Park Bom — looked like no time had passed at all, slipping into their comfortable group dynamic and emitting a powerful stage presence that proved after all these years they are still, indeed, the best. The performance’s overwhelming familiarity was also in large part due to their styling and beauty, leaning punk-rock this time, encapsulating 2NE1’s essence to the core, from the return of Dara’s playful flame hair to the carefully curated rebellious aura of the whole tableau.

The man behind some of the magic was Los Angeles-based makeup artist Sang Jeon, who helmed the beauty looks for Minzy and CL. Jeon, who began his career in Seoul and has since amassed a set of elite clientele in L.A., is a close collaborator of CL and she tapped him once more for their historic Coachella looks: signature chunky eyeliner for her, and a sleek graphic eye for Minzy. “Because [CL had] wet hair and a crazy outfit… we went for a light ‘70s punk-rock [look], not extra, extra vibes,” Jeon says.

A few days after their performance, NYLON caught up with Jeon to get all the details behind the group’s Coachella looks, the products he used, and what it was like backstage before their history-making performance.

When did you find out that this reunion was happening, and how did you get involved?

When did I know about this? Actually, even CL and her team were really secretive to even me, and hair, and the stylist, I guess. Maybe like a month ago from this weekend, [CL’s] team — they didn’t tell me anyone’s name — but they were saying that, “Oh, there’s going to be three different girls.” I was like, “Oh, it’s going to be 2NE1.” So when I met CL, I just asked her if the secret three special guests are the 2NE1 members. And she said, “Oh yeah, but it’s hella hella secret.” I mean, this is very confidential, so obviously we just all kept the secret.

Oh my god, hell yeah. When they debuted as 2NE1, I was gagging.

How did you conceptualize what direction you wanted to go for their beauty, for the performance? Did CL tell you what she wanted?

She actually directed everything for this Coachella performance: outfit, makeup, hair, stage, everything. So she showed me the sketch of their outfit — Alexander Wang customized their outfit and I heard that he actually flew down to L.A. from New York to do their outfit.

When she showed me the sketches and the moodboards, and the stage vibes and stuff, I was just thinking, I mean, I love the outfits, especially CL’s outfit, the lace bodysuit with the spiky bikini top, and the leather bomber jacket. I was like, “Oh, it’s pretty rock and punk vibes.” So I was just thinking, “Maybe I should do some ‘70s punk-rock vibes.” And then, we actually did try some looks before the real Coachella day, because, obviously, they were having rehearsal for, I think, for like a week.

For the real Coachella day, when CL decided that she was going to do wet hair, I was like, maybe the makeup has to be a little not too loud. Because wet hair, crazy makeup, and a crazy outfit — I thought that’s too much. So we went for a light, ‘70s punk-rock vibes [look], not extra, extra vibes.

I love Minzy’s look. Is it called a cut crease with her eyeliner?

I did the graphic eyeliner look on Minzy, yeah.

Can you break down every individual member, what you did, and the products that you used?

I didn’t do Park Bom’s and Dara’s makeup. For Minzy, she actually wanted to do a really natural makeup look. But when she did rehearsals, her team and I thought maybe makeup can go off [more]. On the real Coachella day, she told me, “Why don’t we just do a little graphic eyeliner moment?” But I wanted to do a little bit more extra, so I did a little bit of chunky glitter at her eye corner. It’s a Korean makeup brand called Dear Dahlia, I used their brand’s glitter. [Minzy’s] actually got the perfect brow shape so I just wanted to make sure that her brows looked flattering, so I used [Major Brow Lamination Gel] from Patrick Ta.

Before doing makeup, I used the new Dior eye patch. For skincare for CL, I did Huda Beauty’s Wishful skincare line. They [have] the chin lifting [sheet mask]. You can tuck it under your ears, kind of like a mask situation, but for your double chin. I used that pack only for CL. And then, for makeup, honestly, Minzy’s skin and eye makeup was not that special, but for eyeliner I used Inglot gel eyeliner for her graphic eyeliner.

Park Bom and Dara, they had their own makeup artists?

Yeah, I think they brought their old makeup artists when they were 2NE1, they were working together, I guess.

Are you able to speak a little bit about their hair? Especially Dara’s hair, because it was so incredible.

Before Coachella, I just heard that they're going to have their 2NE1 iconic hairstyles. So I heard that Minzy actually cut her real hair before coming to L.A. Honestly, I don’t know about Park Bom, because she just barely talked. But Dara, I heard she’s going to have the tall fire hair. People were kind of worried about that hair, because, I guess, when they did the fire hair when they were 2NE1, Dara was having a really hard time. But when she did that hair on the real Coachella day, Dara actually really enjoyed it.

I mean, it was their first time performing live together in six years. What was it like backstage? Were they nervous or excited?

They were really hidden when we entered Coachella. We even rode cars separately. They were really strict. Even when CL performed, they were still hidden from somewhere, and then they somehow popped up from the stage.

Before we got to their stage, at the trailer, they couldn’t even go out, because, obviously, it was secret. So there was only hair and makeup, stylists, and 2NE1 members in their trailer. Before the stage, they were [rehearsing], especially CL, she was really rehearsing in the trailer. Basically, CL led the vibe. She was like, “Guys, this is a pretty big project for us, for our fans, so let’s just please kill it.” I think some of the members were kind of nervous, but obviously, not too nervous.

How did it feel for you to be involved in such a historic moment?

Honestly, I still can’t believe I was part of this f*cking history moment. I was like legit, the biggest Blackjack when I was living in Korea. I still remember, when I was in high school, I drew the four members, and then I was asking my gay friends, “Hey, is it too much if I want to send this, my painting, to YG?” But now, I actually legit painted on their face. I’m like, “Oh my God, this is too much.” I usually get nervous if the client is huge, or the project is huge, but I’ve already worked with CL a lot of times. And I mean, even though it was my first time working with Minzy, she was so nice, she’s so sweet. So I actually was really not that nervous.