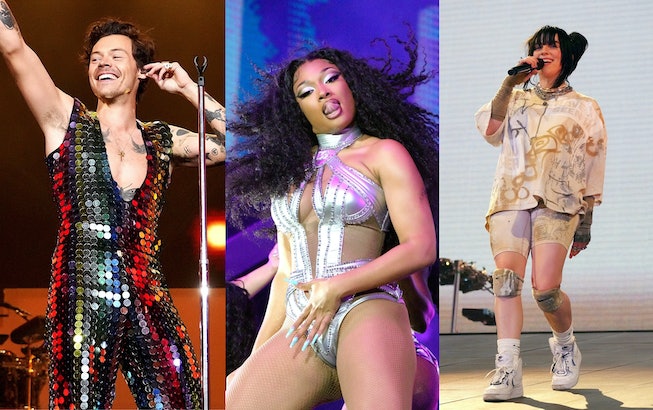 Coachella is officially back. After two years of cancelled festivals, Coachella made its powerful return to Indio, California this past weekend with a range of jaw-dropping moments, from Megan The Stallion’s previewing an empowering unreleased song, to Shania Twain making a surprise appearance during Harry Styles headlining set. K-pop legends 2NE1 reunited on stage and even Justin Bieber got in the mix with a surprise performance of “Peaches.”

While we wait for another round of live music, take a look at all the highlights from the first weekend of Coachella 2022.

Hot Girl Meg stunned the crowd at her debut Coachella performance. During her set, she performed an unreleased track that samples Jodeci’s “Freak’n You Remix” and features rap legends Raekwon and Ghostface Killah from the Wu-Tang Clan. A no-frills rap track that seemed to reclaim and reassert her position at the top of the totem pole, it was a stunning return-to-form for the rapper and a signal of a brand new era.

Country music star Shania Twain, surprised Harry Styles fans when she appeared on stage with the “As It Was” singer during his Friday night headlining set. The unexpected duo, glittering in matching sequined getups, sang Twain’s “Man I Feel Like a Woman” and “You’re Still the One.”

Billie Eilish is no stranger to Coachella performances, but she still has some tricks up her sleeve. During her set, she surprised fans with special guest Damon Albarn from The Blur and Gorillaz, and rapper Pos from the group De La Soul. Albarn first joined Eilish on stage to sing the wistful Happier Than Ever track, “Getting Older.” Then, Pos joined them for a rendition of the Gorillaz hit, “Feel Good Inc.”

Justin Bieber made a surprise appearance

Justin Bieber didn’t have his own set at Coachella this year but the star still made an appearance — and while shirtless, nonetheless. Bieber joined R&B singer Daniel Caeser on stage, and together, they performed a stripped-down rendition of their hit song “Peaches.”

The “Call Me Maybe” singer is entering her next pop era. During her Coachella set, she sang her new single “Western Wind.”

Anitta — the Brazillian popstar and NYLON’s latest cover star — brought a taste of South America to Coachella this year. The singer performed a mix of her hit songs, and, of course, showed off her twerking skills that inspired a viral TikTok trend.

Brockhampton, the Texas-born hip hop group, said their 2022 Coachella set would be one of their last performances, but that doesn’t mean they’re done working together yet. Towards the end of their set on Saturday, they displayed a quick behind-the-scenes video of Kevin Abstract showing his band members new music ideas. Then, the screen flipped to a sign that read, “THE FINAL ALBUM 2022.”

2NE1 reunited during 88rising’s “Head In The Clouds Forever” Set

Record label 88rising used their set to celebrate the best Asia has to offer. During their show — which also included debut performances for Chinese artist Jackson Wang and Indonesian singer Warren Hue — the infamous K-pop girl group 2NE1 performed together for the first time since they disbanded in 2016. For their short, but epic, reunion they sang their hit song “I Am The Best.”

Hikaru Utada made her Coachella debut

88rising’s Head In The Clouds Forever set also brought out the legendary Japanese singer-songwriter Hikaru Utada for their debut Coachella appearance. Utada performed their infamous ballad “Simple And Clean,” from the Kingdom Hearts soundtrack, for the adoring audience.

NEXT UP
Entertainment
19 Niche Music Festivals For Every Type Of Person
Entertainment
Meet Amy Allen, The Grammy-Nominated Songwriter Behind Pop's Most Honest Hits
Entertainment
FLO Is Headlining Their First US Tour This Spring
Entertainment
Beyoncé Announces 41-Date 'Renaissance' Tour
Style + Culture, delivered straight to your inbox.