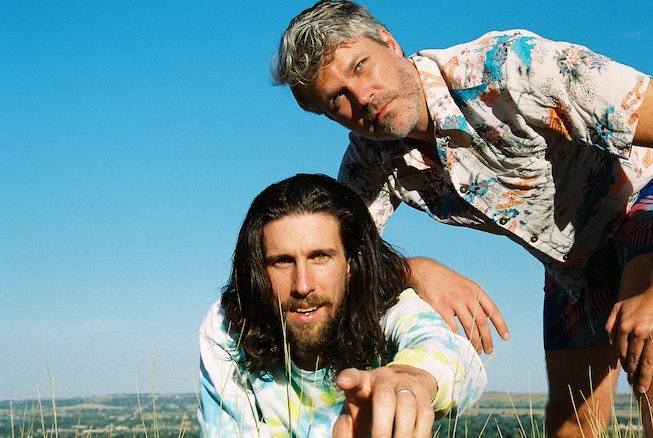 Warped Tour alums, 3OH!3 and Bert McCraken of The Used, have joined forces for a new single called “Vampire’s Diet,” officially being released on streaming platforms Friday, but premiering exclusively on NYLON early, below.

The dark and propulsive dance-rock track is off 3OH!3’s first album in five years, NEED, that’s expected to be released later this summer. Over a rave-ready beat, 3OH!3 vocalist Sean Foreman and McCraken expound on the ghoulish aspects of modern existence — livestreams of people dying, grieving on the internet, Morissey, online dating... “Are you still with me? Yeah I think that I’m still here/ But if I’m being honest there’s no body in this chair,” admits Foreman on his verse.

3OH!3 and The Used have both made major comebacks to music in the past year, coinciding with a powerful revival of ‘00s emo and pop-punk nostalgia. The Used released their eighth studio album Heartwork, in April 2020 after a three year break. Meanwhile 3OH!3 made their triumphant return at the end 2020 with the surprise single “LONELY MACHINES” featuring 100 gecs. The title of their upcoming album, NEED, is a play on the duo’s breakout 2008 record Want, which included the blockbuster singles “STARSTRUKK” and “Don’t Trust Me” that catapulted them to fame.

Hit play on “Vampire’s Diet,” and continue on to read 3OH!3 members Sean Foreman and Nat Motte and Bert McCraken reminisce about the first time they met, how “Vampire’s Diet” came together, and the important role a David Foster Wallace book played in the making of the track.

Sean Foreman: You know the type of song you hear and remember where and when you first heard it? I was in my mom's Plymouth Voyager (magnet flame decals on the sides) driving a van full of friends to a party in the mountains of Colorado when The Used's "Taste of Ink" came on. What a song! Now, every time I hear it, I am transported back to the glory days of my youth.

When we eventually met Bert from The Used on Warped Tour I was Starstrukk (see what I did there?). But seriously, there are few artists that embody the full spectrum of a performer and he was it. Offstage he came across as a curious, humble scholar, but as soon as he put on his fingerless gloves and grabbed the mic, he became larger than life.

Recently, Nat sent me the start of a song he was producing and mentioned that it reminded him of a guitar riff from our unheard-of college dance-rock band (called Weightroom; we played one show to one person). I loved the instrumental immediately, reminding me of bands like The Faint and Bloc Party, bands that inspired us. My pen hit the paper and the first line I wrote was "I can't stand Morrissey." Why? Hahaha I really don’t know, but it felt appropriate for the song. After that we spoke with Bert about collaboration and played him the start of the track, he was instantly inspired by a passage he read by David Foster Wallace and penned his verse. It fit perfectly on the song! From Australia, he sent his recordings and we all corresponded as one does in the new era of e-conferencing. And summoned from the coffin was "Vampires Diet"!

Nathaniel Motte: We met Bert on Warped Tour 2018, and really connected in the 100% humidity summer evening of a Nashville parking lot. It had been great to catch their shows on the tour. The energy of The Used set is all-encompassing and all-welcoming — something that we’ve always tried to do with our music and our live shows as 3OH!3.

When it became possible for us to collaborate with Bert on “Vampire’s Diet,” we were thrilled. We stayed in touch over text (us at home in Colorado and Bert at home in Australia) and Bert hit us with his David Foster Wallace-inspired verse. Big man recorded it on his own and sent us the parts to make it a true collaboration. We’re honored and so very stoked to have been able to work on the song with Bert!

Bert McCracken: I met 3OH!3 in a parking lot at a punk rock summer camp and became comrades instantly. I was excited to hear that they wanted to collaborate, and when I heard the track I was smacked in the face with joy and nostalgia!

At the time I had been rereading David Foster Wallace’s first novel, The Broom of the System, and felt the story being told in “Vampire’s Diet” had parallels and reflections in the character Patrice Lavache and her interviews from the sanitarium. To me the track felt like an exploration of our connection to humanity in the age of data and information technologies. I hope that you love it as much as I do.