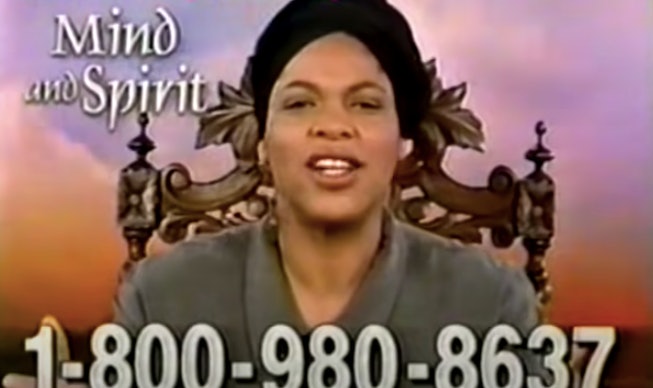 These days if we want to peek into the future, there’s a myriad of apps and astrological services at our fingertips. Resources like Costar and The Pattern provide a quick fix for anyone curious about what’s in store, but that sort of instant gratification is new.

Once upon a time, people had to call (from a landline, no less) mystics like famed ‘90s tarot reader Miss Cleo for a look into a metaphorical (or real) crystal ball. But after years of dominating the psychic scene, Miss Cleo got caught up in a fraud scandal. Now, her story is being turned into an investigative documentary for the next generation of future-seekers.

According to Deadline, XTR studios and Majority Productions are teaming up with critically-acclaimed director Senain Kheshgi to create the film. The project will center around Miss Cleo’s involvement in a billion-dollar fraud investigation. At the height of her career, Miss Cleo was the star of popular television ads that encouraged viewers to call in for a paid reading.

“Claiming to be a shaman from Jamaica, Miss Cleo’s charisma and famous imperatives enabled the Psychic Readers Network, a pay-per-call service, to charge callers seeking answers over $1 billion for advice,” XTR explained. “But in 2002 it all came crashing down when the Federal Trade Commission accused the network and its owners of deceptive advertising, billing, and collection practices, bringing Miss Cleo’s reign as queen of clairvoyance to a dramatic end.”

To the public's dismay, Miss Cleo turned out to be a normal woman (sans mystical powers) named Youree Dell Harris. Harris was born and raised in Los Angeles, and was working as an actress and playwright before she got the role of Miss Cleo.

According to Khesghi, Harris’s true involvement in the financial-scam is uncertain. “Youree Harris may have been an accomplice or perhaps a victim in the Psychic Reader Networks fraud,” she said. “But she also had talent and personality, which for women doesn’t always translate into access or wealth.”

Harris died from cancer in 2016, at 53 years old. Since her perspective can’t be included in the documentary, Khesgi plans to interview people from Harris' past instead. While investigating the infamous scandal, the documentary will also celebrate Harris’ life and legacy.

“Her story is an example of how brown and Black women have historically been marginalized and exotified in society and pop-culture,” Khesgi said. “The enduring image of the dark mystical woman still continues to perpetuate this stereotype,” she continued. “As a woman of color and a director who wants to explore stories from diverse perspectives, I am moved by how Youree found a way to navigate her life on her own terms.”

The untitled project is currently in production. A release date has not been determined.

NEXT UP
Culture
6 Shows To Binge Once You've Finished 'The White Lotus'
fashion
How ‘Spice World’'s Costume Designer Nailed The ‘Scooby-Doo on Acid’ Look
Culture
Loewe’s Howl's Moving Castle Collection Is An Anime Dream
Culture
The Madonna Biopic Is Being Scrapped
Style + Culture, delivered straight to your inbox.