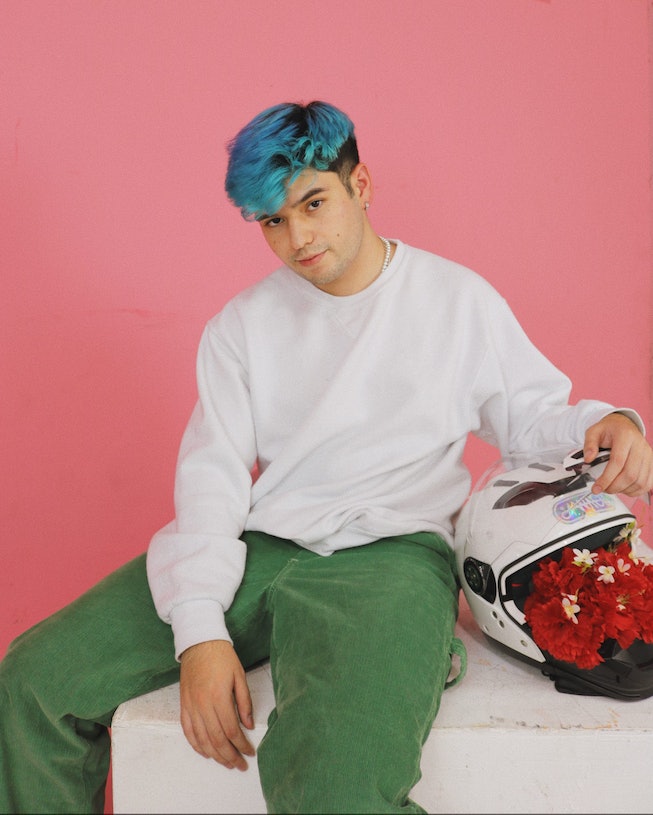 Aaron Paredes — the overnight music sensation known as A-Wall — did not intend to go viral. “It was just a bonus for me,” he says, timidly, in a recent zoom call. “I definitely didn't try to go viral or anything. I personally just make music that I want to hear myself. I’m always trying to better my own music, but the fact that one of my songs went viral is just, I’m just super thankful.”

If you have TikTok you’ve likely heard A-Wall’s hit single, “Loverboy.” The singer’s idyllic song became the soundtrack to a wholesome trend that asks, “Yo bro, who got you smiling like that?” According to the singer, “Loverboy” was slowly getting popular before TikTok found it, but the cheerful edit took the song to the next level.

“It slowly picked up more traction, and each day it would hit somebody new,” he recalls. “It would be like ‘Oh, bro, did you see Sylvester Stallone used your sound, or that the Jonas Brothers used your sound? I would just wake up to stuff like that. It didn’t feel real.”

Since its release in 2019, “Loverboy” has amassed over 60 million streams on Spotify, while accompanying over 100 thousand videos on TikTok. It’s an unlikely feat for any artist, but especially impressive for a self-trained, independent creator. The Arlington, Texas-born lyricist may be new to fame, but his talent is rooted in a deep-seeded love of music.

As a teenager the singer flipped old cars to support his passion. “I sold my 1958 Ford Thunderbird that my grandpa gave me in El Paso to set up my home studio,” he recalls. “I was paying $60 an hour at the recording studios. I was like, ‘This is not going to work, if I want my songs to sound how I want them to sound then I need to have my own studio.’”

Shortly after, Paredes created the persona A-Wall, a clever play on his last name which means “wall” in Spanish. With his own studio, he was able to fine-tune his sound, and has since produced three albums experimenting in indie-pop and R&B. His most recent record, Primavera — created with the alternative hip-hop group CHROMA — is a smooth combination of both.

This November, A-Wall is opening for the indie-pop group Boy Pablo, and plans to continue working on new music. Below he speaks with NYLON about the creation of “Loverboy,” being inspired by Tyler, the Creator, and why TikTok isn’t a fad.

When did you start making music?

I started making music in middle school because I wanted to be a DJ. Coming from El Paso, the EDM scene was huge out there. People would just throw raves in the desert. And that was where my first interest sparked. I went to my first ever concert and I saw the lights, the crowd, and how one person could just control a huge amount of people for an hour. So I knew I wanted to do some sort of entertainment.

It started with wanting to be a DJ. I remember one of the biggest songs (at the time) was Steve Aoki's “Pursuit of Happiness” remix with Kid Cudi, and that was my first introduction to hip hop. I became a Kid Cudi fan, which introduced me to Kanye, which led me to Tyler, the Creator. I became a Tyler stan after Flower Boy came out — and that's kind of where it all started, like me recording myself. I first recorded myself during senior year of high school. My friends kept pushing me to do it. They would hear me do talent shows and stuff in high school, so they would boost me, and then we went to our first recording session. I paid $60 for one hour to cram a whole song in, because I was broke.

“I feel like in today's day and age you definitely have to lean into [TikTok], and realize that's the generation of today's music.”

Did listening to Tyler’s music inspire you to become an artist?

For sure, their artistry is definitely a huge inspiration. I just really admired how they went about putting out music. Whenever they put out an album, it's a moment. You remember that. Their whole rollout is crazy. The merch is crazy. The live shows they throw are crazy, and I just really admired them for that. They always pushed the limits of music whenever they put out something.

How did your hit-song, “Loverboy” come together?

I started working on that song for a project that was coming out at the time, which was titled Helios. I remember I had this show coming up — because I didn't really do too many shows. I had to try to get myself into shows in Dallas — and I was like, “Let me try out this song that I've been working on.” And that was “Loverboy.” I remember performing it and by the second chorus, the crowd was just going crazy. So I was like, “Okay, yeah, this is the lead single.” And I put it out and, you know, it had a good run.

When it hit the top 10, I was like, “All right, this is enough. It ain't going further than this.” And I remember I was with my friends that day. I didn't even know, I didn't even check. It kept going down from eight, to seven, then to five, and then they said, “Yo, you know you're number one right now?” And I was like, “Stop lying.” Then they showed me, and I just went crazy. I remember we were at Whataburger, and I was just losing it. It was an insane feeling for sure.

Has going viral changed your view of the music industry?

I used to look at TikTok and be like “Ah, it's just a fad, it's going to go away because it's instant, people will get tired of it.” But through all this — and even looking at the Grammys, people are getting nominated for Grammys off of TikTok — I feel like in today's day and age you definitely have to lean into that, and realize that's the generation of today's music. You can win a Grammy from making a song on TikTok go viral. I'm definitely more on TikTok now. I think the artists that are blowing up on TikTok are really talented.