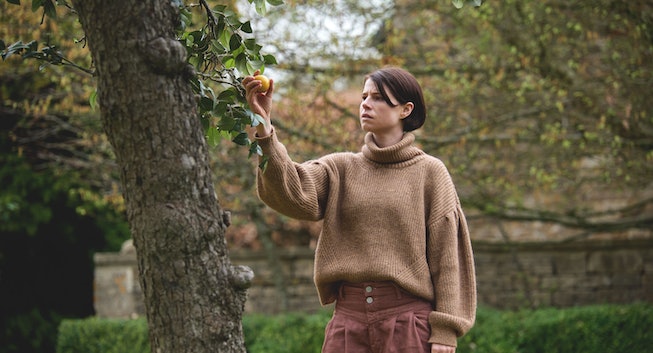 In A24’s newest psychological horror-thriller, Men, Harper (Jessie Buckley) goes on a countryside retreat alone to heal from a personal tragedy. What she finds instead is a village filled with same-faced men (all played by Rory Kinnear) who in turn stalk, harass, blame, terrify, and gaslight her.

Loosely, the gruesome nightmare that Harper walks through is director Alex Garland’s take on the patriarchy, its ancient origins, and its seemingly unstoppable drive to replicate itself in any situation. As the director of lauded films like Ex Machina and Annihilation, Garland certainly isn’t shy about a little gore, and Men is no exception — with a particularly brutal bloodbath taking place towards the end of the film. But it’s the looming sense of dread and unease that really makes the film so unnerving, as Harper deals with both the trauma of the relationship she is trying to heal from and the constant intrusions of the men populating what should be her safe reprieve.

Ahead of the film’s release (Men is out in theaters Friday, May 20th), NYLON caught up with Buckley to talk about working with Garland, the script’s heavy symbolism, and what she hopes (or doesn’t hope) audiences will take away from the film.

What did you think of the script when you first read it?

I loved it. I found it really compelling and wild and right up my kind of thought-provoking strata. Alex has made amazing films. I think I’d just finished filming Lost Daughter, and we just met for coffee. We were kind of immediately speaking the same language. I loved it. It was quite like a pure script. It was 90 pages. There wasn't much fat. It was very clear, but also abstract. I loved it.

I read an interview with Alex where he says that you, beyond just being the lead actor and carrying the film in that way, really contributed a lot to the film, whether it was your own dialogue or another character’s. Which parts of the film did you add the most to?

Oh, God. I don't know. I felt so creative in it. Alex really held a space for me to offer anything that would come up that morning, where I'd be like, "Oh, I've got an idea. What do you think about this?" I don't think there was any time where he said no. Things like the screaming in the bath, was kind of something I brought, and exiting the house. I had an idea that there would be different kind of states of leaving the house, like she was trying to get out of hell of some sort. That was something that we kind of did very quickly in 30 minutes, but it was kind of every day, tiny, little things.

I was fooling around on the piano one day in between takes and playing the one piano piece that I had learned when I was 17. Alex was like, "Oh, let's film that." It was quite a live set. Rory was the same. Rory is one of the funniest actors I've ever worked with, and also just such a brilliant arranger, especially when he was Geoffrey. He was just kind of free-styling improvisation all the time. It would become its own thing from that. It was really playful. We could kind of bring anything, and yet we definitely something that we were trying to shoot.

Rory was hysterical as Geoffrey.

Oh, loved Geoffrey. Whenever Geoffrey came to set, it was party town. I had to turn away from camera most times when he was there because I just found him hilarious, which was a very necessary, light relief.

There was so much symbolism throughout the film, from the forbidden fruit at the very beginning to the stone carvings throughout. What did you make of the symbolism and was there an overarching theme for you?

Oh, God. I can't remember. I always feel like when I get to this point, it's like three years ago when you've made this thing. I'm sure there was at the time, but, again, it was kind of a communal thing that we probably spoke about in the two weeks of rehearsals where we were talking about the whole world of the film, about the relation between men and women, about the relationships in the film, about relationships with nature, the kind of generational aspect of it all.

Alex had kind of put forward such strong symbols of paganism and the Green Man and what they meant throughout history. It was so rich. You could ping yourself off anything in lots of different takes and it have a different meaning to you, but there was never one singular thing. For me, there's not one singular meaning about this film. There never was. It was a constant question and something that was provoking me and Alex and equally, hopefully, an audience to have their own experience of what that was or what that might mean to them.

There’s been some response about a horror film about different aspects of maleness being directed by a man and what limitations that might have — as the leading woman of the film, what’s your take on that?

My take is I love men and I love women and I have, my take ... I don't know. I mean to each their own, man. Whatever people want to take away from this is theirs and I give it to them wholeheartedly. But why I felt kind of curious about this is that I am in relation to both men and women in my life. There are things that I don't know. There are things that feel fragile between us. There are things that I feel like have potential for me to understand more, but it was never a divisive thing for me. I don't think Harper experiences it as being divisive or separating herself from her emotional relationship with her husband or with men in general. I think she went to this place to face the truth and face the fear of what she had experienced and come to terms with it in some way. For me, personally, it wasn't divisive, but if it is for other people, then that's totally fine.

By the end, do you think Harper has faced what she came to face? I mean, do you think she walks away triumphant or where do you feel like she ends up?

I have no idea what happens to Harper after that moment. Life, I think. I think what I loved about Harper and what I felt from her when I was doing the film was that her agency came from her choosing life and her living out her fundamental right to choose her life. If that came with having to face the things which were repressing her or submitting her, then that's what she had to do. For me, that's where her strength came from was facing those fears. But, I don't know what happens to her. I think she would keep trying to live her life, like most of us.

I did want to ask about Harper's husband being the only Black character in the film, if there was meant to be anything deeper behind that or any symbolism behind that?

No, I think that was just the casting.

Lastly, what do you hope audiences take away from it, both men and women? And do you expect that the reactions will be different?

Yeah, I'm sure it'll have a lot of different reactions. I hope it does. I don't need it to be liked. It's quite a bold film. I'm sure it will provoke a lot of different reactions. That is kind of why I wanted to do it, is to provoke something, anything, because it provoked me. I think people can take away from it whatever they want to take away from it, but I guess what I took away from it, is that I am in relation to these things in my life and we all have been for decades, centuries. There's things that we need to unlearn and learn again so that we can move forward with each other, but everybody's got their own time with that.