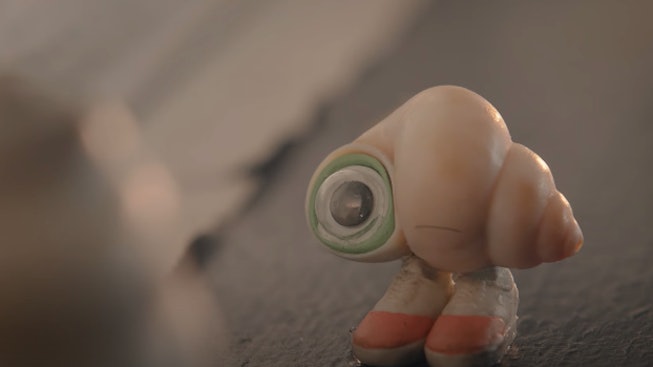 11 years ago, the world was introduced to Marcel The Shell — a tiny, one inch seashell with a pair of iconic shoes and “a lot of other great qualities.” The viral character was created by comedian Jenny Slate and award-winning filmmaker Dean Fleischer-Camp for the pair’s animated YouTube series, Marcel The Shell with Shoes On. Their stop-motion style videos became wildly popular in the mid-200s, notably for Slate's perfectly awkward delivery as Marcel.

Since releasing the first episode, which now has over 30 million views, Marcel’s adventures have been turned into two best-selling children's books. On or off screen his off-kilter legacy remains supreme, and now Marcel, and his pet lint, Alan, are getting the A24 treatment.

The indie-company recently obtained the rights to the film version of Marcel the Shell With Shoes On and are working on re-releasing it as one of their titles. The film, which was directed by Camp, debuted at the 2021 Telluride film Festival earlier this year. According to Variety, the 90-minute expansion of the series, “chronicles the journey of Marcel and Connie, who were once part of a sprawling community of shells, yet now live alone as the sole survivors of a mysterious tragedy.”

“[Creating Marcel is] like I'm putting a hand down into the richest, darkest part of my psyche and trying to pull out the thing that I really want people to see about me, and what I'm like, and how I think, and what I need, and it comes out this way,” Slate said in an interview with Marie Claire. “I really, really, really value it.”

The “hilarious and heartwarming story,” sees Marcel turn into an online sensation. According to the synopsis, a documentarian discovers he and Connie in his Airbnb and begins filming their interactions. “The short film he posts online brings Marcel millions of passionate fans, as well as unprecedented dangers and a new hope for finding his family,” the log-line reads.

Marcel The Shell With Shoes On hits theaters June 24, 2022. Watch the first trailer below: