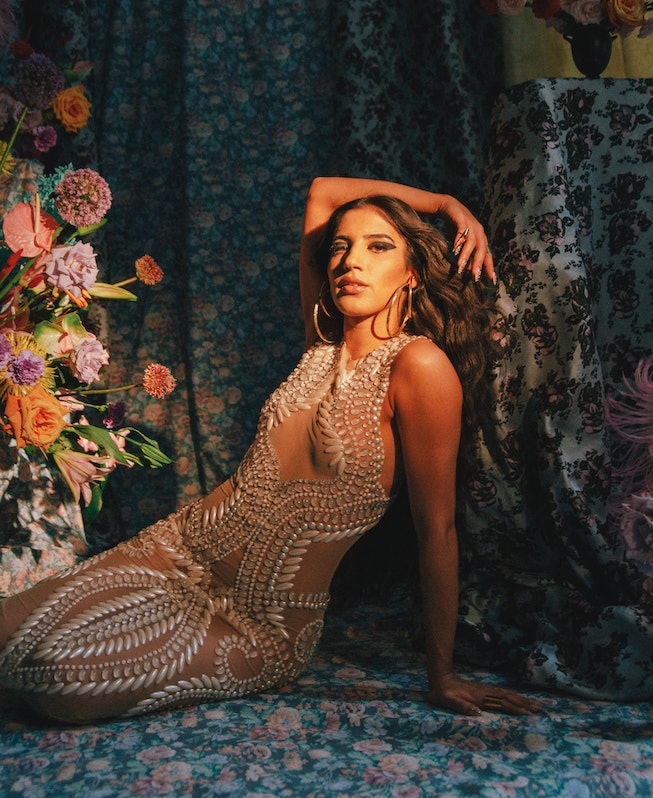 "When someone sees me, an Arab artist, [whether] they want to say it or not, there's this preconceived notion in their head about my upbringing," singer and songwriter Abir says in a phone call with NYLON. If the Moroccan-American artist's hit song “Finest Hour” with Cash Cash established her as a breakout talent to watch, then her unapologetic new project Heat shows that she also has something to say. And in Abir's words, she's not afraid to get loud. "I don't have time to think about what you think of me,” she asserts. “I only have time for me to tell you what an Arab woman in 2020 feels like."

So, how does that feel? In a teaser video, the New York-based songstress boldly declares: “I’m a lot of what a Muslim-Arab woman isn’t expected to be. What she looks like. What she does…The current narrative is uninformed. And honestly, it’s f*cking boring.” The mission to dismantle common misconceptions of women from her culture as oppressed or submissive came to the 26-year-old after months of soul-searching following her 2018 debut EP, Mint. During this transformative period, Abir says she began looking for a more purpose-driven message in her songs that connects the many layers of her identity. The tracks go through a lot more vulnerable topics — a contrast from the carefree summer anthems of Mint. “Inferno,” her new single, is her first attempt, and with it comes the new sound of Arab-Pop.

The song is the ideal backdrop for establishing a new genre that bridges the gap combining east and west flavors of catchy melodies which she refers to as “Arab-Pop.” To perfect the sound, Abir enlisted producer Mick Schultz, whose impressive resume includes multi-platinum hits like Jeremih’s “Birthday Sex," and collaborations with artists like Rihanna. “I went on so many blind dates with producers to fill this space of creating Arab-Pop, but Mick was the only one off the jump who was so devoted to learning about the different percussion and melodies to integrate into this new version of pop.” Schultz began researching ways to blend instruments commonly found in Arab music, like the "oud" to sound like a guitar, or incorporating the "tabla" to create a strong, rhythmic beat. The results culminated in their collaboration on Heat.

The accompanying video for “Inferno,” shot in Marrakesh pre-quarantine, contains all the textures of a still, hot desert paying homage to Abir’s Moroccan heritage. But the striking contrasts between the women, standing tall, some covered from head-to-toe (one even wearing a modern Nike hijab), while she and her girl-pack show extensions of her own western styles was something she says was very intentional. “When people see hijab in America and all over the world, they think these women are oppressed, but no, she’s very comfortable,” the singer explains. The men, on the other hand, are shown searching, observing. Present, but not dominating, crouched over or sitting, some passing out from the desert heat while the women exude the energy, the movements, the fire. An attempt, she says, to share her perspective on these complicated relationships.

“I wanted to showcase the beauty behind the disaster of the extreme scales of good and bad,” she says. “Heat versus cold, fire versus water, and the only thing that came to mind was this idea of combustion, or an inferno.” There’s a scene in the video where she’s standing in a body of water with fire igniting over it, reinterpreting the notion that you don’t have to be one or the other. Sometimes, you’re a fire and a water bender.

“Some [Muslim] women are happy [dressing] conservative, and some have a different perspective,” she explains. “It’s important to share both. Right now, I feel like the world sees one version, and there are hundreds. I wanted to add to that conversation in a loud and proud way so when people think of an Arab or Muslim woman, they don’t think of it as one-sided, because in reality, she’s very complex.”

With “Inferno,” you can leave your preconceptions of a submissive Arab woman at the door. The song, which begins with, “Sorry I can’t promise forever, amour,” Abir is making a statement on women setting the rules in a relationship, but in an uplifting, empowering way. They’re verses about a woman setting the pace, taking her time to figure out what she wants out of a relationship. While the idea begins from a personal place, Abir knows it’s a point of reference for many others to relate to. “We often associate a man as being non-committal and not looking for anything too serious,” she explains, “But here, I’m telling you I’m controlling [the tempo]. I’m not being too serious yet. If you understand that playing with fire is going to get you burned, but you still wanna hang around, then we can rock.”

In a time when there are discussions about closing borders, when we find unrest and injustice towards the unfamiliar, when we’re still trying to wrap our heads around ongoing racism and our roles in turning the tide, perhaps in some little way the rise of a new genre is part of the healing we need. We end the interview asking Abir how she would describe a Moroccan-American, Muslim woman like herself, and how she’s hoping to shift the current narrative right here, right now.

“To stand in the same room as an Arab woman, you have to have mutual respect for her. She’s strong-minded, she’s compassionate, she has integrity, and she doesn’t take sh*t," Abir says. "Some people think we stay in relationships where we get beat, or live a life unhappy but no, we’re not doing that. We know what we want. Sh*t...an Arab woman is an inferno, I guess.”