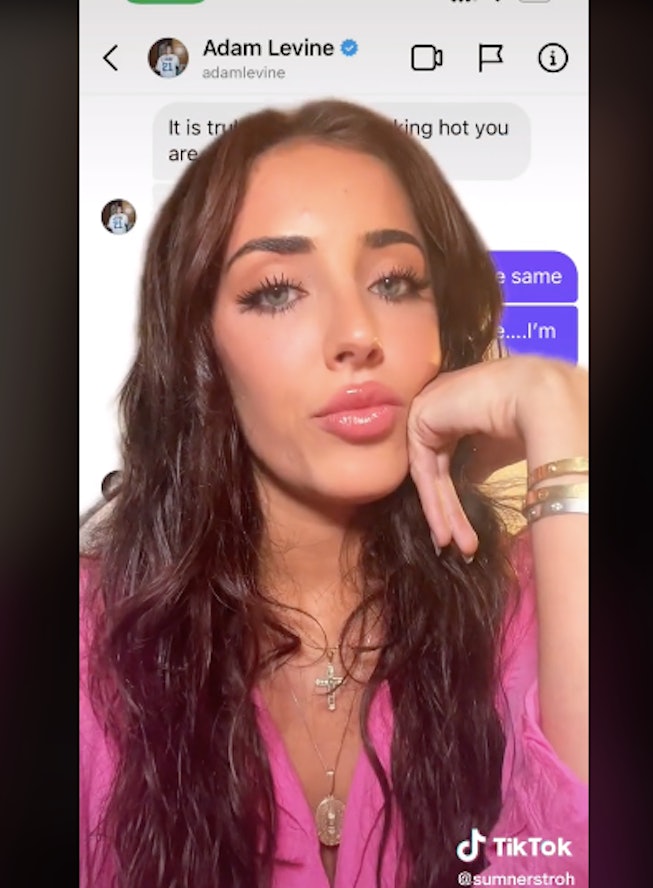 Adam Levine is scrambling to defend himself after being accused of having an affair with the Instagram model Sumner Stroh. In a TikTok posted on Monday, September 19th, Stroh claimed she was having a romantic relationship with the Maroon 5 frontman, who is married to Victoria's Secret Behati Prinsloo. However, in an interview with TMZ published on Tuesday, Levine said her allegations are not entirely true.

“I used poor judgment in speaking with anyone other than my wife in ANY kind of flirtatious manner,” Levine told the news outlet. “I did not have an affair, nevertheless, I crossed the line during a regrettable period of my life.”

On TikTok, Stroh explained that her DMs with Levine were going to be leaked, so she wanted to get out ahead of the story. “Essentially I was having an affair with a man who is married to a Victoria's Secret model,” she said. “At the time I was young, I was naive, I mean quite frankly I feel exploited. I wasn’t in the scene like I am now, so I was definitely very easily manipulated. Maroon 5 is practically elevator music at this point so I’m sure you know who Adam Levine is.” The background of the video shows a series of dm’s between her and Levine. In one message the singer wrote, “It is truly unreal how f*cking hot you are. Like it blows my mind.”

Stroh said she and Levine were seeing each other for about a year. “After I stopped talking to him, over, you know, a period of months, this is how he came back into my life.” Stroh then showed a message from Levine that reads, “Ok serious question. I’m having another baby and if it’s a boy I really wanna name it Sumner. You ok with that? DEAD serious.”

The internet, of course, had a field day with his request. Stroh maintains they had an affair, but Levine insists that they did not. While speaking with TMZ he admitted to “inappropriate behavior,” but nothing else.

“In certain instances it became inappropriate,” he said. “I have addressed that and taken proactive steps to remedy this with my family.” Levine and Prinsloo got married in 2014, after dating for two years. They welcomed their first child, Dusty Rose, in 2016, and their second, Gio Grace, in 2018.

“My wife and my family is all I care about in this world,” Levine told TMZ. “To be this naive and stupid enough to risk the only thing that truly matters to me was the greatest mistake I could ever make. I will never make it again. I take full responsibility. We will get through it and we will get through it together.”

In a “part two” TikTok posted on Tuesday, Stroh said that “hindsight is 20/20.” She also said she was “under the impression that their marriage was over,” and that Levine and Prinsloo were keeping their separation quiet to avoid negative press. She added that she felt “exploited,” because [Levine] “knew I believed everything he said, because of my vulnerable position of being new to LA.” She also said that because Levine DMed her from his verified Instagram account, she had no reason not to believe him, but that she now views that as a “hiding in plain sight” manipulation tactic. She adds that once she realized Levine and Prinsloo were still together, she cut things off, and wishes she had been “less naive.”