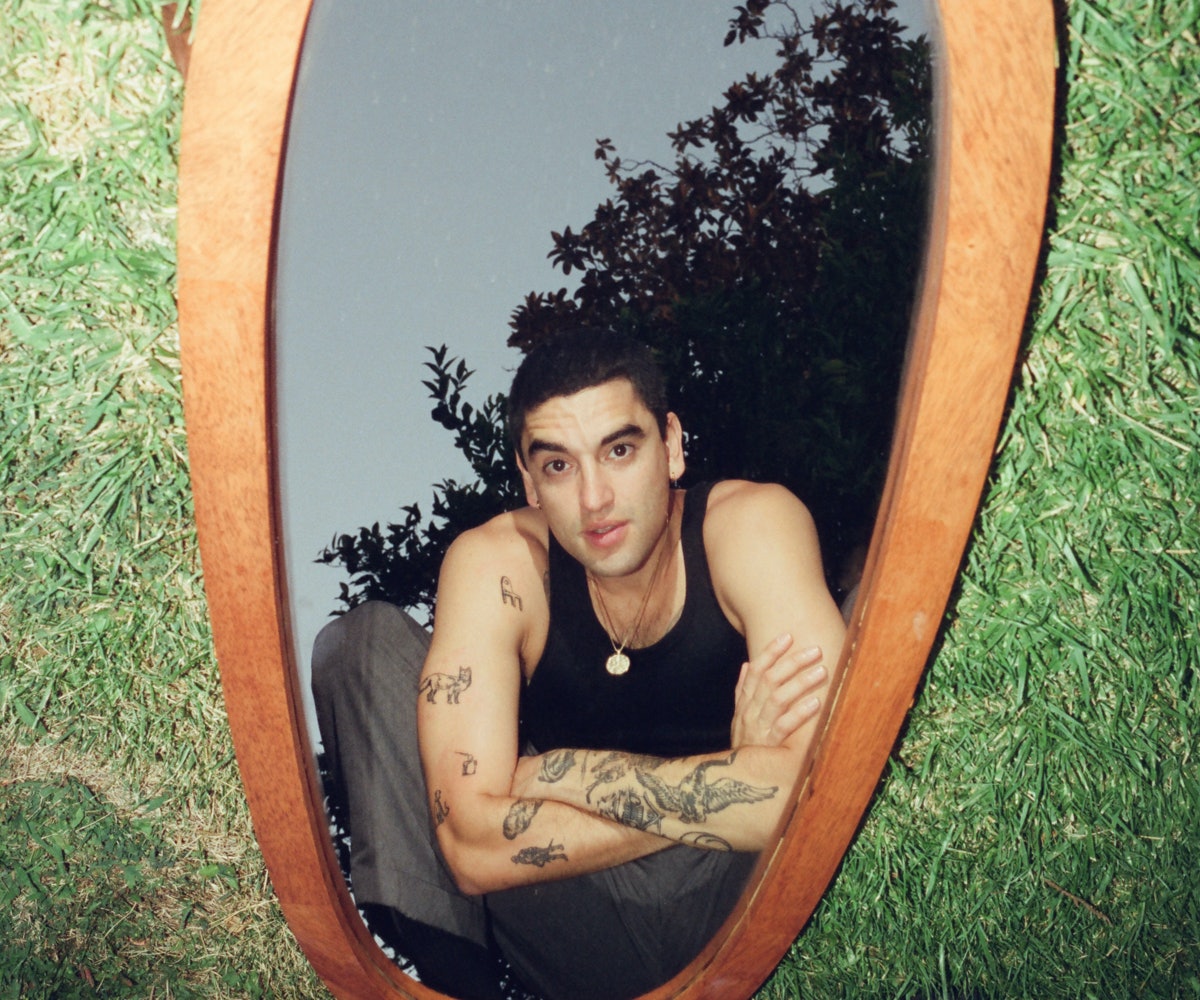 Adam Melchor makes music that feels like the last 10 minutes of La La Land. From moody to melancholy to madly in love, Melchor’s debut album, Here Goes Nothing, out on October 21, explores the merry-go-round of emotions one experiences in the wake of a long distance relationship gone wrong. Composed of 10 soulful tracks deemed as “emo jazz” by his (slightly unhinged) cult of followers, the 26-year-old indie folk artist and New Jersey native has emerged as the latest patron saint of writing songs that make you want to sob alone in your room.

Melchor has been releasing music since 2017, though he first got his start writing songs for renowned artists such as Ashe and The Chainsmokers. After releasing his debut EP The Archer in 2017 and his breakout, yearning acoustic ballad “Real Estate” the following year, he positioned himself as a serious contender in the indie pop genre. In February 2020, Melchor created the Lullaby Hotline, his true claim to fame, which texted listeners new unlisted songs every week and ballooned his tight-knit community of fans who champion his music — and keep him humble — with a familial loyalty. “They’re the kind of people who will always make fun of me, but be the first to defend,” Melchor tells NYLON. “It's like they're a bunch of siblings.”

Ahead of his debut album's release, which Melchor describes as his G-rated way of saying, “f*ck it,” the singer and songwriter spoke with NYLON about being 100 percent vulnerable in his music, the long distance relationship which inspired Here Goes Nothing, and why he hopes his fans never stop bullying him.

When did you first realize your music was resonating with people online?

The first time I realized it was resonating was around the time I started doing Lullaby Hotline, where I was sending songs to people and way too many people signed up for it. I was like, “Oh my goodness!” I thought it was going to be maybe 100 people. That was exciting to me. I'm really bad at texting, so the fact that they were texting me to get these songs on purpose, that was the first “oh shit” moment. People are actually listening.

Your songwriting comes across as very intimate and personal. Do you ever have reservations about getting too vulnerable?

This whole album was written about a specific long distance relationship through the pandemic. I call it, instead of a “breakup album,” a “trying to make it work” album. For this album, I was like, as long as I don't post this person's address, everything else is fair game. Being vulnerable is honestly the only way to go. If you're not going to be 100%, if it's even 99%, maybe don't put out the song yet — just wait until you can be that way with yourself.

Did it take a lot for you to work up to that? In the past you mentioned you had some difficulty being fully open. What was that turning point for you?

Oh man, I think the turning point was the moment where I had nothing to lose emotionally. The recording of the album landed on one of the many times me and this person had broken up. I think it caught me at a great time. My manager would always tell me, "Look, I'm really sorry that you're heartbroken, but we're doing well here!" At a certain point I wasn't even thinking “is this too vulnerable?” or “what is my audience going to think?” That was a time in my life when I absolutely needed to write those songs, just for myself. It wound up being extremely intimate and just one long look in the mirror.

How would you describe your music to someone who has never heard of you before?

I was doing a live stream of the album the other night and somebody was like, "Oh, this is emo jazz music." It was so hilarious to me, because it really is in a lot of ways. I can't call my own music emo jazz… It's way better when somebody on the other side of the world just says it in a comment.

I love that description because it's so true.

It really is. Honestly, the way I would describe my music is the last 10 minutes of La La Land. When it's the sequence of them thinking that it's a thing and then it cuts back to reality and it's like, oh, this guy is alone in the dark playing a piano. That's how I would describe it.

One of my favorite songs from the album is “Cry” because you open up about having difficulty letting your guard down in relationships, which is something many people can relate to. What were you hoping to achieve with the lyrics of that song?

[Cry] was almost like a letter to myself, because there have been so many times where I would tell people, "Oh yeah, just let it out,” but rarely do we take the advice that we give to other people. I try to put this image out that I am stronger than I am, but is not crying strong? In our culture, it's not cool to cry or whatever.

When I was growing up, there was this idea of “manning up” and it's like, what does that even mean? First of all, I don't know what ‘manning’ is as a verb, and then am I supposed to go up? Am I supposed to float? I think it's a little bit archaic. Sometimes I think if I try to be 100% vulnerable in my daily life, I wouldn't have to write so many songs about being not vulnerable. It's a weird thing. Music is so strange, but that's where my outlet is. I'm trying to make real life my outlet too. That might be a lifelong journey

I think a lot of people need to hear that message.

I think a lot of dudes need to hear that message. The person I wrote that song with, me and him are both covered in tattoos. It’s as posturing as you can get.

How would you describe your fanbase?

They're a bunch of bullies and I love it. They’re the kind of people who will always make fun of me, but be the first to defend. It's like they're a bunch of siblings. I really am lucky to have them. Being mysterious isn’t really my thing, but I’ve tried it. Anytime I try to be that way, they’re like, “Okay, we know what you used to do…”

They call you out on it?

Yeah, they call me on it. But it genuinely lets me be as real as possible. It's so much fun to have people interacting like that on a daily basis. I know I can post something stupid and they're all just going to be like, "This is moronic. Don't post this. Put your phone away." There is a powerful Phoebe Bridgers’ quote where she says that the joke of the session is the best part of any sad song, and I apply that to my fan base. Like my songs are pretty sad, so having this sense of humor, it shows all the sides. I appreciate my fans for that and it's fun. I hope they keep bullying me.

I don't think I have ever heard anyone say, “I hope people keep bullying me.”

It keeps me honest!

You said the entire album is dedicated to one person, so I'm curious, were there any songs that were particularly painful to write, or did writing these songs feel more relieving?

There were some songs where I was like, “Oh, this feels good to write!” — but I was feeling terrible at the time. Most of the songs I wrote as a way to be together with myself and be okay with being alone. Take “Rest of My Night” for example. I remember leaving a session and my roommate, his friend, and I got invited to a Christmas party at Finneas’ house. But I was in my head about it and didn’t feel like being social so they went without me. Afterwards, I was on Instagram looking at the party, drinking a beer by myself, and thinking, “What am I doing?” Then you feel like you're missing out. Sometimes these emotional things take you out of real life. Writing songs is a way to ground yourself again. Write some lyrics, figure out what's going on, and then at least you have a song out of it if you missed a cool party. They were cathartic in a way. I would say mostly painful. It's like being in a car accident and then knowing you're in an ambulance. You're like, okay, it's going to get better, but I still just got in a car accident.

Adam Melchor’s ‘Here Goes Nothing’ is out now.