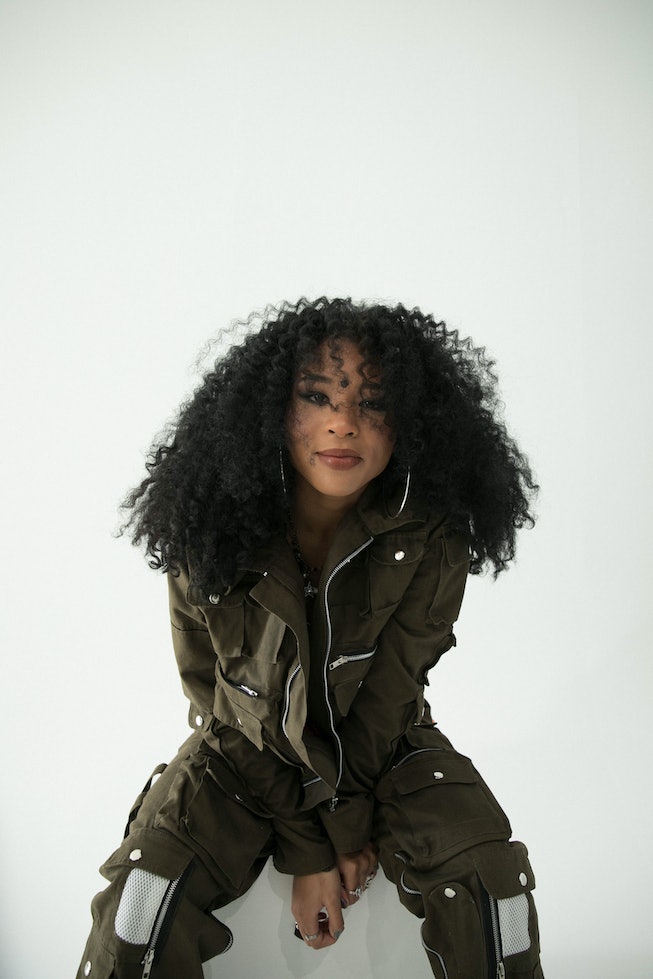 Ai Bendr loves writing songs so much, she even wrote them on the flute when that was the only instrument she had. The half-Nigerian, half-Singaporean-Australian, 18-year-old songwriter says her family originally wasn't supportive of her musical endeavors, but the call to create was too big to ignore, and she spent years writing while away at boarding school or secretly in the basement of her home.

Now, though, the singer has no reason to hide, but rather, to celebrate: her ethereal single "Love Me Low" was featured on the most recent episode of HBO's hit show Euphoria. The standalone episode in which the song appears follows Jules (Hunter Schafer) in the aftermath of her running away from both Rue (Zendaya) and her father in the Season 1 finale. As Jules battles with her demons during an episode-spanning therapy session, she begins to come to terms with the way her relationship with Rue mirrors her relationship with her mother, who, like Rue, is an addict. "Love Me Low" plays during a pivotal scene between Jules and Rue — a moment of release and closure, for audience, Jules, and Rue alike.

NYLON caught up with Ai to chat about the song, being featured in a Euphoria episode, and what's next for her.

Congrats on having your song featured in this episode!

I know. I remember when I first found out, I was so excited because this is one of my favorite shows, and I don't even watch that many shows, to be honest.

How did you get into making music?

I was born in Australia; my mom is an immigrant from Singapore, and my dad is an immigrant from Nigeria. I was kind of raised in that sort of household. But for as long as I can remember it, I've just always really loved music, and I've always really loved writing songs. Before, actually, my parents didn't like it when I sang, and my family just wasn't super supportive of me singing. So for a while, I had done the flute. But even when I was playing the flute, I was always writing songs. Then that eventually just transitioned into writing songs as I got older, and I just got more interested in it. And I decided that I wanted to do it regardless of what people say.

How would you describe your sound or your approach to music and songwriting?

My music is definitely very personal to me. To be honest, I feel like my music is inspired by my life. For all the songs that I have written, there's a direct experience or emotion or something in my life that I can tie it to, and something that sparked the creation of that song. I would say when you're listening to my music, you're really listening to a part of me, to something that I was feeling. I hope people will be able to have a more personal connection with me because of that.

That being said, what was the inspiration behind "Love Me Low"?

Has he heard the song?

Oh yeah. I mean, it's a good song. He thought it was good. And we still have a good connection. We're still friends.

How did you find out that it was going to be on Euphoria?

Oh my gosh. It was so casual. It was a few weeks ago, and the producer that I worked with on the song texted me. He was like, "Hey, Chi, if you have some time, let's get on the phone. 'Love Me Low' is going to be on Euphoria." And I started screaming, and I was like, "What? What? What the f*ck? No! What did you just say?" I remember watching this show for the first time, and like so many other kids my age, I was like, "Yo, this show is so cool." Then I had daydreams about being a character on the show myself, just because... I don't know. It stuck with me or something like that. It was the craziest thing. I know it's very rare for such a small artist like me to get such a big pitch like that.

I've heard that Hunter Schafer is a big fan — and the episode is all about her character, Jules. Have you talked to her at all?

Yeah, just a little bit. I wished her a happy birthday and a Happy New Year because her birthday is the day before New Year's, and she just responded. Oh my God. I was so speechless. She was like, "Hey, you're so cool. I'm so happy that your song gets to be in my show." And I was like, "Aaah!" I was so excited.

Everything's in flux with the pandemic, but what's coming up for you in terms of music?

I think what's going to happen is I'm going to release a single in February. Everything right now is pretty tentative. Over quarantine, I've written so many songs, so many demos, and I'm just waiting to record final vocals on them. I think they sound so good. I think everyone's going to really like them because I really like them. I'm real excited for that.

NEXT UP
Culture
Succession Season 4 Trailer Explodes With Family Drama
Culture
The Biggest Revelations From The Price Of Glee Docuseries
Culture
6 Shows To Binge Once You've Finished 'The White Lotus'
Entertainment
Samia On 'Honey' & Saying The Ugly Part Out Loud
Style + Culture, delivered straight to your inbox.