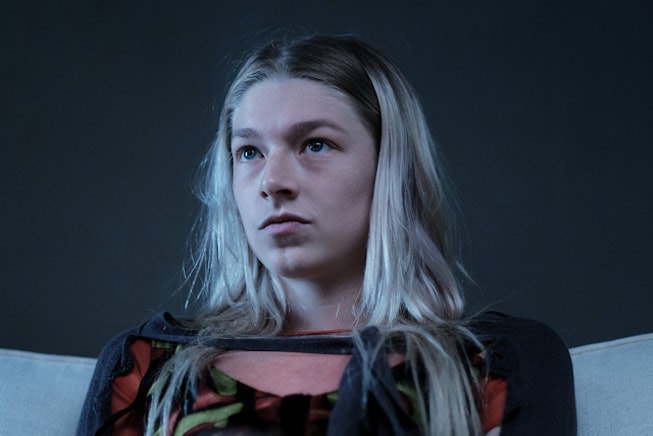 Personally speaking, I'm still reeling from the first "bridge episode" of Euphoria (meant to tide fans over while we wait for the pandemic-delayed second season), which found lead character Rue (Zendaya) solemnly conversing with her quasi-sponsor Ali (Colman Domingo) in a sparsely populated diner following her drug relapse in the first season finale. But whether I am prepared or not, HBO is ready to crush me again with the second and final bonus installment, which turns focus over to Rue's best friend-cum-lover Jules (Hunter Schafer) as she, like Rue, "celebrates" Christmas in a decidedly non-celebratory manner. After revealing that Schafer co-wrote the episode alongside Euphoria creator Sam Levinson last month, HBO has finally shared the trailer for the upcoming episode — and it's clear that we need to mentally prepare.

According to HBO, the second special episode, titled "Fuck Anyone Who's Not a Sea Blob," follows "Jules over the Christmas holiday as she reflects on the year," and based on the trailer, this reflection includes looking back at all the good times she shared with Rue before telling her that she loved her and deciding to board a train to nowhere in the season one finale.

In a voiceover, Jules says, "Rue was the first girl that didn't just look at me. She actually saw me — the me that's underneath a million layers of not me," right before an unknown voice questions, "So why'd you run away?" Other clips show Jules trying to escape from a locked room, screaming out for help, crying, and laying in the sand as a wave from the ocean crashes over her body.

The trailer is made even more exciting by the vivid presence of "Lo Vas A Olvidar" (English translation: "you will forget it"), the brand new original collaboration by former Euphoria soundtrack artists Billie Eilish and ROSALÍA, which will premiere in full with an accompanying music video tomorrow morning.

Watch the trailer below. Stream the episode early on HBO Max this Friday at 9:00pm ET.