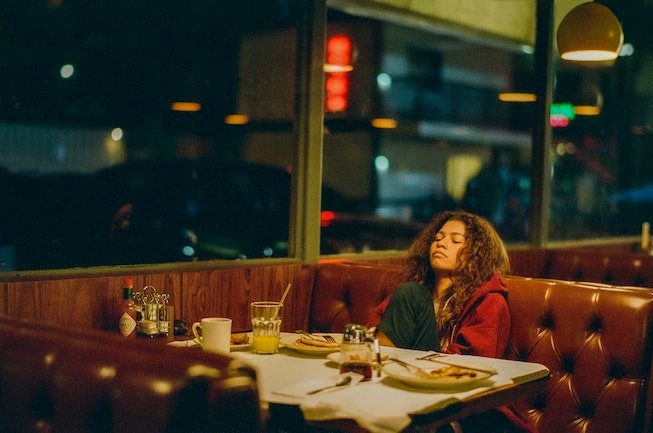 When the season one finale of Sam Levinson's Euphoria aired on HBO in August of 2019, fans and critics alike were divided over the visually rich but vague ending to a series that sparked on-going conversations about the portrayal of the complicated lives of modern teenagers on television.

While there was partial resolution for some characters in that final episode — with Sydney Sweeney's Cassie terminating her pregnancy with the support of her mother, Jacob Elordi's Nate and Alexa Demie's Maddy amicably ending things (for now), and Kat growing in her understanding over her own behavior, there was growth. But series' narrator Rue ended the season with a 15-minute relapse-induced hallucination in which she throws herself off a pile of people wearing red — the fact of Jules leaving her alone at the train station being the catalyst for her downfall.

Where season one of Euphoria was celebrated for its neon-tinged visuals (and makeup) chaotic party scenes and sexual experimentation, the first of two bridge episodes meant to tide viewers over till next season felt like a near complete departure from the rest of the series. This was partially due to COVID, which halted production of season two — aside from a Jules and Rue flashback, the entire episode takes place on Christmas Eve, when we find Rue with her sponsor, Ali (Coleman Domingo) sharing cold pancakes in a diner (surrounded by a neon-lit motel in a nod to Euphoria's visual language).

As Rue and Ali, who've just come from a Narcotics Anonymous meeting, talk, Ali quickly realizes Rue is high and not clean like she's been claiming. Rather than judge Rue, though, Ali uses her latest relapse as a jumping off point into the depths of addiction, depression and the human experience — as the two sit and talk in the diner for almost the entire episode. Rue opens up about her deep self-loathing, cycling through its stages in front of Ali as he painstakingly answers every question and doubt she has. It's an opportunity for viewers to understand Rue better, as she reveals that a previous scene of her and Jules getting matching lip tattoos was only a dream, among other things.

When Rue says she hates herself and that she's a "terrible person," not worthy of forgiveness for things like threatening her mother, Ali explains to Rue — and the audience — how the deadly, degenerative disease of addiction works, and just how much drugs can change a person.

It feels fitting for a teen show, without getting even close to after school special territory. Domingo's performance as Ali is as grounded as Rue is not when they first meet, but by the end of the episode, we have hope for Rue once again. How long that hope will last will be determined by the events of the second special episode — but the conversation between Rue and Ali in this one feels integral to her growth as a character and not likely one she'll permanently forget.