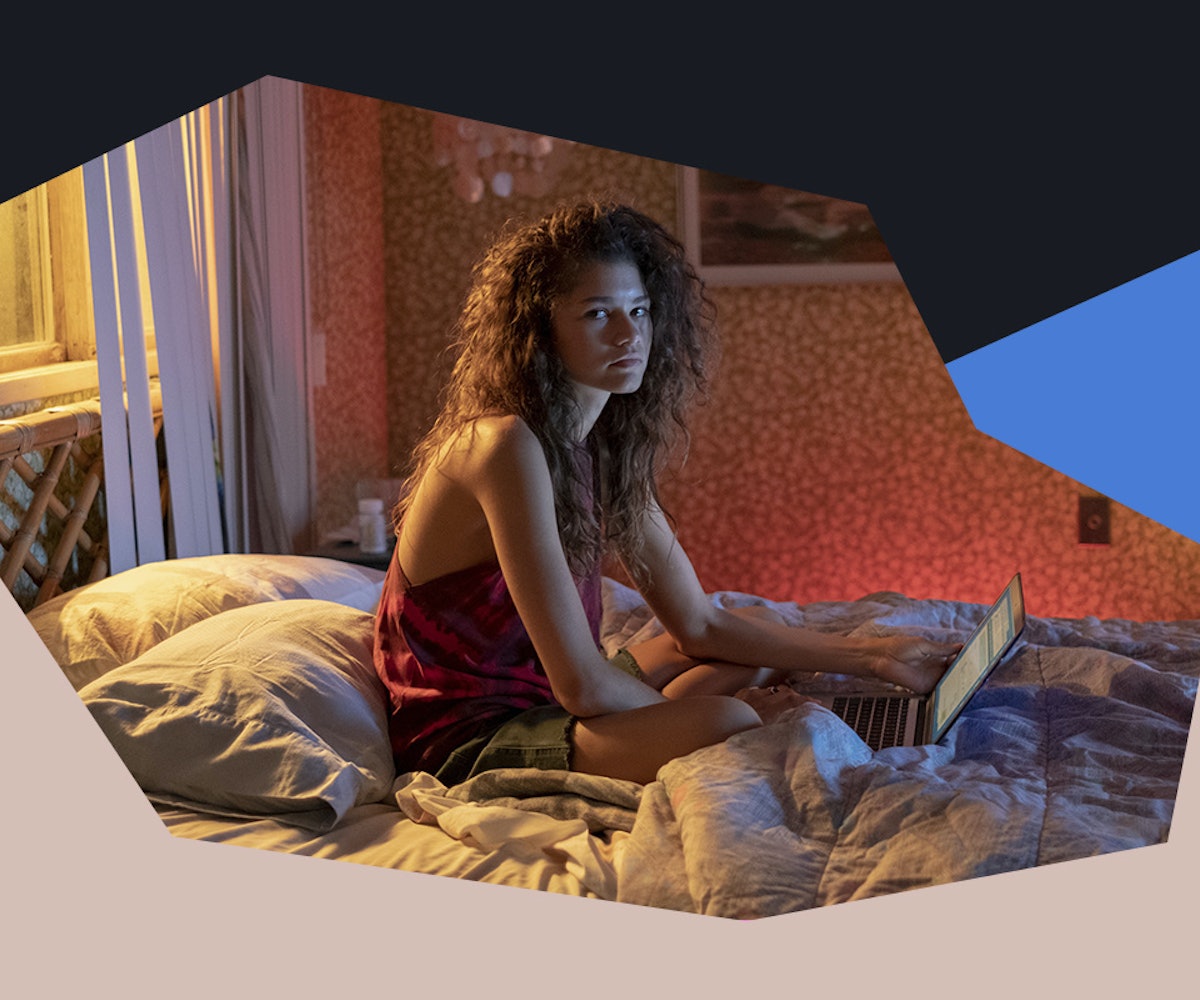 I didn't ask to be born, is something I often think in my darkest moments—or at least, the ones where I'm feeling playful enough to joke about my own nonconsensual mortality. Apparently, that's a sentiment I share with Rue, the protagonist of HBO's new series Euphoria, who is played to perfection by Zendaya. (Trigger warnings: anxiety, addiction.)

"I was once happy, content, sloshing around in my own primordial pool," Rue says in the pilot's opening narration. "Then one day, for reasons beyond my control, I was repeatedly crushed over and over by the cruel cervix of my mother, Leslie. I put up a good fight, but I lost for the first time—but not the last."

I identify with this like an influencer identifies with memes about pizza. I would smash thedouble-tap if this monologue was written in girlish script on Instagram. I'm anxious. Like, all the time. And I panic. And when I panic, and I lose that battle to the unrelenting scream of anxiety, I often wish I could time travel—not back to middle school, not to my childhood, not even to when I was a baby (although being swaddled sounds tight as hell)—but back to the womb. Most days, this world is too much for me, and like a Bizarro Ariel, I don't want to be where the people are; I want to be alone and warm, where I don't have to worry about health care premiums and my inevitable march toward death.

I'm not looking for an anxiety cure-all—because that feels out of reach—I'm simply looking for moments of respite, slivers of peace in a Sisyphean battle with my own brain. Rue's voice-over in Euphoria not only echoed that sentiment with gutting poignancy but also did so in a way that was so jarring to hear that it brought me to tears within minutes.

Now, I have to admit, I was initially skeptical of Euphoria; it's a dark series about the toils of modern teenage girlhood—which was created by a man. That's sus! And it definitely sensationalizes drug addiction, in that it makes a pretty good case as to why we should all be as fucked up as possible all the time. Still, though, Euphoria illustrates anxiety in ways that I haven't seen before on TV—especially when it comes to young women.

The amount of abject terror I hold in my chest every day can be isolating; it's hard to not feel alone when I'm sobbing in a fetal position on my couch, begging God, or the moon, or an alien overlord—whoever is responsible up there—to make me normal, and to give me the mental tools that it seems like most people were naturally equipped with in order to deal with existing as a person in a body. This is not the kind of thing we see often on film and TV.

Sure, there are rare positive and accurate portrayals of people with mental health issues, like in Silver Linings Playbook, or in The Skeleton Twins. But typically, it's glazed over. We don't tap into that darkness, that looming, ceaseless nature of anxiety, and how hard our fights feel—because anxiety is exhausting. The conversation on mental health amongst young women is sparse on-screen, and that's why Euphoria was refreshing for me, even if it was also destabilizing. Upon watching the first two episodes, I was actually happy—and by "happy," I mean devastated—to see the things I feel and endure mirrored on my smudgy laptop screen.

In particular, the following bit of Rue's narration—delivered in a perfectly distressing monotone by Zendaya—playing over a scene in which she experiences a panic attack, brought me to tears:

Every now and then, if I focused too closely on the way I breathed, I'd die. Until every second of every day, you find yourself trying to outrun your anxiety, and quite frankly, I'm just fucking exhausted. And at some point, you make a choice about who you are and what you want. I just showed up one day without a map or a compass, or to be honest, anyone capable of giving one iota of good fucking advice. And I know it all may seem sad, but guess what? I didn't build this system. Nor did I fuck it up.

This monologue led to a scene of Rue getting high, experiencing her two seconds of "euphoria," and a new, similarly heartbreaking narrative stunner:

And then it happens: That moment when your breath starts to slow. And every time you breathe, you breathe out all the oxygen you have, and everything stops: your heart. Your lungs. And finally, your brain. And everything you feel and wish and want to forget, it all just sinks. And then suddenly, you give it air again. Give it life again. I remember the first time it happened to me I got so scared, I wanted to call 911—go to the hospital and be kept alive by machines and apple juice. But I didn't want to look like an idiot. I didn't want to fuck up anyone's night. And then over time, that's all I wanted: those two seconds of nothingness.

I mean, fuck. That monologue told us everything we needed to know about Rue and her afflictions: This is a depressed person. She suffers so often and so fervently from anxiety and panic attacks, that she despairingly tries to allay it through the use of drugs.

This isn't my experience: I don't use drugs like Rue, and I'm privileged to have never suffered from addiction. But the underlying sentiment here—I get it. Being alive is hard. There's no limit to what I've tried and what I will try in search of a nanosecond of peace in my chest. And the hardest part of that quest for silence is the knowledge that, with peace, comes an inevitable return to noise and monotony of anxiety. We "give it life again."

I wish I had something positive to say about how it gets better, but I don't. That passage and the first couple episodes of this show have fucked me up, which is why I wanted to share it, because the profundity with which it fucked me up means something; Euphoria struck a chord in me that didn't want to be struck, but that needed to be. Rue made me feel less alone. Maybe she can make other people feel more alone. At least, she—and Euphoria—can get us talking to each other, get the dialogue started.