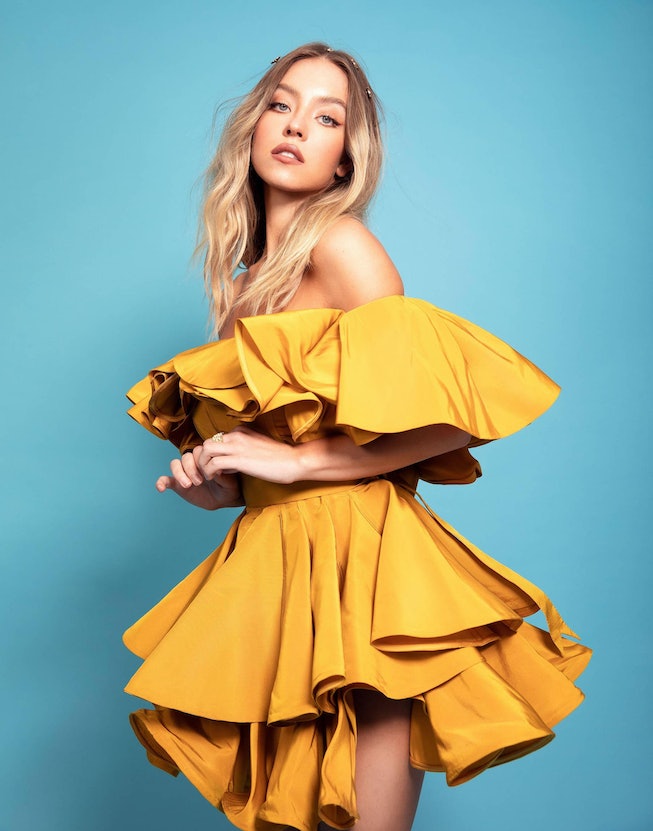 Sydney Sweeney may have won hearts everywhere playing Cassie last year on Euphoria, but the 23-year-old actress has a resume that extends far beyond the hit show. She's had recurring roles on the Hulu's The Handmaid's Tale and HBO's Sharp Objects, appeared in Quentin Tarantino's Once Upon A Time...In Hollywood, starred in coming-of-age drama Clementine alongside Otmara Marrero, and is currently collaborating with friend Halsey on an adaptation of YA novel They Wish They Were Us. In short, she's busy, even under quarantine, and her lead role in Blumhouse Production's Nocturne is just the cherry on top.

In the new thriller, Sweeney plays an aspiring musician at an elite arts academy who begins to be outshone by her twin sister. NYLON caught up with Sweeney, who was spending time with her rescue pups, to chat about Nocturne, dealing with uncomfortable sex scenes and the upcoming bonus episodes of Euphoria.

What drew you to this role? It's such an intense film.

I was coming off of Cassie and Euphoria, and I really wanted something that was just a complete 180 from her. And Nocturne I felt like definitely was. She really had so many psychological challenges and levels to her that I wanted to try out and then challenge myself with. And so I put myself on tape and I auditioned for it.

And did you find the role to be as challenging as you thought it might be?

And so were you a fan of horror films before making this or thrillers, at least?

Yeah, my dad has always been a really big fan. And when I was growing up we watched all the necessary, John Carpenter, and the Scary movies and the Halloweens. I even love the cheesy ones like Halloweentown. I really fall and this time of year. So I was really excited to be part of a Blumhouse project.

Sibling rivalry, to put it mildly plays a really big role in this film. I'm curious if that's something that you have experienced or how did you wrap your head around that concept?

I have a little brother, and he and I are three days apart so the biggest rivalry was who was going to get their own birthday. [laughs] For Juliet I think having a sister and especially a twin sister who does the exact same thing as her, it's very difficult because she doesn't really feel like she has her own path. And like she says, with Jacques' character, she started it and all the sudden he got better than her. And she doesn't know why because she was the one who was good at piano. Juliet doesn't feel like she has anything for herself.

What was your favorite scene to film? And which one was the most challenging?

Favorite scene would have to be, it was such a short scene, but when I was jumping up into the sky, they actually built this whole green screen set with these steps that were floating in the air and it was terrifying but so cool at the same time. I love when you work with special effects and things like that. And then the most uncomfortable scene, I would have to say the sex scene. I was actually really uncomfortable. It was funny because I kept all my clothes on but I still felt uncomfortable. But I guess it's always like that.

I would imagine they're always a little strange.

Yeah. And it was also one of the first days I believe, so I hadn't really gotten to know anyone or Jacques, and it was just diving into this random scene, I was like, ahh.

What do you usually do to get through those moments?

This is probably not the best answer, but I kind of leave myself and I literally become someone else and then snap back out of it.

That makes total sense. Switching gears to Euphoria, is there anything you can share about the two bonus episodes that are coming out to bridge the gap between seasons one and two?

They're definitely happening. I can't really share anything about them, but I'm really glad the audience and fans are going to have a little something to tie the two seasons together and bridge the gap while they have to wait.

Nocturne is available for streaming on Netflix and Amazon Prime.