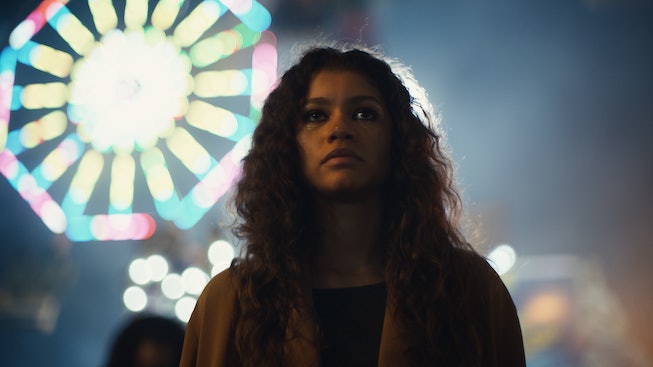 An early entertainment loss to the COVID-19 pandemic was the production delay on Euphoria's second season, which came just two days after HBO first teased fans with some behind-the-scenes shots of the cast reconvening. As far as we know, production on the hit show will not recommence until "early 2021" at the soonest, making a premiere date before late next year incredibly unlikely. But at least creator Sam Levinson has a few tricks up his sleeves to keep fans tided over until then. According to a release, Euphoria has filmed two special standalone episodes — and the first of the pair is slated to premiere on December 6th.

Titled "Trouble Don't Last Always," this first special episode follows Rue in the aftermath of being left by Jules at the train station and subsequently relapsing. Written and directed by Sam Levinson, the episode takes place as she celebrates Christmas. (Yes, it's basically a Euphoria Christmas special. What other present could you want?) In addition to Zendaya, the episode will also star Colman Domingo, who will reprise his season one character Ali. A no-bullshit mentor who Rue connects with at a Narcotics Anonymous meeting, Ali's primary role in season one was to call Rue out on not taking her path to sobriety seriously enough. While HBO hasn't released any other plot details, the returning presence of Ali — and the fact that we now know that Rue did indeed relapse at the end of the season one finale — leads me to believe that this special will follow Rue as she tries to clean up her act yet again, but this time with someone who isn't afraid to tell it to her like it is.

No details have been given about the second special episode, whose title and date are still forthcoming. However, both episodes have been filmed and were produced under COVID-19 guidelines. (Judging from their pandemic output, including eventual Netflix release Malcolm & Marie and these two new Euphoria episodes, it's clear that Zendaya and Sam Levinson are the King and Queen of quarantine filming.)

It's a great time for Euphoria to be returning. Exactly a month ago, Zendaya won an Emmy for Outstanding Lead Actress in a Drama Series for her performance as the show's protagonist Rue — setting a record as the youngest actress to win the award and completely destroying my predictions guide in the process. And that wasn't it, either. That same night, Euphoria's Doniella Davy, Kirsten Coleman, and Tara Lang all rightfully won Emmys for Outstanding Contemporary Makeup (Non-Prosthetic), while Labrinth took home the trophy for Outstanding Original Music and Lyrics (which HBO was surely pleased about, after their heavy promotional push).