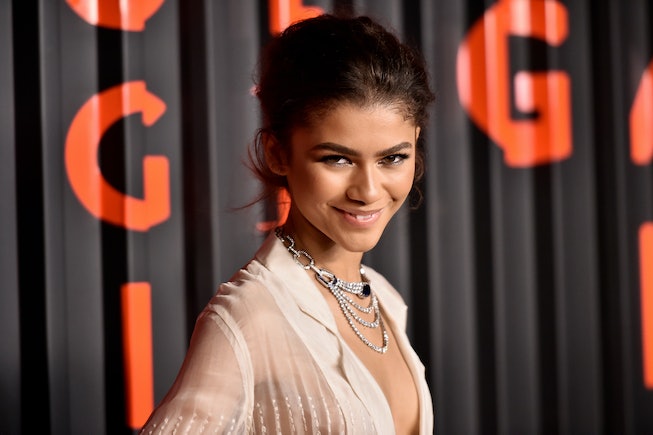 While the status of Euphoria's hotly-anticipated sophomore season is currently still up in the air thanks to COVID-19, fans of the breakout HBO hit can officially get excited for Malcolm & Marie, an upcoming film that reunites Euphoria lead Zendaya with the show's creator and frequent director, Sam Levinson. John David Washington — the son of Denzel Washington who can currently be seen in Christopher Nolan's Tenet — will star opposite Zendaya in the movie, which was filmed entirely during quarantine.

Back in July, it was revealed that the idea to work on something new originated with Zendaya, who was anxious to return to work after production for the second season of Euphoria was put on indefinite hold. She brought the idea to Levinson, asking if he'd be willing to write and direct a film during quarantine, and within six days, Levinson had crafted the screenplay for Malcolm & Marie. Levinson, his producing partners (including his wife, Ashley), Zendaya, and Washington bankrolled the entire production themselves, and filmed in 35mm black-and-white at a glass architectural home in Carmel, California for a little over two weeks. (In a recent InStyle cover story, Emmy nominee Zendaya revealed that, out of safety precautions, she actually wore her own clothes and did her own hair and makeup for the film.)

According to Deadline, Netflix paid $30 million to win the worldwide rights to the film in a vicious bidding war against other buyers from HBO, Amazon, Searchlight, MGM, Apple, A24 and Focus Features. Interestingly enough, most of these buyers were bidding on the film based on hype alone. Aside from a 20-minute promo reel, no one has seen the film yet. Still, early reports have described it as a "romantic drama" that shares a lot in common with last year's Oscar-winning Netflix drama Marriage Story, whose success I'm sure the streaming service hopes to replicate. It is also believed to "resonate a number of social themes that the world is experiencing right now."

And judging from Deadline's plot description — "Washington plays a filmmaker who returns home with his girlfriend (Zendaya) following a celebratory movie premiere as he awaits what’s sure to be imminent critical and financial success. The evening suddenly takes a turn as revelations about their relationships begin to surface, testing the strength of their love" — it's not hard to see the appeal.

We've seen a number of quarantine-specific productions as of late — including Freeform's Love in the Time of Corona, HBO's Coastal Elites, and the surprisingly enjoyable HBO Max cooking show Selena + Chef. But while all of these productions were filmed separately, leading to projects whose "social distance" was noticeable, Malcolm & Marie currently stands as one of the only quarantine-created projects that might end up feeling like a regular production, even if the circumstances behind its creation were specific to the ongoing pandemic.

Either way, we are destined to find out soon. All we need is a release date from Netflix.

Check out a still from the film below.

NEXT UP
Entertainment
Lindsay Lohan Teases Her Return To Film, 'Falling For Christmas'
Entertainment
New 'Emily In Paris' Photos Tease A Romantic Season 3
Entertainment
A New Trailer Explores The Dark Side Of 'Barney'
Entertainment
Paul Mescal & Emily Watson On The Quiet Depth Of 'God's Creatures'