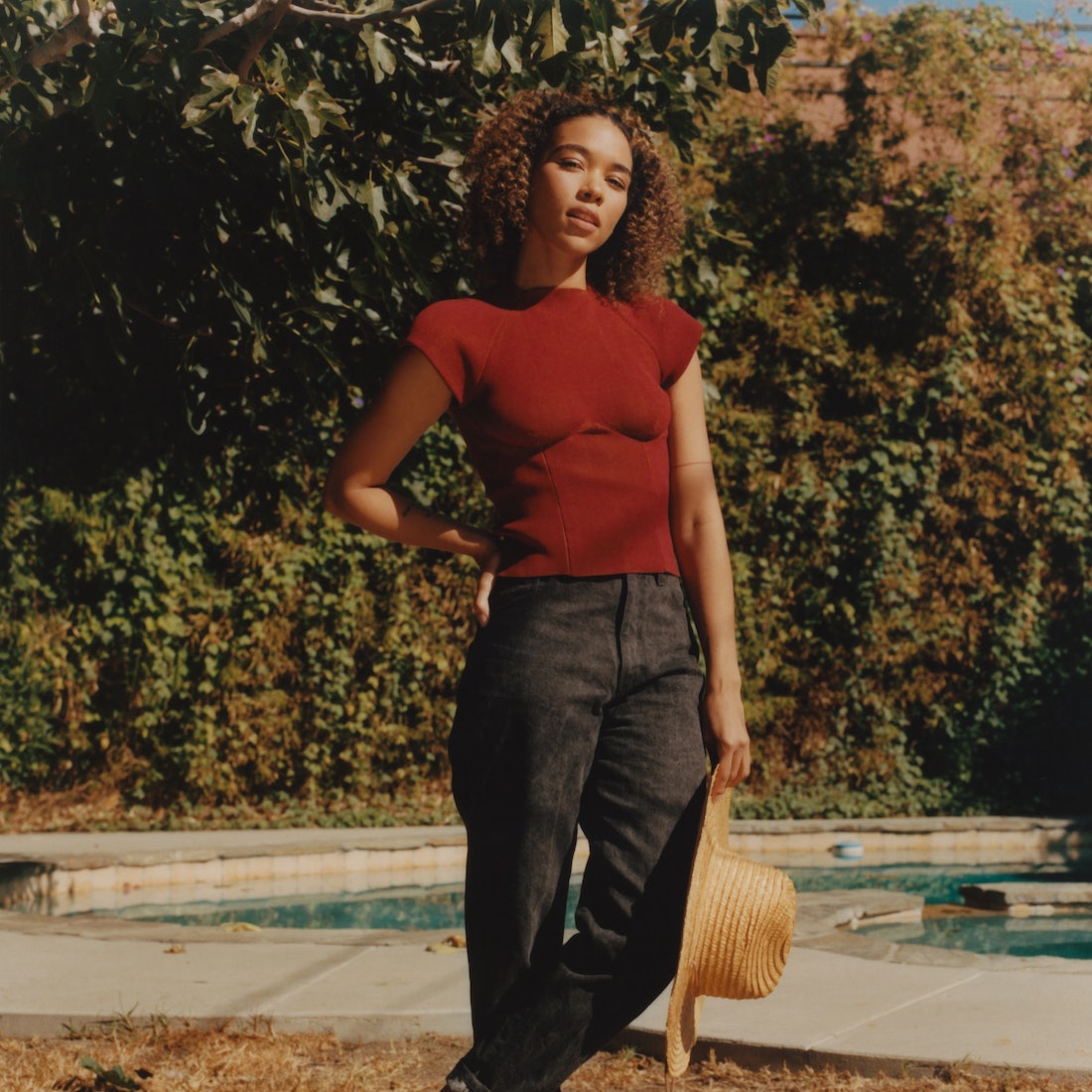 Alexandra Shipp has the rare Hollywood distinction of making one of the world’s biggest directors cry — and over Skype, no less. “For my final audition for Tick, Tick… Boom!, Lin [Manuel Miranda] couldn’t make it to L.A., so we got him on Skype, and Andrew [Garfield] and I in a room together, and we did our lovers’ quarrel scene. After we finished the last take of it, we both turned to Lin and he was crying. ... He was like, ‘That was really great,’” Shipp recalls, chatting over Zoom.

“I felt that if I can make Lin cry on Skype, I was doing my job,” she continues. “I called my agents afterward, and I was like, ‘Look, even if I don’t get this job, I did something that I’m very proud of.’ It’s really hard to get emotion through a Skype! Being able to have that experience with none other than Lin-Manuel Miranda was so triumphant. I was like, ‘I don’t need the job. I already did it.’”

She, of course, got the job. Tick, Tick…. Boom! — which premieres in theaters Nov. 12, with a Netflix release to follow on Nov. 19 — is a film adaptation of the musical of the same name, written by playwright Jonathan Larson as a semi-autobiographical look at his life in the years prior to writing his hit musical Rent. Shipp plays Susan, Larson’s dancer girlfriend, herself struggling to make it in the arts.

As a longtime sideline fan of musical theater, Shipp jumped at the chance to dive into this side of the arts that she previously thought may not be for her. “I’ve never necessarily had a standard musical theater voice, and it always kept me from being able to get cast in things like that,” the 30-year-old says. I got really excited when I heard it was Lin because how many renditions of Dreamgirls can we actually sing, you know what I’m saying? The audition was for the iconic song ‘Come to Your Senses,’ and girl, I gave my best R&B rendition that I possibly could. I said, ‘Let me put some sauce on this burger.’”

For her induction into the world of musical theater, Shipp had the perfect ally to guide her through this new world: co-star and friend Vanessa Hudgens, famously a graduate of High School Musical. The two met while filming another project, this year’s revenge thriller Asking for It, and bonded instantly. “Right away, I was like, ‘I f*ck with you so heavy,’ and she was like, ‘Me too, dude,’” Shipp recalls. “We were each other's saving grace and would spend our off-times hanging out, vintage shopping. She got the role of Karessa, and I was like, ‘Dude, I’m so in love with you; I want to make more movies with you. You are my work wife. The next week I got Susan, and we both were like, ‘Boom, baby, this is awesome!’”

Filming took place in New York over the course of two long stretches, after being temporarily shut down in April 2020 for several months. When filming eventually resumed in October of that year, Shipp found herself especially grateful to have a close friend around while the cast remained in strict lockdown between scenes. “We weren’t allowed to interact with the outside world, so to be able to be locked down with your best friend... let’s just say, like mental health wise, she was a f*cking icon for that,” she says.

While she calls the off-set experience a “slumber party-meets-apocalypse,” Shipp likens the scale of the actual production to her time as young Storm in the X-Men films. “They are such big productions, and there are so many people that are involved,” she says. “There’s also a lot of greenscreen in this film because we couldn’t necessarily shoot on top of a building at two o’clock in the morning — that doesn’t really work for New Yorkers. There was a lot of soundstage stuff, but it was really beautiful because everyone there loved Jonathan Larson. Everyone there wanted to do a good job. Everyone there was a total theater geek.”

One thing she had yet to conquer in her many years controlling weather and taking on intense stunts, however: modern dance. “I am not a dancer. I am so not a dancer,” she admits. “It’s not even funny.” She took to training five to six hours a day with choreographer Melissa Schade to get to a point where she could confidently play someone who is, indeed, so a dancer. “She taught me how dancers walk. She taught me how dancers stand. She taught me all of the basics when it comes to ballet; she incorporated a lot of modern ballet in with it.” The result is one of the film’s standout moments, a highly technical contemporary dance sequence that Shipp sells with aplomb.

Taking that leap into the unknown, pushing herself to do something out of her comfort zone, prompted Shipp to take a similar leap in her own life: In October, she released her first single, “Dirty Long Sleeve Shirt,” after decades of keeping her music to herself. “When I originally moved to L.A., I wanted to be a songwriter,” the Arizona native says. “I just loved the idea of being able to write all different kinds of music for all different types of people. And then when acting really started to hit off and I was booking more jobs, I just knew that’s the way the universe wanted me to go. I still take my guitar with me on every job, and I found myself losing my mind a little bit, locked away like Rapunzel, so I started to just write songs about random things in my apartment.”

Early songs were about a chair, a tampon, trash cans (“aka men,” she clarifies). Then came one about a long-sleeved shirt left from a significant other out of town. “At first I was like, ‘No one’s going to get this song,’” she says. “And then after a while, I was like, ‘Actually, this is my favorite song. And I want to share it with everyone.’” Together with a group of friends and Schade, she put together a music video for the track and released it into the world. “My higher power was just like, ‘Girl, do what you love and don’t stop doing it.’ And I was like, ‘OK, girl.’ So I did it. I put it out. It was the scariest thing. I’m sweating talking about it.

“There’s something so personal and sacred about music and showing people music that you wrote,” she continues. “I’m giving people a piece of my heart every time I play them one of my songs. You’ve got to be specific with your intentions on that.”