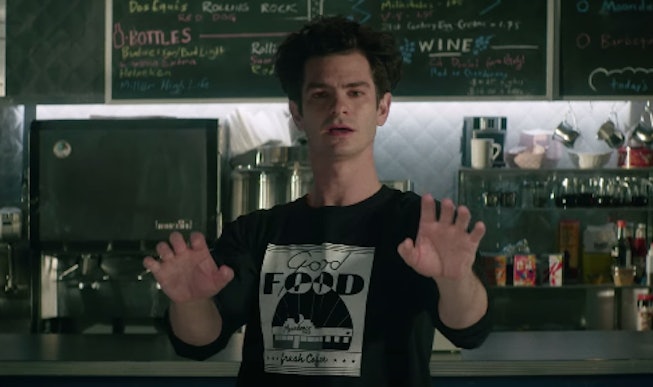 Lin Manuel Miranda has done it again. After creating the mega-successful Hamilton, producing the newly released In the Heights, and (kind of quietly) providing the soundtrack to Moana, he is back with another theatrical treat.

Tick, Tick...Boom is Miranda’s latest venture — and directorial debut — starring Andrew Garfield as Jon, a “young theater composer who’s waiting tables at a New York City diner in 1990 while writing what he hopes will be the next great American Musical.” Netflix released the film's trailer today, which opens with Garfield singing “This is the life” — quite well, may I add — before hopping on a table.

The film is an adaptation of a semi-autobiographical musical of the same name, written by Jonathan Larson, whom you may remember as the playwright for Rent. Larson reportedly created Tick Tick...Boom first, but passed away before it was turned into an off-broadway musical in 2001. Similar to predecessor, Tick Tick...Boom also explores a group of young artists working during the AIDS epidemic. The respective plots, however, are not directly related.

The trailer for Tick Tick...Boom features a star-studded cast. Vanessa Hudgens, Alexandra Shipp, and Jordan Fisher are all a part of the ensemble. Bradley Whitford, from The Handmaid's Tale, was not featured in the teaser but plays a man named Stephen. If we’re lucky, he might also be singing on camera for the first time ever, like Garfield.

In an interview with Jimmy Fallon, Garfield shared what it was like to work with Miranda on the project. “You know Lin,” he said, “he’s like a crazy mixture of the most precocious eight-year-old genius student of life that won’t stop talking and has a reference to everything, while simultaneously being one of the greatest creative geniuses of our time.”

To his credit, Miranda did just perform a confusing but genius musical, about missing musicals, on The Tonight Show — despite the fact that he never stopped making them. And if that's the sort of thing you're into you’ll love Tick Tick..Boom, which premieres on Netflix and in select theaters this fall.