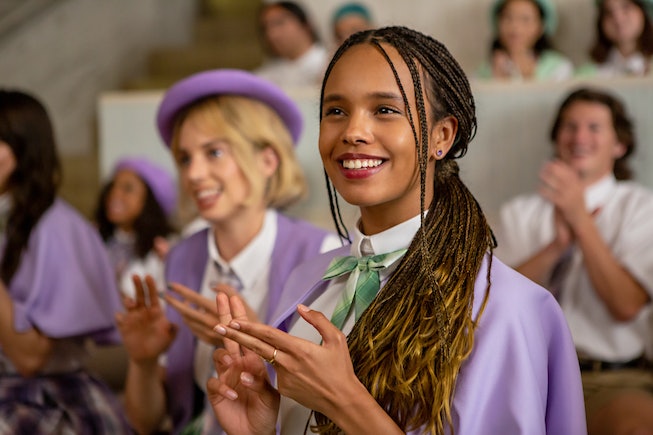 Netflix’s new original film Do Revenge explores what happens when you fight fire with fire. The upcoming dark comedy, out September 16th, follows two teenage girls who agree to take down each other’s nemesis.

Alisha Boe — the 25-year-old actress best known for her breakout role as Jessica Davis in 13 Reasons Why — stars alongside Stranger Things’ Maya Hawke and Riverdale’s Camila Mendes in the film as Tara, a popular kid with questionable morals. “I read this script that was just so exciting and funny and dark, but also different and unexpected. And I just needed to be a part of it,” Boe said.

Inspired by Alfred Hitchcock’s 1951 thriller, Strangers on a Train, the chaotically funny Do Revenge begins with a nightmare of the digital age. When Drea Torres’ (Mendes) sex tape is leaked to her entire school, her inner circle and best friend (Boe) turn against her. Drea suspects her boyfriend, Max (Euphoria’s Austin Abrams), is to blame, but his pseudo-woke persona saves him from any public scrutiny. In a classic send-up of the social hypocrisy of high school, she’s outcasted instead. With no friends or hope for the future, Drea concocts a devious plan to ruin her ex’s life, and enlists the help of Eleanor (Hawke), another social outcast who has her own reasons to seek revenge. The result is a rage-fueled tirade that leaves no one unscathed.

Boe’s role in the film is a stark departure from the characters she’s known for. In Do Revenge, the 26-year-old actress trades her likable girl-next-door persona, for a complicit bully who’d rather protect her own reputation than help a friend in need. Ahead of the film’s premiere, Boe spoke with NYLON about what drew her to the project, how she does (and doesn’t) relate to her character, and why revenge fantasies aren’t as simple as they seem.

What excited you about Do Revenge?

I read the script after a couple of months of being [in quarantine] — it was like 2020 so I'd been in my apartment all day, like everybody else, and I thought I was never going to work again in my life. I was very with the world at the time of how we were all feeling, and then I read this script that was just so exciting and funny and dark, but also different and unexpected. And I just needed to be a part of it. It was just such a fun read. So I really loved it, and I loved [director] Jenn Kaytin Robinson, because years ago my mom and I watched her other film Someone Great, and we really bonded over it. We watched it four times or something — it became our bonding movie.

Do you relate to your character?

[I] definitely have no idea what world she lives in, [in] terms of just extreme wealth. I just didn't even grow up close to whatever world they are all in. I couldn't relate to that. I think what I do relate to is being in high school and trying to figure out where I need my validation to come from. That time in your life when you're worried about what others think of you rather than who your close friends are, or canceling out that outside noise of who you should be instead of who you want to be.

That's what really drew me to Tara, you get to see her kind of come to a realization of everything is kind of bullshit besides the people you really love and care about, and that's important. And you see her mess up and be a terrible person as well, but I think that's the major lesson that's really nice to see. I think a lot of people go through at that very delicate age of being a teenager.

If one of your friends asked you to help them with a revenge plot, would you do it?

No! I would tell them to get help immediately. I don't think doing revenge on someone is a productive way to spend your time. It's exhausting and you're not going to feel better by ruining someone else's life, ever.