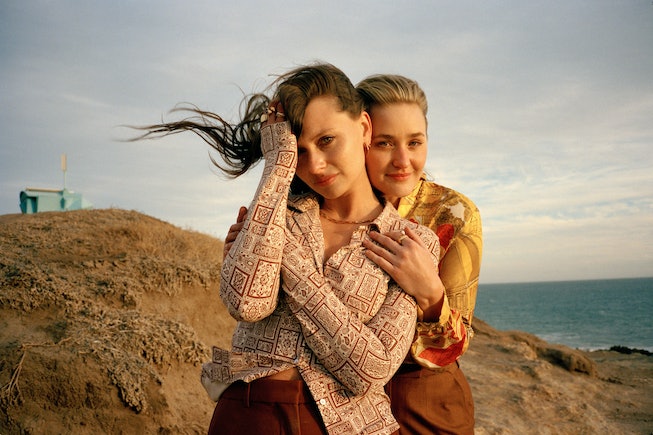 It's a cool spring day in Los Angeles and Aly Michalka has just returned from the dentist. Because between press interviews, prepping for a virtual concert and all the other elements that make up a to-do list on the eve of a major release, even pop stars have errands to run. “Just living the life, dental appointments and all!” quips AJ Michalka, Aly’s younger sister and the other half of the siblings’ eponymous pop-rock act, Aly & AJ.

Of course, the sisters have much more on their minds than dental appointments these days. On Friday (May 7), the duo released their long-anticipated fourth studio album into the world after a nearly four-month roll-out campaign that included five pre-release singles, an equal amount of corresponding music videos, a release-day live show at the Theatre at Ace Hotel in downtown L.A. and a long-awaited tour set for 2022 across the U.S. and Europe. Titled A Touch of the Beat Gets You Up on Your Feet Gets Out and Then Into the Sun, the 12-track collection is the band’s first full-length release in 14 years, and marks the culmination of a comeback they’ve steadily been mounting for nearly half a decade.

Written over a year and nine months and recorded during the coronavirus pandemic, A Touch of the Beat Gets You Off of Your Feet Gets You Out and Then into the Sun, finds the Michalka sisters exploring a veritable treasure trove of emotions, from the quiet, swaying romance of “Slow Dancing” to the devastating gut punch of standout ballad “Stomach” and jaded disdain over attending yet another glitzy Hollywood party in “Personal Cathedrals.”

And while the LP, which takes its tongue-twisting title from the central line of album highlight “Don’t Need Nothing” follows closely behind Aly & AJ’s two most recent EPs — 2017’s Ten Years and 2019’s Sanctuary — its sound is a sonic pivot away from the ‘80s-inspired synth pop of its predecessors. (Though AJ does reveal that “Slow Dancing” began life as an uptempo bop, complete with a four-on-the-floor beat and heavy synth, before being reshaped into the album’s subtly lovely lead single.)

Instead, A Touch of the Beat... is awash in sun-drenched guitars, luminous melodies and an indie rock sensibility that’s been bubbling just under the surface of the sisters’ craft dating all the way back to the Disney-fied pop-rock of their days at Hollywood Records. It’s a shift both siblings credit to collaborating with executive producer Yves Rothman, who helped them finally let go of, in Aly’s words, “the pressures of needing to deliver sparkly pop songs” after a decade and a half in the spotlight.

“I think it was just a matter of him validating all of the feelings that we've had all of these years, and we've just never been quite brave enough, I guess, really, to be completely honest, to just make that record,” Aly says of working with Rothman. “To make the record without the pressures of a label...of writing for radio. To make a record that felt like the kind of music we listen to in our homes. I think that was kind of the goal from the start for AJ and I.”

When it comes to the music the sisters love, the answer might surprise casual fans who still think of them as a pair of bright-eyed blonde girls who got their start in Disney Channel fare like Phil of the Future and Cow Belles.

“Aly and I listen to a lot of old music. Like, we love classic rock,” AJ says. “When I put music on in my car, we're listening to Crosby, Stills & Nash, I'm listening to Janis Joplin. I live in Grace Slick's old house, I listen to her music. We love inviting the warmth that classic rock has, and the storytelling is so different...And you know, we listen to modern pop and we try to stay up on the current climate of music. It's important to listen to modern pop 'cause I think that's what's guiding the sound for the next generation.

“But yeah, classically, Beach Boys, Van Halen, The Rolling Stones, Heart...we just have a very eclectic old-school taste,” she continues. “It's fun to talk about now that we have a new record out 'cause people don't really know what we listen to. And it's really opened up this landscape of just what we're capable of doing as writers that we didn't even know we were.”

That reverence for rock’s trailblazers, particularly the female singer-songwriters who paved the way for the sisters’ new alt-leaning sound, also bleeds into the album’s pair of collaborations. While not credited with an official guest feature credit in the liner notes, that’s none other than Melissa Etheridge playing the haunting guitar line on closing ballad “Hold Out” and Nancy Wilson of Heart — the sisters’ longtime de facto mentor turned close friend of 10 years — providing both guitar and backing vocals on anthemic second single “Listen!!!”

And yet, this new era also unquestionably came together with some help from Aly & AJ’s own past, thanks to the unexpected revival of “Potential Breakup Song” — the duo’s platinum hit from 2007’s Insomniatic —going viral on TikTok during the pandemic, nearly 14 full years after the song first peaked at No. 17 on the Billboard Hot 100 the summer after its initial release.

“It all kind of worked out weirdly [perfectly] because of the whole TikTok thing,” Aly acknowledges. In fact, just weeks after releasing “Slow Dancing” in December, the sisters closed out the year by capitalizing on the TikTok-induced craze and gifting fans with a special surprise: a newly-recorded, decidedly grown-up version of “Potential Breakup Song” complete with the explicit lyrics they’ve been performing at live shows for years.

“I feel good about it because the resurgence [of the song] gave Aly and I this organic opportunity to re-do it after 14 years. Which we wouldn't have done,” AJ admits. “I'm really proud of the new production. I think it's mixed a lot stronger, I think the instrumentation's better, I think our vocals sound better. You know, when something's 14 years old, you hope that you can improve it. And I really think we did that.”

Long gone are the overabundant Auto-Tune that defined the original verses (well, mostly) and kid-friendly lines like, “It was my birthday/ My stupid birthday,” replaced with updated production and a few expertly placed profanities that make the vindictive rage of the foreshadowed split at the song’s center all the more sweet.

However, Aly is quick to admit that some parts of recreating the delicious electro-pop kiss-off were easier said than done. “We're trying to honor the original without going too far off [base],” she says. “It's funny, it was hard, actually, to re-sing, in a weird way. Because I sing the verses a lot looser live. And so I was trying to copy the way that I sang it originally, and I was like, ‘Gosh this is hard, this is almost like an impossible melody. Like, why did we write this melody this way? This is so weird, it's like not even human to be able to sing this.’ But it ended up being really fun, and I think like AJ said, it gave us the opportunity to make better choices on the production.”

“It was crazy to unearth the old vocals,” AJ adds of revisiting the original master of the track, “and kind of pull out the ad libs and the harmonies and listen to how young we sounded. Because we were literally hearing ourselves as, like, 15-year-olds. And it was bizarre to hear how much our voices have changed.”

While the reasons behind each may be wildly different, it’s easy to draw a parallel between Aly & AJ re-recording the biggest hit of their career and recent similar efforts by other female pop stars like Taylor Swift and JoJo remake their past albums from scratch.

“It's definitely cool,” Aly says of the growing trend of artists fighting to reclaim ownership of their music from labels, often predatory recording contracts and other third parties. “I think that there's a lot to be said about the artists that are going back and choosing to record the songs that really put them on the map. And to do it with the ability that they now have in terms of the power that it gives them to own those masters is really incredible. I think the story that Taylor is telling by choosing to re-record them and saying, like, ‘I'm gonna take the power back’ is really great.”

That being said, don’t expect new versions of the rest of Insomniatic or 2005’s Into the Rush from the Michalka sisters any time soon. Instead, the sibling act is laser-focused on their newest album...as well as the next one to come, which Aly reveals they plan to begin writing in June. In fact, both sisters agree that their younger selves would be most proud of the music they’re making now and just how far they’ve come. (Though AJ does name fan favorite “Rush” as the track she’d choose to give new life should she and Aly ever revisit another song from their Disney Channel days in the studio...)

“You know, as teens, we were very precious about our songwriting,” AJ says. “Everything had to be written by us. And it was very important who sang what, and we really wanted people to know we were writing our own material. And now, there's this effortlessness with the albums that we're making that just feels very organic and raw to who Aly and I are...I think if we were looking back on our younger selves, we would be very proud of this era of Aly & AJ.”

“More than anything, I think we would just look at each other and be like ‘Wow, we really did it,’” Aly concurs. “And we came a long way. This has been a long journey, a lot of winding roads but eventually we got there.”

A Touch of the Beat Gets You Off of Your Feet Gets You Out and Then into the Sun is out now. Stream the full album below.