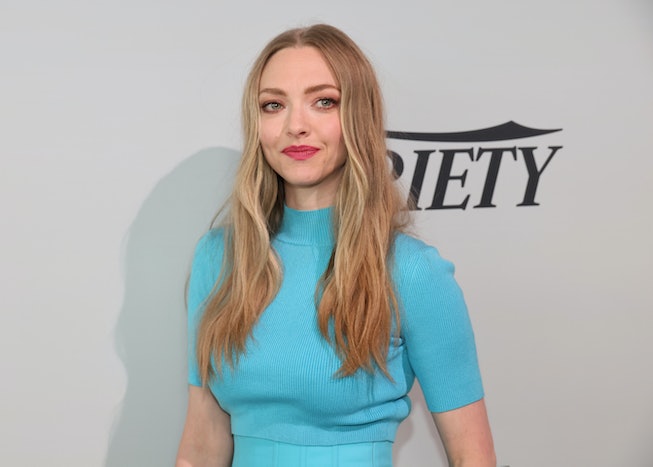 Before she thrilled the internet with her husky-voiced take on Elizabeth Theranos in The Dropout, Amanda Seyfried already had a rich career filled with star-turning roles. There have been many memorable hits, including Mamma Mia and Jennifer’s Body, but it was her role as archetypal dumb blonde Karen in Mean Girls that really shot her to fame. Now, Seyfried is reflecting on the discomfort all that limelight brought with it, especially at a young age.

In a new interview with Marie Claire, Seyfried explained that men often harassed her after she starred in Tina Fey’s scripted comedy. Of her character’s many one-liners, the moment she grabs her own chest to tell if it’s raining or not stands out as one of the silliest. After the film's premiere, Seyfried says men would approach her and ask if it was raining, in reference to a scene in the film where she confirms that it is while holding her breasts in a storm.

“I always felt really grossed out by that,” Seyfried said. “I was like 18 years old. It was just gross.” Following her role in Mean Girls, Seyfried starred in Dear John, Mamma Mia, and Letters to Juliette. Her superb acting skills made her a household name, but Seyfried was not interested in fame and still doesn’t seem to be.

“I think being really famous [young] must really fucking suck,” she said, reflecting on how young actors navigate Hollywood. “It must make you feel completely unsafe in the world.” At the height of her own career, Seyfried purchased a farmhouse in the Catskills to escape the limelight and public scrutiny.

Though she values privacy, Seyfried’s distance from Hollywood has not hindered her career. Her latest role as Elizabeth Holmes, the controversial medical engineer in The Dropout, has garnered rave reviews and a rumored Emmy nomination.

The official nominee list has not been revealed yet, but the ceremony will air later this year on September 12th on NBC.