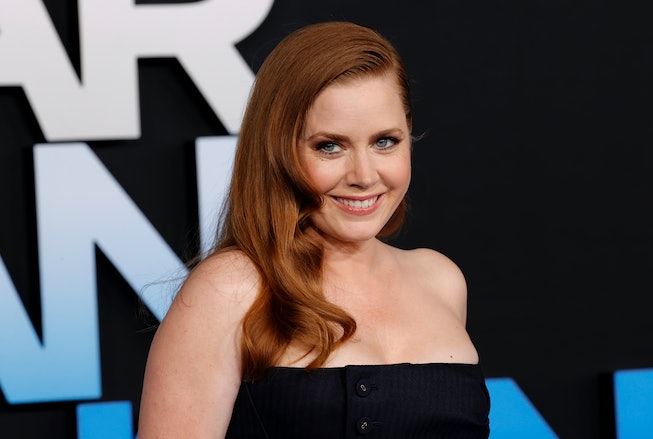 Amy Adams will star in an adaptation of Rachel Yoder’s acclaimed debut novel, Nightbitch, in which the lead protagonist finds herself believing she’s turning into a dog.

The novel came out last summer, and the adaptation is being written and directed by Marielle Heller. The “darkly comic neo-horror” movie is currently in pre-production, and should begin filming this September, with six-time Oscar nominee Adams at the helm. The film will eventually stream as a Hulu Original.

According to the official logline, Adams stars in the project as a woman “thrown into the stay-at-home routine of raising a toddler in the suburbs, who slowly embraces the feral power deeply rooted in motherhood, as she becomes increasingly aware of the bizarre and undeniable signs that she may be turning into a canine.”

“Rachel Yoder‘s book took my breath away,” Heller told Variety. “I haven’t felt this way about a book since I read The Diary of a Teenage Girl many years ago. Rachel’s darkly hilarious tale of motherhood and rage made me feel seen. And adapting it with Amy Adams in mind has been the thing that has kept me going through the pandemic.”

Nightbitch received mostly positive critical acclaim when it debuted in July of 2021. In her review for The New Yorker, Hillary Kelly wrote, "The two predominant strains of maternal commentary in the twenty-first century can be summarized as 'Mothers cannot possibly do all that is asked of them' and 'Mothers are capable of anything.' Each affirms the other: mothers simultaneously cannot live up to both maxims, and they have little choice but to try...Yoder believes both, and neither, and her novel happily occupies a floating realm between them."

Adams most recently starred in Hillbilly Elegy (2020), The Woman In The Window (2021) and Dear Evan Hansen (2021). None of the films were particularly well-received, but Adams’ performances were praised nonetheless.

Given the success of this year’s The Lost Daughter, in which Olivia Coleman, Jessie Buckley, and Dakota Johnson’s characters represent different stages of at times reluctant motherhood, it seems Nightbitch will add another layer to the conversation around what it means to be a modern mother.