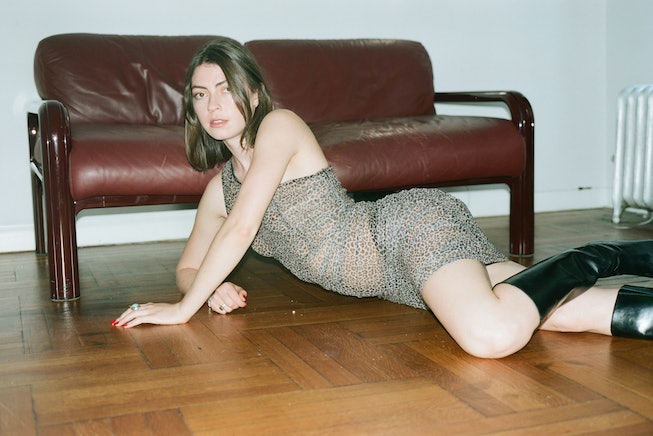 Anna Shoemaker wants to feel everything, even if it’s ugly. She doesn’t just make you feel seen for your feelings of heartbreak, delusion, and self-sabotage through her two gooey synth-pop EPs — she’ll literally talk to you about your breakup in her DMs.

At Shoemaker’s July show at the Jane Hotel in Manhattan, hosted by Unnecessoirée (“a party for no reason”), I’d never seen so many camera phones. A small army of women in loafers and plaid skirts bumped their baguette bags against each other as they scrambled to get closer to her, shouting requests and singing along to every word. For Shoemaker, who has a debut album due out in spring 2022 via Plus 1 Records, it’s a response she’s gotten before in her Instagram DMs.

“I think that because I’m so honest in a lot of my lyrics, sometimes people will reach out to me on Instagram and be like, ‘Oh, I really connected with this’ and I'll just talk to them,” she told NYLON over the phone from her Brooklyn apartment. “I’m obsessed with people feeling their feelings.”

This impulse to feel is evident in Shoemaker’s lyrics, which are always self-aware, confessional, and utterly unafraid to lean into — even celebrate — the ugly feelings that come with relationships: self-sabotage, not playing it cool, missing people you shouldn’t, and not being ready to give up things you should. On her latest single “Sick,” she sings: “I've been feeling sentimental/ Crying in the bathroom/ I could get my shit together/ But I just don't want to/ Is it sick I like missing you?” She wears her heart on the sleeve of her cheetah print mesh dress, making music that compels you to ask her: Did this happen to you too?

With a devoted fandom, bold, personal lyrics, and an accessible but effortlessly cool demeanor, Shoemaker feels like Brooklyn’s own Olivia Rodrigo, but one who’s been jaded by one too many disappointments, and can both mourn the feeling of missing her ex as she drives by the liquor store near his house, as well as soak up the feeling like a bottle of Veuve.

NYLON spoke with Shoemaker ahead of her next show about exes who checked in during quarantine, Taylor Swift, and the self-soothing act of writing.

You are very confessional in your songs. One thing I really related to is that you talk a lot about self-sabotage that can happen in relationships and that is not something that people are willing to talk about all the time.

I don’t necessarily write songs with the intention that people will hear them. I just kind of write in my room or the studio and then when I put them out, I feel like I've listened to them so many times at that point that I’m kind of numb to it. But people will be like, ‘Oh my God, is this about blah blah blah blah blah?’ There’s definitely a lot of self-sabotage. I also think that comes from being an artist. I used to think that I’d have to ruin my life to write songs or sabotage relationships or do things like that to make art or I had to be sad or I had to be certain emotions, instead of learning how to tap into it naturally.

That’s such a real thing. Are you ever like, “Oh this sad thing is good because it’s for the art?”

Yeah, for me it’s more in the moment. Being an artist is hard because you always feel unproductive because you can always be doing something. It's not like a 9 to 5 job. It’’s like, if I’m sad, I could be writing, if I’m happy, I could be writing. I always feel like there’s something I should do and then you’re on Instagram and you always feel like there’s someone doing everything better than you or getting on the playlist you want to get on. It's definitely hard sometimes, but when I focus on the writing, that's when I’m the happiest.

On “Sick,” you’re singing in your room about missing someone you shouldn’t be with and liking that feeling. Where does that energy come from?

I’m obsessed with people feeling their feelings. I love to feel all my feelings. I just think it’s so important to experience how you're feeling and not swallow anything down and whether that’s pain or sadness or happiness. If you're super anxious, I try to be like, “This is a good thing that I’m anxious.” This is a good thing I’m upset because how would I ever know anything else? If you’re happy all the time, that’s so not useful. You need to experience a range of emotions.

With “Sick” especially, it was during the pandemic and I was mistaking my loneliness for missing someone and I look back now and I was trying to say, “Is it messed up that I miss you?” But I didn’t miss them at all. It was just this loneliness that can be so dangerous, especially during the pandemic. A lot of my friends were texting their exes again and it’s like no, that’s not a thing anymore.

I feel like every ex “checked in” during the pandemic.

Totally. It’s like, ‘No. What? This is still a no!’ We don’t need to make banana bread together.

You got your start with a Soundcloud mashup of Kendrick Lamar’s “Bitch Don’t Kill My Vibe” and Chance the Rapper’s “Cocoa Butter Kisses” that went viral. When and how did you first get into making music?

I was always a writer and I always wrote when I was little. I was really into poetry and I’d write songs. I’d learn Taylor Swift songs on guitar or the piano, and just make up new melodies and make up new words and everything and I was so obsessed with Taylor Swift, Sheryl Crowe, Lauryn Hill. I saw these women being able to say whatever they wanted. Alanis Morissette, she was going crazy in her songwriting and people were singing along and celebrating that and I was like, I need to do that because my lashing out or fighting with my sister, I’m not being seen. I need to channel my emotions into another thing.

That also goes along with this idea of wanting and needing a space and celebrating a space where you can feel everything, even if it’s ugly.

Definitely, and making a space for other people. I just want people to feel comfortable. I just think it is such a thing that you shouldn’t be emotional, especially for women, but men too, men shouldn’t be emotional or it’s embarrassing to cry over a guy. I just think that you should never be embarrassed. You should always do what you want to do and feel how you want to feel.

What can you tell me about the album you’re working on right now?

It’s just songs that I wrote over the pandemic and after and they're all pretty much done. It’s coming out in spring next year. A big theme is this self-soothing thing that’s like, “You’re okay. Everything’s okay.” Convincing myself that I’m fine. I think that something I’m really, really focused on lately is finding peace and healing within myself rather than looking for other people to solve my problems. Just being able to solve issues myself and be enough for myself. This self-soothing is interesting because I always think if I’m freaking out or having a panic attack and you try to meditate, that would never work because you have to have this overall practice of meditation. I don’t even know why I bring it up because if I meditate, I’m like, “Oh there’s a dog outside!”

The self-soothing theme makes sense, especially because writing is an act of self soothing anyway.

That’s what I’ve been doing since I was young. A lot of times I feel like people wouldn’t listen to me because I was being emotional. People would write it off and so I found a safe space in writing and it’s so useful.