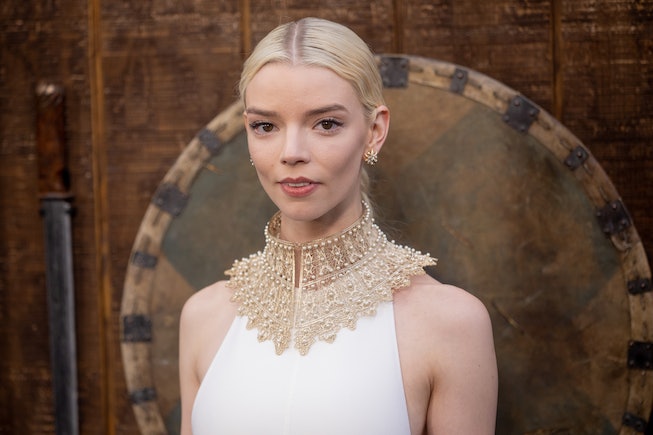 What the hell is going on?

Anya Taylor-Joy asks this question about halfway through the new trailer for The Menu, but the inquiry could just as easily serve as a thesis statement for the entire film. Directed by Succession veteran Mark Mylod and based on a script by late-night writers Seth Reiss and Will Tracy, the upcoming Searchlight Pictures release stars the Emmy-nominated Queen’s Gambit breakout as Margot, one-half of a couple who “travel to a coastal island to eat an exclusive restaurant where the chef has prepared a lavish menu, with some shocking surprises.”

But what could possibly be so “shocking” at an exclusive restaurant, you may ask.

Well, a lot, apparently. In addition to the $1,250-per-person meal price (“What are we eating, a Rolex?” Anya asks incredulously after hearing this information), a dinner at “Hawthorn” seems to also include, amongst other things: storytelling, mysterious games, weird revolving doors, paranoid chefs, food featuring meticulously drawn pictures of the guests currently eating it, “theater and stagecraft,” drowning angels, gunshots, chairs thrown at bulletproof windows, and what very clearly looks like some kind of late night witch-hunt, where employees are the predators and the unlucky diners are their prey. (And that’s just in the trailer.)

Of course, as the chef informs his guests, “This is what you’re paying for.”

Any chance to see Anya Taylor-Joy threateningly tell someone to “Get out of my way!” would be worth the price of admission, but The Menu has gone the extra mile in assembling its supporting cast as well. Emmy-nominated The Great scene-stealer Nicholas Hoult plays Taylor-Joy’s other half, Tyler, while Schindler’s List Oscar nominee Ralph Fiennes plays the maybe slightly over-obsessive chef Slowik. Hong Chau, Janet McTeer, Judith Light, Reed Birney, Paul Adelstein, Aimee Carrero, Arturo Castro, Mark St. Cyr, Rob Yang, and John Leguizamo round out the cast.

Check out the painstakingly-planned trailer below. The Menu hits theaters on November 18.