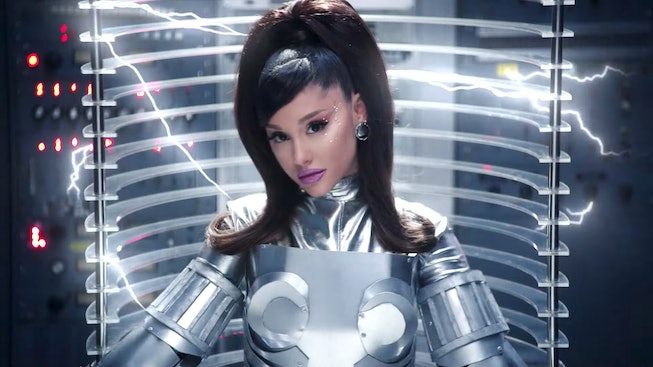 Ariana Grande has revealed the two special guests that will be joining her for the upcoming "34+35" remix, dropping on Friday at midnight. After initially teasing and asking her fans to guess the identities of the features on Instagram, Grande announced on Thursday that Megan Thee Stallion and Doja Cat, easily two of pop's biggest stars right now, will appear on the track.

Some especially clever fans had already suspected Megan Thee Stallion and Doja Cat as the features thanks to some sleuthing and selective searching on Apple Music. Nonetheless, Grande released the announcement alongside updated track art for the song which showed the three dressed in the Fembot and retro lingerie costumes from the music video. Assuming the remix will also come with a video, we're hoping this means we're getting a continuation of where the original Director X-shot visual left off.

"34+35" is from Ariana Grande's recent positions album, which was released back in November. The song — its title a reference to the infamous, numerically named sex position — became a fan-favorite after the album release, on account of its absurd subject matter and upbeat sound. (Plus, it's popular on TikTok.) "I just think it’s ridiculous and so funny and stupid," Grande said of the track in an interview. "It’s like absolutely absurd [...] We heard the strings that sounded so, like, Disney and orchestral and full and pure, and I was like ‘What is the dirtiest possible most opposing lyrics we could write to this?'"