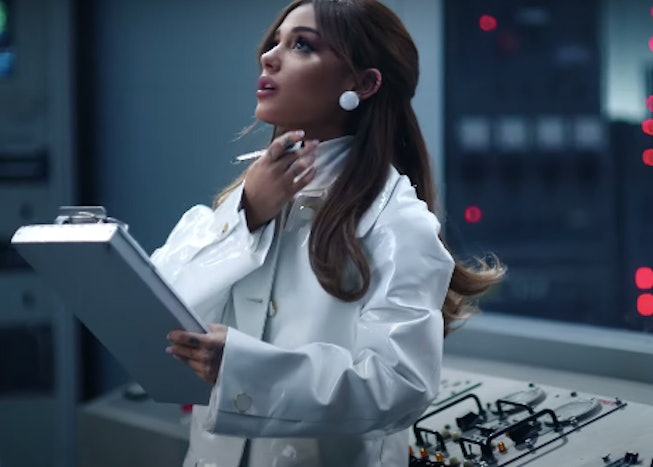 Two and a half weeks ago, Ariana Grande dropped positions, the singer's sixth album in seven years. Many critics praised the new record for its inventive take on "aRi&B" and, above all, for its forward-thinking sexuality. More than any other Ari album in the past, positions was a decidedly adult record tailor-made for the bedroom, and chief among its lascivious leanings was "34+35." A math problem described as a song title, the cheekily-named track was a subtle allusion to our world's most democratic sexual position. After quickly becoming one of the most popular tracks on the album, "34+35" was chosen as positions' second single (following the title track), and today, the mega popstar dropped its very fun music video.

But don't go thinking the former Nickelodeon star was going to give you, well, you know. Just as she did in the accompanying visual for "positions" (another song peppered with sexual innuendos), Grande takes the math pun in the title more literally for the video, casting herself as a scientist who runs around checking estimates on her clipboard, adjusting knobs on a high-tech dashboard, and consulting her similarly-dressed coworkers as she tries to make an alternate, robot version of herself come alive on the operating table. (Of course, this is Ariana Grande we're talking about, so naturally, this scientist walks around the lab in sky-high white vinyl boots with a matching ankle-length coat.)

An entertaining visual to match the addicting song, the video also features scenes of the Victorious star acting opposite herself (not everyone can do that), a plethora of polka dots (my choice for the best pattern of the season), Ariana's signature high ponytail (her "half-up, half-down," if you will), some easy-to-learn choreography (start filming your TikTok videos now), and a magical moment where Robot Ari turns Scientist Ari & Her Coworkers into a band of pastel-coated lingerie models (Victoria's Secret, eat your heart out).

Most importantly, though, the video was apparently just as fun to film as it is to watch. As the final credits roll, viewers are taken behind-the-scenes of the music video shoot. Honing in on the part when Ariana's manmade robot comes alive, the clip shows Director X coaching Ariana through her scene. "We're slowly zooming out...something's happening...it's standing...it's alive!" he exclaims, as we watch Ariana do her best to mimic the angular movements of a robot. Later, we can see her jumping around and laughing with her backup dancers as Director X coaches them all through the transformation scene. It's clear that Ariana & Co. were all having a good time on set. And at the end of the day, isn't that what's most important?