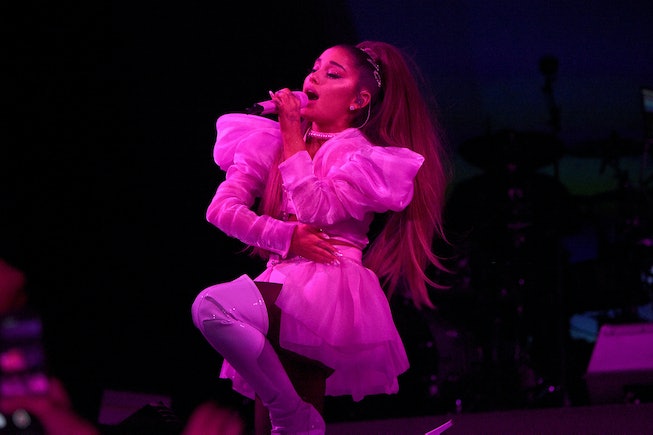 UPDATE: Ariana Grande announced excuse me, i love you, a Netflix documentary about her Sweetener tour. The film is set to release on December 21.

Ariana Grande has one of the most intentional social media presences among today's pop stars. Where Britney Spears presents delightful chaos, Grande strictly sticks to a color palette, angle, or a favorite emoji. She may not have the complete, calculated control of Beyoncé in terms of posting, but when Grande hints at something, she makes sure everyone is on the same page.

Take a recent post, for instance: three moody, black and white photos from her 2018 Sweetener tour. Is it simply classic nostalgia and yearning for days when "live music" and "stadium tours" were a thing? Sure, she definitely misses performing, but Grande also tagged streaming behemoth Netflix immediately after posting. But what does it all mean?

Thankfully, it doesn't take a genius IQ to decode that Grande and her ponytail are more likely than not teaming up with Netflix to drop a Sweetener tour documentary. Knowing Grande, she'll most likely sprinkle in some more cutesy clues, like lyrics, vocal runs, and cloud emojis, before making any major announcements.

And to all this I say: Good! We need beautifully shot concert footage of more entertaining times now more than ever. Plus, Grande's innate theatre kid antics will surely add a little — wait for it! — sweetener to these grim and dreary days.

NEXT UP
Culture
Phoebe Dynevor Will Not Return for Bridgerton Season 3
Culture
Netflix Is Seriously Cracking Down On Sharing Passwords
Culture
Succession Season 4 Trailer Explodes With Family Drama
Culture
The Biggest Revelations From The Price Of Glee Docuseries
Style + Culture, delivered straight to your inbox.