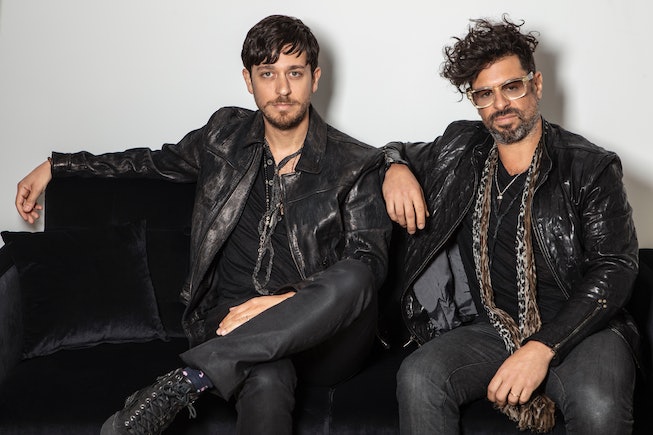 Any hardcore partier, raver, Burner, or Ibiza aficionado will know of Bedouin, the DJ duo made up of friends, musicians, and producers Tamer Malki and Rami Abousabe. Since the pair officially arrived on the scene in 2012, they’ve consistently dazzled crowds from Burning Man to Coachella to Ibiza with their hypnotic, world-traversing sets, which fuse delirious deep house with sonics from the Middle East. Their sound, which has been called desert house, is an ode of sorts to their cultural heritage; Malki is from Jordan and Abousabe, Egypt — though they joined forces in Brooklyn, NY, the city they called home right up until last year when they moved to Miami. (“More space, better weather,” reasons Malki.)

While the last two years did briefly dampen the duo’s jet-setting schedule for a few months, they’ve more or less accelerated back to full speed. Most recently they brought their mystical vibes to NYLON’s Art Basel Party in Miami — and it seems they’re only getting busier.

In addition to releasing their first proper album, Bedouin is also announcing a new residency at the legendary Ibiza club Pacha in 2022, their first since their 2018 stint at Heart. NYLON caught up with the duo to chat all about their upcoming plans, the craziest gig they played this year, and their evolving listening habits. Read it all, below.

Where am I talking to you from?

What spurred the decision?

You played NYLON's Art Basel Party. How did that night go?

Malki: It was a good vibe. Great setup. Great villa. It was really good.

When did you play your first show since things started opening up?

Abousabe: We never really fully stopped. I don't think… maybe there was a few months there. But yeah, I think it went quickly to like...

Getting back to normal?

Malki: Well, at least not public events, but in the beginning there were private events. Like everybody else we were stuck in New York during the heat of it. During like March, April, May. I would say June. We were not doing much.

When did you play your first big public event, party, rave or festival?

Did you feel like there was a difference in the crowd, or the kind of music people were vibing with?

Abousabe: Yeah. I think there's definitely an impact on how you approach musically, maybe during a pandemic, but in terms of the crowd, generally people were really excited to have any kind of human interaction, being locked up for so long. I think there was general excitement, but limited by the bureaucracy of whatever city or country you're in and their government and how they're handling it and things like that always.

Malki: We noticed that people are very excited to go out and party and dance.

What was the craziest gig you played in 2021?

Abousabe: Space Miami. That was kind of like going from zero to 100.

Malki: Miami was definitely one of the big, faster places to come back and bring back the dance floor and gatherings.

Over the last two years, do you both feel like your listening habits have evolved?

Abousabe: I think it's always evolving, your ear changes over time and things you might not have appreciated years ago all of a sudden become relevant because it becomes our main responsibility, full time job. Your library expands quite quickly.

I feel like I've explored almost everything that's out there. I think we're always looking to excite each other and ourselves and the crowd with surprising moments. Stylistically, we're an open book. We look for musical integrity.

Malki: During the downtime, I had a lot more time to explore different genres of music and get deeper into my music library and research a lot of eras and different worlds other than dance music or electronic music, which is always expanding. Expands your horizon as a music person.

You two recently started a record label, Human By Default. Tell me about that endeavor.

Malki: Human By Default is our record label that we established about a year and a half ago. And we sign and release younger artists from all over the world that kind of fit along the lines of what we like and what we do. So we're always pushing that music before it comes out and when it comes out. That's incorporated as part of our show.

Who are some of the artists you’re championing?

Malki: Nandu is one of the artists that we're pushing right now and we think he has a really big, bright future ahead of him. Collé, and Mike Steva from Australia who we just signed. And we have our own release coming out on our label, which is a collaboration with a Ukrainian folk band called the DakhaBrakha. We have a four track EP coming out with them. That's coming out in less than two months actually. So that's one of the things that we've also been including a lot in our sets.

Tamer, you recently posted a photo of you singing in a recording booth and remarked that you “never thought of yourself as a singer.”

Malki: Oh, we actually finished our album, our first album. So that was from the recording sessions from the album and we're both singing on it and we both wrote everything from scratch — it's all 100 percent original. That's actually my first time singing. I don't really consider myself a singer to be honest with you, but it happened as part of having something to say. If anything, I think Rami is a way better singer than I am.

Abousabe: Thank you. We've used our vocals in our music since day one. We just never really advertised the fact. So it's kind of coming full circle now with the album because it'll be more evidence that it's actually us.

Looking ahead, is there a venue, city, event that you both are most looking forward to in 2022?

Do you have any tips for people who’ll be going to Ibiza for the first time?

Abousabe: Yeah, stay hydrated. But I think Ibiza actually has something for everybody. And it's like the epicenter for electronic music. But within that big umbrella, there's super underground or super commercial or even like let's say burlesque style performances. They bring back a little more theatrical elements of the party that I think has been looked over.