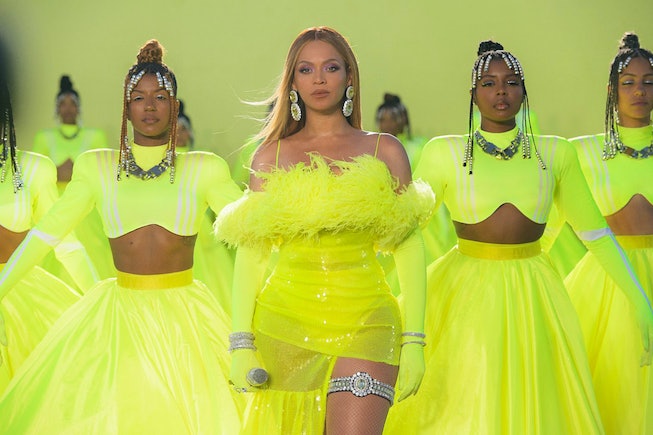 Beyoncé dropped her new song, “Break My Soul,” on the longest day of the year: the summer solstice. With the abundance of daylight now available to while away, there’s only one thing she wants us to do: quit our grinds, and start moving.

“Break My Soul” is the world’s first official taste of the prolific singer’s upcoming seventh album, Renaissance, a summer baby, expected for birth on July 29 via Parkwood Entertainment. Released at midnight on June 21, the lead single is effectively Beyoncé’s first solo release since 2016’s Lemonade — and a major stylistic pivot to a starkly different sound: dance music. With its jubilant The-Dream-crafted beat (heavily sampling Robin S.’s 1990 dance hit, “Show Me Love,”) and a second rowdy feature from Queen of bounce Big Freedia — “Break My Soul” offers a curious look into what’s been on the notoriously private star’s mind ever since. Like most of the world still reeling from the past two years, she’s been stressed out, strung up, and desperate for fun, judging from the lyrics. Now, she’s ready to dance.

Like another one of her superstar peers who released a dance album just this past weekend, Bey seems primed to use the sounds of the genre to usher in a suggestion of maximum relaxation. It is vying to be a summer hit after all. But embedded beneath the track’s dancefloor spirit lies another and much more urgent message, about work and our relationship to it. As if she’s been reading the room for the past two years, Bey knows the classic 9-5 is going rapidly out of vogue as The Great Resignation continues its toll and Gen Z has more or less declared themselves anti-work online. In 2014, she wondered why people were working “9 to 5 just to stay alive.” Now, she’s rejected the conceit completely. Beyoncé says it so it must be true: 2022 is the summer of no work.

From “Break My Soul””s very first verse, Beyoncé is clear about her position on hustle culture. “Now, I just fell in love, and I just quit my job/ I'm gonna find new drive, damn, they work me so damn hard/ Work by nine, then off past five/ And they work my nerves, that's why I cannot sleep at night.”

Not just stopping there, the crux of the track comes into focus on the song’s pre-chorus and hook. “Motivation/ I'm lookin' for a new foundation, yeah/ And I'm on that new vibration/ I'm buildin' my own foundation,” she sings before launching into the hook. “You won't break my soul/ You won't break my soul/ I'm tellin' evеrybody/ Everybody/ Everybody.” Bey’s not just content with quitting her job, she’s devoted to building something new in its place. It’s an active choice of divesting from what’s no longer serving you and reinvesting that energy into something more nourishing. Call it your own business, or something even more basic: happiness, or a me-first attitude.

The next verse of the song is Bey’s display of what life can be when you’ve reached this state of unattachment: releasing her hair, sleeping “real good at night,” and partying with her clique in her home while “tryin’ to smoke with the yak (cognac) in your mouth.” And on the third verse, Bey lays out the keys to getting to this place: “If you don't seek it, you won't see it/ That, we all know/ If you don't think it, you won't be it/ That love ain't yours.” She envisions a different life that’s possible: “You can have the stress and not take less.” By the end of “Break My Soul,” Beyoncé’s fully committed to this new future. “I'm takin' my new salvation/ And I'ma build my own foundation,” she sings on the outro.

If there was anyone more equipped to influence a generation of people to re-evaluate the position of work, it’s Beyoncé. A virgo through and through, she’s the master of hard-work and dedication, of seeing through the pain to greet the fruit of her labors. But now she’s turned her back on it, and already, the message is hitting home online. “Is she telling us to quit our jobs?? Because I will, Beyoncé, I will!” wrote one fan on Twitter.

But of course, one should always exercise a healthy amount of skepticism when a world’s multi-billionaire seemingly distills the formula to happiness in a tight four-minute song. “Quitting your job” is a no-brainer when you’ve got a stockpile of cash in the bank, other concurrent businesses going, and an equally rich husband helping out from the next room. But there’s still something about “Break My Soul”’s ideology that has room to resonate with all of us, if only its remembering how Beyoncé slowly removed herself from the spotlight over the years, began only revealing parts of her life on her own terms, and more or less embodied the “divest from one sector of to invest in another” message of the song. It doesn’t have to be a grand gesture of resignation, and can just be small nudges in your day-to-day toward meeting your own needs and whims more indulgently. It’s a mindset Beyoncé herself motioned toward in a previous interview, inadvertently referencing the music she would later release without anybody knowing at the time.

“With all the isolation and injustice over the past year, I think we are all ready to escape, travel, love, and laugh again,” she told Harper’s Bazaar. “I feel a renaissance emerging, and I want to be part of nurturing that escape in any way possible.” At the end of the day, you don’t have to not have a job to be anti-work. You just have to live it.