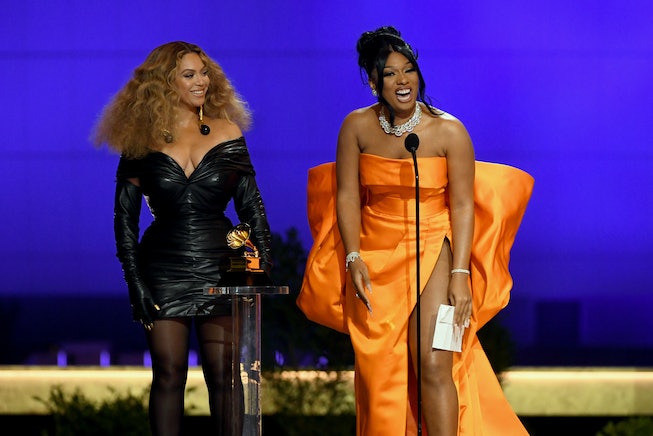 In a rare live appearance, Beyoncé joined Megan Thee Stallion on stage to accept the Best Rap Song Grammy award for their “Savage” remix. The elusive superstar was wearing a short leather dress and was captured by the cameras sneaking into the award show half-way through with her husband, Jay Z. Though we didn’t get a Beyoncé moment during Megan’s live performance of their now award-winning song, it turns out she came out in anticipation of Megan’s win.

“If you know me, you have to know, ever since I was little, I was like, ‘You know what, one day I’m going to be like the rap Beyoncé’,” Megan Thee Stallion said in her acceptance speech, laughing. “Thank you Beyonce for your encouraging words all the time. Thank you, Jay for putting me on Roc Nation. My life has changed ever since I became a part [of it].”

Though Beyoncé gave Megan most of the speech time, she did cut in at the end to thank her fellow Houstonian directly. “I just want to take a moment to give you my love, Megan. I have so much respect for you. I’m honored that you asked me to be a part of this song,” Beyoncé said.

The 2020 hit became Megan Thee Stallion’s first No. 1 single, when it topped Billboard’s Hot 100 chart two weeks after its release.