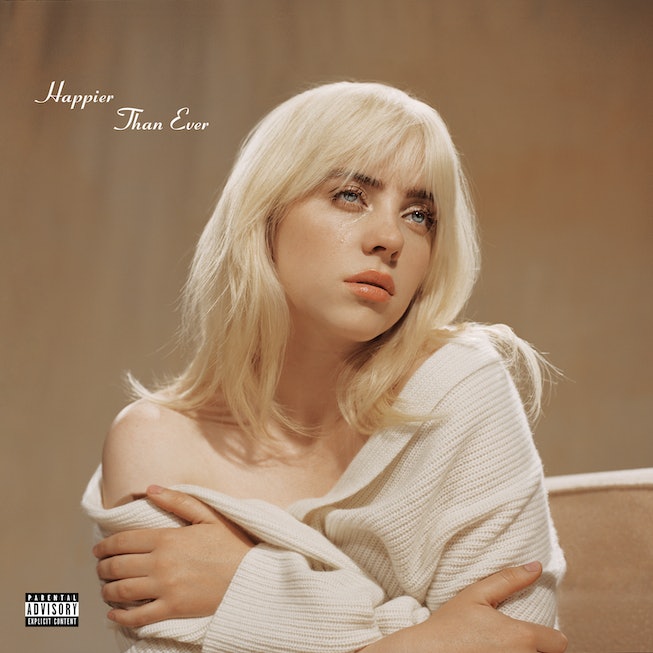 Billie Eilish’s sophomore album, Happier Than Ever, was released on July 30, and has already been embraced as the young pop star’s most unsparingly honest, and sonically diverse yet — a genuine feat considering her claim to fame was gloomy confessionals about self-harm, depression, and nightmares set against a spare musical background that altered the pop landscape as we knew it.

On her second studio album, the 19-year-old star manages to outdo herself on all fronts, weaving together a 16-track record that’s no longer concerned with imaginary monsters, but real life ones lurking around every corner: the stalkers prowling outside her door, abusers taking advantage of young girls, the nondisclosure agreements strangulating every potential relationship, and the weight of a million eyes watching your every move. Fame has taken a toll on Eilish, resulting in a new worn, wearied outlook from the still-teenaged star. (“Things I once enjoyed just keep me employed now,” she sighs on the opening track “Getting Older.”)

Yet the song that fans and critics have latched on to as a definitive standout is one of the earliest she wrote, before Happier Than Ever was even a concept. There’s a clip of her softly singing the song, which will come to be the album’s title, in the documentary Billie Eilish: The World’s A Little Blurry, with her brother, Finneas, harmonizing and accompanying her on guitar. It’s 2019, and she’s touring her debut album for the first time, holed up in a hotel room somewhere in the U.S. The song, “Happier Than Ever,” still bears its former title “Away From You.”

Right before the clip, the documentary films Eilish having a somewhat strained phone call with her boyfriend at the time, rapper 7:AMP, whom she affectionately calls Q (she asks him to please call her back, but he’s already hung up the phone). We’re led to believe that the lyrics she’s singing in the next scene may be about their relationship.

If so, it was a doomed one. “When I'm away from you, I'm happier than ever/ Wish I could explain it better/ I wish it wasn't true,” goes the title track’s blue opening lines which she croons in a melted, whispered tone, emulating a bygone torch song. The song doesn’t get any sunnier from there as she continues to list grievances from their relationship that build up in a fiery pile: “You call me again, drunk in your Benz/ Drivin' home under the influence/ You scared me to death, but I'm wastin' my breath,” she chants. By now, the song has mutated into a prickly rock opera that reaches a startling apex as she yells, “You made me hate this city!”

“Happier Than Ever” is perhaps the most direct Eilish has been about her relationship with the rapper, not even bothering to veil any of its details in vagueness. Instead, her anger and frustration spews forth in targeted, specific streams: “I could talk about every time that you showed up on time/ But I'd have an empty line 'cause you never did,” she huffs near its end.

Incidentally, we witness several instances of Eilish calling and waiting for Q in The World’s A Little Blurry, one of them being on the day of her Coachella debut. “I wanted you to be here, dammit,” she sadly laughs into her phone at one point while scooting around an empty tennis court. Q is on the other end of the line. “My ass was alone the whole day. It’s okay,” she eventually consoles.

In the documentary, Eilish described “Happier Than Ever” as being about “nothing even specific that they did. You’re just not happy being with them. You can’t even explain it. I can’t even explain.” Since its release, she’s added that the track was one of the most therapeutic songs she’s ever written or recorded.

“‘Cause I just screamed my lungs out and could barely talk afterwards, which was very satisfying to me somehow,” she told Spotify. “I had wanted to get those screams out for a very long time, and it was very nice to.”

Eilish hasn’t elaborated on her relationship with Q since, and given her now very justified wariness to share too much about her inner life with the world, she likely won’t again. (Q responded to the documentary with his own statement in which he said, “There's always two sides to a situation,” and explained that at the time he was coping with the death of his brother.) All we can do is take her at her word — that now, with distance, she’s feeling happier than ever.

Happier Than Ever is out now.