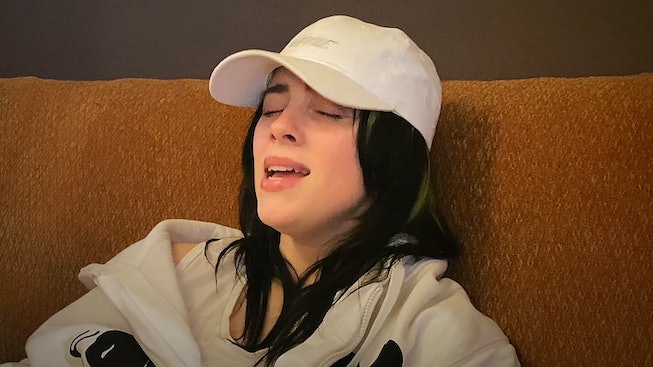 If anyone ever doubted just how hard of a Belieber Billie Eilish once was, it turns out she once stanned him so much it nearly required medical intervention. On the latest episode of me & dad radio, Maggie Eilish, her mom, revealed that they almost sent Billie to therapy when she was younger because she loved Justin Bieber so much it brought her to tears, literally.

Maggie was invited on the show as the guest of honor to share the songs of Billie's childhood, which included tracks from Rob Dickinson, Melody Gardot, and, of course, Justin Bieber. Billie's childhood obsession of Bieber is well documented — just look at the cover art to his remix of "bad guy" — and in the episode Maggie explained that Billie would often burst into tears just from watching the music video for his song "As Long As You Love Me."

"Driving to the dance studio with Billie, playing this song, sobbing. And then driving back and sobbing," Maggie said. "It was either Marina and the Diamonds or this. Sobbing [...] Well it was all of Justin Bieber['s songs]. This is just what we picked for this show."

Apparently her obsession was so intense that Maggie, bless her heart, explained that she was so concerned, "we did consider taking you to therapy because you were in so much pain over Justin Bieber."

As hilarious as this is, it turns out Billie had a tendency for waterworks as a child. "There was a period where I cried every single day of my life, when I was like 13, 14, 15," Billie said on the show. "Every single day I cried. And 17, 18 I cried barely at all. I’m proud to say I barely cry anymore and it's one thing I’ve overcome. This is a big deal. Not that it’s wrong to cry, but it’s a good thing I feel happier in my life and I don’t want to cry anymore."

Elsewhere in the episode, Billie talks about the fan reception her emotional song "listen before i go" has received. Though she was worried that the dark theme would trigger her audience, she's relieved to hear that her fans see it as a source of comfort. "Hearing someone going through the same thing you're going through doesn't make you feel worse about yourself," she said. "It makes you feel a little better." So for everyone else who cried because of Justin Bieber, you're not alone!

Hear the full segment of Billie and Maggie discussing the Biebs on Apple Music.