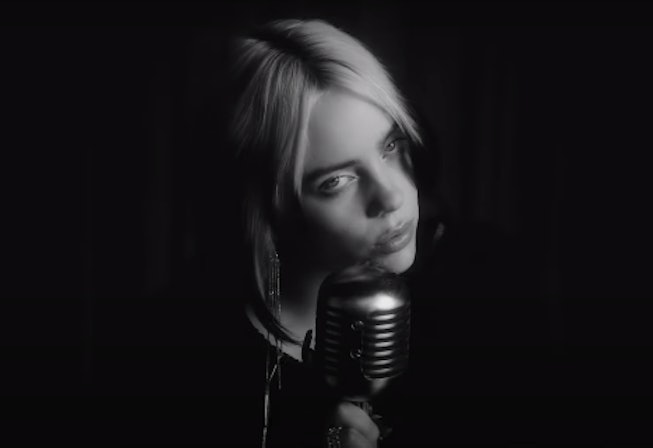 Billie Eilish's sweeping and melancholic James Bond theme song "No Time To Die" finally has an accompanying video. Director Daniel Kleinman, who has designed every title sequence for the Bond series since 1995, captures the song's orchestral gloom with black and white footage of Eilish singing in front of a vintage microphone, spliced in with high-octane action scenes from the forthcoming film. Eilish's delicate voice adds a gentle touch to 007-core shots like exploding ships, motorcycles that defy the laws of physics, and trigger-happy femme fatales.

Eilish penned "No Time To Die" with her creative partner and big brother Finneas, for whom the prospect of working on a Bond theme song was a longtime dream. "You know what's funny about it, like two years ago, we were like, wouldn't it be crazy to make a song for the Bond movies, and, like, wouldn't that be dope?" said Eilish, speaking to Apple Music's Zane Lowe. "And so, kind of for two years-ish, we've been subconsciously trying to… in our own way. And, like, we've written songs that have never come out that are, like, oh, this sounds like Bond, like, this would be dope, like, it would never happen, whatever. And then this offer came up and we were like, 'Ahhhh!'"

No Time To Die lands on November 11 after being pushed back from its original April release date.