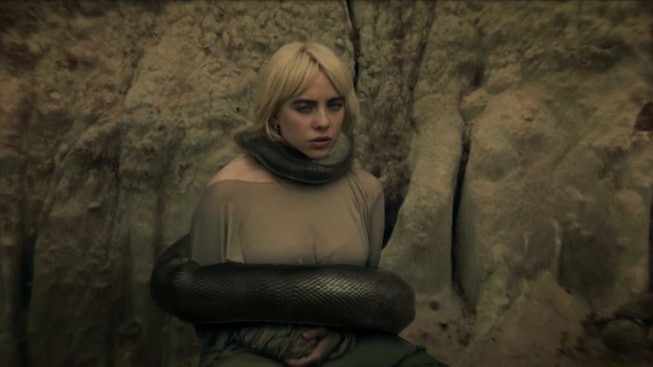 Billie Eilish’s new era is here. After several rounds of teasers, a bombshell hair makeover, and surprise billboards popping up around the country announcing her forthcoming sophomore album, Happier Than Ever, the now-blonde megastar has finally unleashed the project’s first single, “Your Power.”

Sonically, the song is a major pivot for the young star, trading the spare and bass-heavy soundscape of her debut album for an acoustic, softly folk sound. The song grapples with a timely topic: the abuse that can arise from an unbalanced power dynamic. On the track, she seemingly recounts a situation in which an older person took advantage of a younger girl. “She said you were a hero, you played the part/ But you ruined her in a year, don't act like it was hard,” Eilish delicately sings on the first verse.

In its accompanying video, directed by Eilish and shot in California’s Simi Valley, she sits alone on the edge of a cliff as an 80 pound anaconda slowly wraps its body around her torso and neck.

“This is one of my favorite songs i’ve ever written,” Eilish wrote of the song on Instagram. “i feel very vulnerable putting this one out because i hold it so close to my heart. this is about many different situations that we’ve all either witnessed or experienced. i hope this can inspire change. try not to abuse your power.”

Happier Than Ever will be out this summer on June 30, 2021. It’s the long-awaited follow-up to the star’s Grammy-winning debut record WHEN WE ALL FALL ASLEEP, WHERE DO WE GO?, released back in 2019.

In an Instagram post formally announcing the project, Eilish said that the project is her favorite thing she’s ever created. “i am so excited and nervous and EAGER for you to hear it,” she wrote. “[I] can’t even tell you. i’ve never felt so much love for a project than i do for this one. hope you feel what i feel.”

Though there aren’t too many details around the themes of the record yet, she did reveal in a February interview with Stephen Colbert that the project was written during the pandemic. Judging by its title, though, it likely won’t be addressing COVID-19; FINNEAS, who worked with Eilish on this album again, confirmed as much to Billboard, saying, “Billie’s album, and my album, they won’t be a bummer COVID record.”