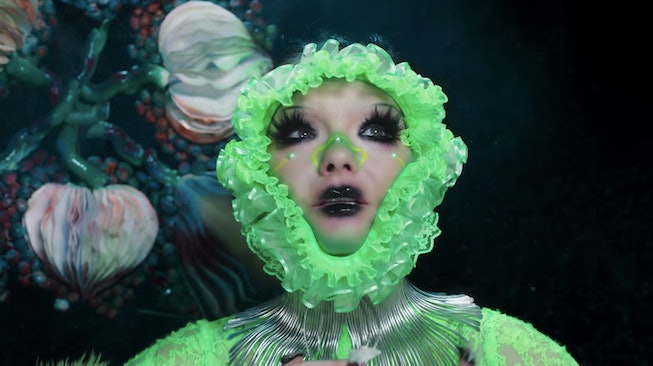 To fully understand Björk’s music, one can’t overlook her music videos. Over her three-decade career, the Icelandic iconoclast has become a master of the medium, spinning stunning visual stories and universes that aren’t just an accompaniment to the music, but integral to it. They often bring a depth that pulls the listener one layer closer, an effect that lies at the core of Bjork’s music video philosophy: “I have always aimed for the music video to be equal to the song: the 1+1 is 3 thing,” she said once in an interview. “Not that it works every time, but you have to aim for it.”

Since her 1993 debut, Björk has aimed ambitiously high, dancing with cats, getting sensual with hard-boiled eggs, integrating her own private sex tapes, and constructing otherworldly ecosystems in her videos. As she now prepares for her latest album, Fossora, she continues to stretch our ideas of how music videos should be utilized. See how Bjork’s visual journey has progressed over the years by tracing its evolution, below.

Half stage production, half stop-motion short, Björk’s “Human Behaviour” video follows the strange, loose storyline of Björk in the woods being chased by a giant mouse and its hunter. As her debut music video, it foreshadowed decades of visual kookiness to come, and a longtime creative partnership with its director, Michael Gondry.

Perhaps the simplest music video in Björk’s oeuvre, the black-and-white visual for “Big Time Sensuality” is also, in some regards, the most raw video we have from the artist. Filmed on a moving vehicle careening down one of NYC’s avenues, the video shows Björk dancing, laughing, and performing on the back of the truck, as passersby look on curiously, exuding a burst of infectious and genuine-feeling euphoria.

Directed by Spike Jonze, “It’s Oh So Quiet” is among the most recognized videos of Björk’s catalog. Based off of The Umbrellas of Cherbourg, it finds Björk singing and moving in slow-motion during its verses, and breaking out into dance and song during the chorus. As her and Jonze’s take on a musical scene, it’s playful and inventive, with the right dose of charismatic chaos — and later took home the award for Best Choreography at the 1996 VMAs.

Before Björk got avant garde, she was already playing heavily with surreal storytelling. The best example is her twisted video for 1997’s “Bachelorette,” once again directed by Michael Gondry, which follows the singer as she discovers a book that begins to self-write the events of her life. After selling the book to a publisher and having it turned into a successful stage adaptation, she and the publisher have a falling out, causing the book to revert its magic, and eventually return to the ground where she originally found it. One could consider it a contemplation on artist identity, creative inspiration, and the commercialization of art — or take it at face value: another great and weird slice from Björk’s imagination.

Before iRobot and Ex-Machina, there was Bjork’s “All Is Full of Love,” a tender and disquieting video about two robots who fall in love. Directed by Chris Cunningham, it was also a feat of technical skill for its time, blurring the lines between reality and CGI.

Originally banned by MTV in the U.S., Bjork’s sensual and abstract video for “Pagan Poetry” gains deeper meaning once you know that the highly stylized and digitally rendered sex acts which open the first half of the video came from the singer’s own personal footage. Directed by Nick Knight, the video is about “a woman preparing herself for marriage and for her lover,” and features Bjork in a stunning boob-baring Alexander McQueen gown in the second half — the start of her and high fashion’s love affair.

Not many of Björk’s videos are straightforwardly funny, but “Triumph of a Heart” is the exception. In this nutty visual, Björk is unhappily married to her cat husband, and leaves him to go out for a night of partying and mayhem. Later, when the sun rises and she’s recovering from the night’s wounds, her cat husband pulls up with his car and takes her home. They later reconcile by dancing together in the living room, making for an absurd, but admittedly sweet, ending.

For her album Volta, Björk continued to experiment with new tech for her music videos. One of the most innovative came from directors Isaiah Saxon & Sean Hellfritsch who used stereoscopic 3D to weave a stunning and mystical story about Björk, a herd of yaks, and elemental super-beings. The visual was awarded Video of the Year at the 2008 U.K. Music Video awards, and continues to show Björk’s embrace of the new.

Björk’s otherworldly video for “Mutual Core” could be regarded as the prototype for the sort of avant-garde visuals that would define her later albums Utopia and Fossora. Directed by Andrew Thomas Huang — the first of a long streak of collaborations between the two — it finds the artist costumed as a sea witch, as she manipulates the sand and Earth around her. She’s later joined by floating formless sea entities, creating her visual representation of a non-Earth universe. If it feels like it was meant to live inside a museum, you’d be right; commissioned and premiered at the Museum of Contemporary Art in Los Angeles, it’s the first of many music videos Björk created in collaboration with museums around the country.

Another Andrew Thomas Huang collaboration and museum commission — this time by the Museum of Modern Art — “Black Lake” is considered one of Björk’s biggest visual masterpieces. Clocking in at 10 minutes long, it includes two different versions of the video, though generally tells the story of Björk walking amongst the black cliffs of Iceland experiencing monumental feelings of loss, devastation, and ultimately, release.

At this stage of her career, Björk’s music videos are highly produced and largely sponsored affairs. But with 2017’s “Mouth Mantra,” we see a brief return to weirder Björk. Directed by Jesse Kanda, the majority of the video takes place inside Björk’s mouth, zooming around on her fleshy tongue, gums, and teeth, which appear terrifying at this angle. At the end, we’re spit back out and get to watch the singer thrash in a ghostly white gown.

With her Utopia era, Björk begins her journey distilling abstract concepts into tangible universes. “The Gate” is the first stop on her vision of what a utopia — sanctuary, eden — looks like. Directed again by Andrew Thomas Huang, Björk, this time dressed in an ornate Gucci getup, inhabits a dazzling world filled with flying alien entities. She dances in a kaleidoscopic gown and exchanges energy with what looks to be a robotic butterfly; it feels like a peak for the musician’s world-building super-power.

Björk has trained her microscope back to the Earth for her latest album Fossora, exploring themes of groundedness and stability. Questions around communication are also on the table, and she translates this by diving headfirst into mushroom and fungi imagery for her “Atopos” video, directed by Viðar Logi. In it, she’s a moss-covered being partying amid psychedelic mushrooms at a forest rave, complete with a tricked out woodwind section. It’s one of her weirdest and most freeing videos yet; at this point, Björk is answering to no one but her own creative whims.