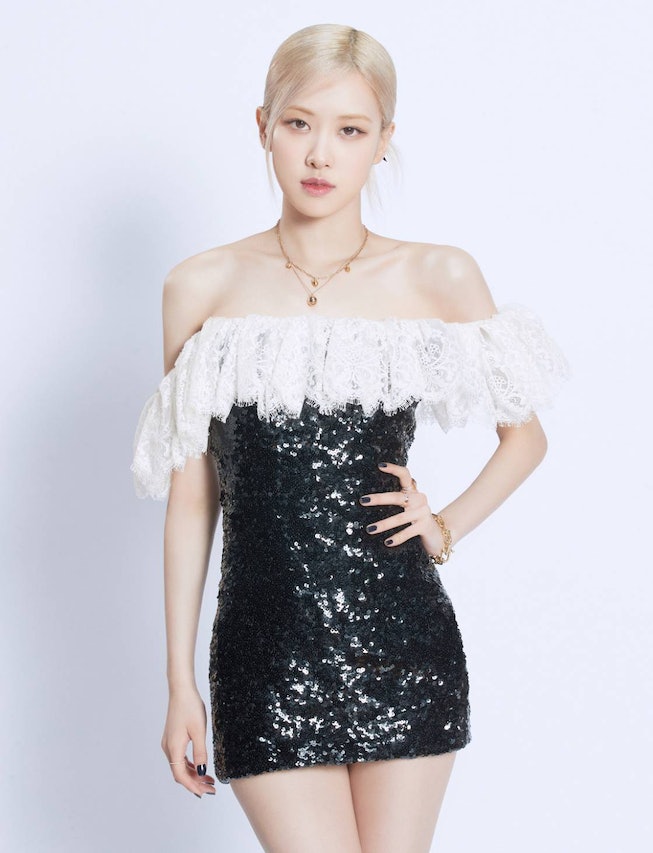 BLACKPINK’s Rosé is used to defying expectations. As one-fourth of the record-breaking girl group, she's never had to do it alone, until now. With the release of her debut solo project, R, an album two years in the making, the 24-year-old singer is finally (re)introducing herself — as Rosé, a global superstar, and as Rosie, a young woman with her head in the clouds on new lead single, "On The Ground."

"This is my first introduction as a solo artist, so I wanted to put my most honest self into the album," Rosé said during a global press conference streaming live from Seoul on Thursday, March 11. "As I prepared for the album, I actually got to take a look back on myself quite a lot. I learned that I'm a person who heals through music, and I learn a lot through music."

The private virtual event kicked off just several hours before the anticipated premiere of her lead single. Rosé opened up about her emerging artistry, detailing her creative process and the more personal themes of the album, which racked up 400,000 preorders in only four days — a new record for women soloists in South Korea.

Fans received their first look into Rose’s solo mindset back in 2020’s BLACKPINK: Light Up the Sky, a Netflix documentary that charts the Korean girl group's meteoric rise in the industry. There's a scene in which Rosé has a jam session in the middle of the night. She's seated in a dimly lit rehearsal room while strumming her guitar and singing a Korean ballad. She calls it her stress relief. "Everything makes sense when I'm doing this," she says, earnestly. "Sometimes I miss my trainee days because we were surrounded by music all the time, but these days we’ve got a lot of work, so I have to make time for this."

It's easy to see now that music is what keeps Rosé grounded. As she explained during the press conference, her passion for music and storytelling is what truly fulfills her. While voicing her opinions used to be something she struggled with, she learned to take creative control through this album-making process. She took part in label meetings, co-wrote lyrics, and gave input on the album design — from the big picture decisions to all the "little details," she said. It was also her decision to record both "On The Ground" and its moodier, rock-leaning B-side "Gone," in English.

"To make [the songs] more complete and perfect, I thought really hard about what would be the most suitable language," she explained. "I felt that in this case, with these songs, English would go best. Honestly, I was slightly worried that my fans may not like it, so that's why I really did a lot of hard thinking. But it's all about finishing the job and putting together a complete, well-done song. I wanted to give that as a gift to my fans. I felt that was more important."

"On The Ground," is Rose’s introspective look at pop stardom. With wispy, melodic verses and a pop-EDM hook, the track finds the Korean-Australian performer making peace with the fact that whatever goes up must come down. "I worked my whole life just to get high," she sings on the song, "just to realize everything I need is on the ground."

She is also using R to experiment vocally. "Since this is my solo debut, I wanted to try out different sounds and different vocal techniques," she said. "I tried some new things. I think you'll get to see a new musical side of me."

As the main vocalist of BLACKPINK, Rosé's distinct tone is often best used on the group's soaring bridges. Her voice is deeply emotive, and it elevates the drama of every song, like 2017's "As If It's Your Last." The track is visually referenced in the music video for "On The Ground," which she also shared on Thursday.

In it, Rosé writes her name in the mirror with lipstick — a meaningful callback to her career origins. There are other hints to her past in the video: The marquee of a theatre displays the name of the Australian film Last Cab to Darwin and its cast, a wink to Rosie's Aussie roots, and in a particularly sweet moment, Rosé stands over her younger self while she's playing the piano.

"It comes across with a different meaning each time," she said of the video's many meanings. Some callbacks, she says, are personal, while others are completely made up. "I believe that a song is also a form of storytelling, so when I was recording my songs, I try to create a character in my head," she explained. "When we were shooting the music video, I tried to think of the character that this song reminded me of, and to portray the emotions of that character."

Right now, Rosé is somewhere between "very, very nervous" and "very excited." Her group mates Jisoo, Jennie, and Lisa are already her biggest cheerleaders, she said. Jennie, who made her solo debut in 2018, showered her with gifts for her puppy, Hank, while Lisa gave her seal of approval on the flashy music video. And Jisoo, the oldest member, gave her some lasting advice.

"This album is about me," she affirmed during the press conference. “It's the first step in my solo career. As I prepared for this album, I learned a lot. I was comforted. I could relate to a lot of things. I hope that the people who listen to my songs will be able to identify as well, and I hope they will be comforted."