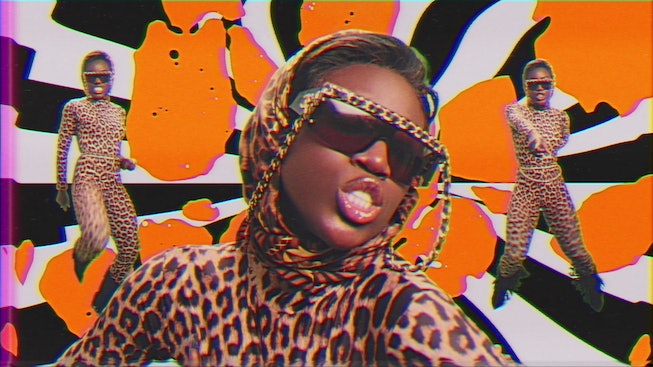 The perhaps most definitive thing about Bree Runway is that she cannot be neatly defined. The Hackney-born artist resists being categorized into any one box, and the resistance is warranted — Runway's sound and aesthetic are fully the embodiment of a creative mind nurtured by a comprehensive musical background and growing up online. Her recent track, "Apeshit," which received co-signs from fellow boundary-breakers like Missy Elliott and Doja Cat, opens with searing, clamorous electric guitar riffs before cascading into a dance track anchored by funky synths, throwback beats and Runway's raps (she also sings the hook).

It's no surprise then that Runway has been using quarantine to keep her creative instincts nimble, leaning on her DIY roots to create a song and video entirely from home. Produced by filmmaker and director Gemma Yin, the '80s-inspired video featuring a sensory overload of color and technicolor graphics sees Runway and collaborator Yung Baby Tate popping out of TV screens as they deliver bars from the perspective of nostalgic sitcom alter egos.

"I was binge-watching back to back shows of Martin and Fresh Prince, and I love the music in those shows. I thought to myself, 'if I was a songwriter during that time and was asked to contribute to a soundtrack for one of those shows, what would that be?" Runway tells NYLON. "I felt really inspired and decided to play around with some '80s sounds. I fell in love with the lead chords and stepped straight into character, thus my character Keisha was born. It was a no-brainer to bring Tate on board, this song tells a story; it's full of character, drama, unity, it's colorful and fun, everything we both are! An ultimate bad bitches link up!"

Watch Runway and Tate have fun as Keisha and Felicia below:

NEXT UP
Entertainment
Ireland Basinger Baldwin Dodges Paparazzi In St. Lucia's "Gimme The Night"
Entertainment
Relive ‘00s New York With Yeah Yeah Yeahs, The Strokes In ‘Meet Me In The Bathroom’ Trailer
Entertainment
Aya Nakamura On Preparing Her Fortnite Soundwave Series Performance
Entertainment
Seulgi Finds Her Own Lane With '28 Reasons'