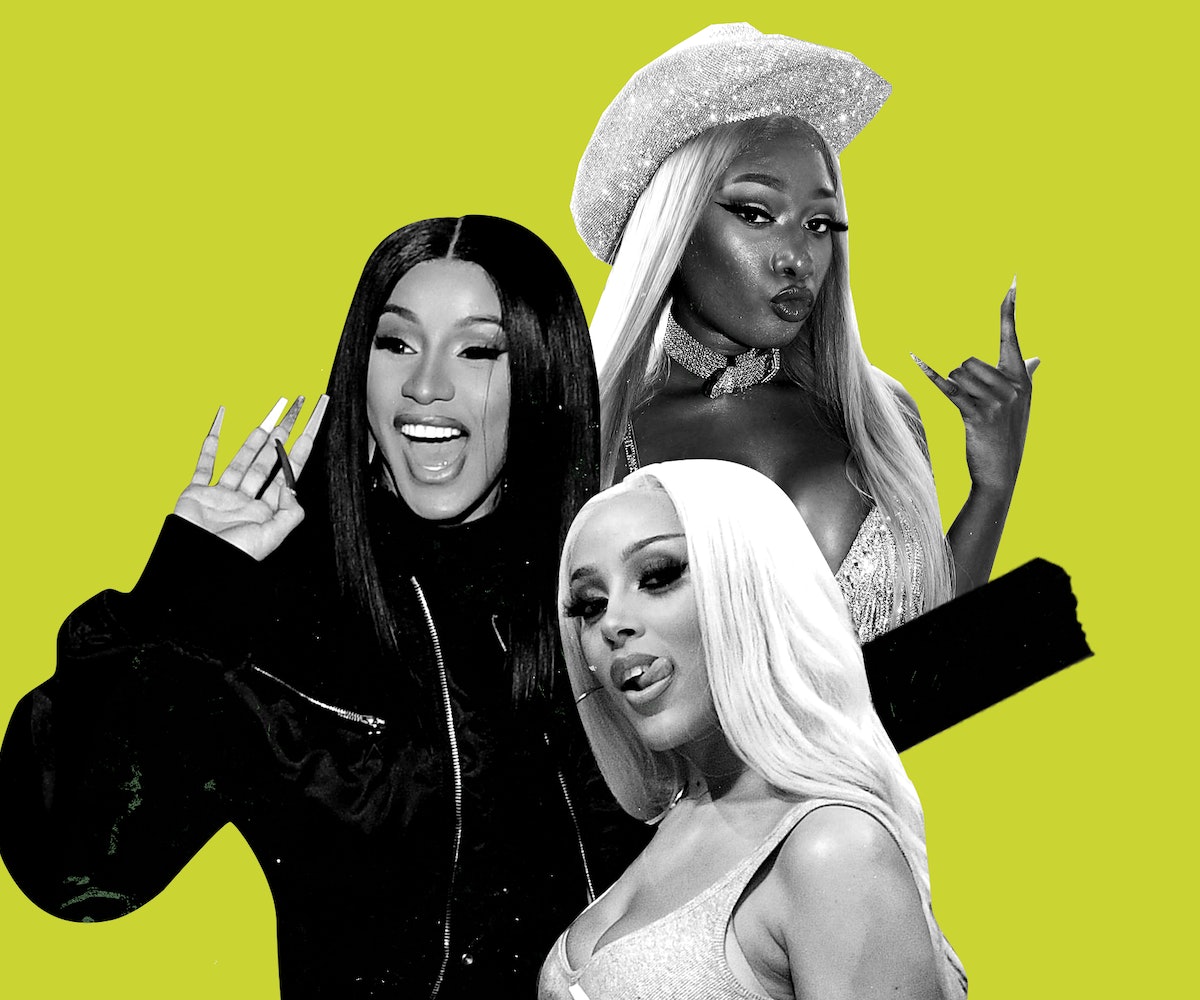 While music fans eagerly wait for live concerts to return — tentatively by fall 2021 — women in rap are using the internet as their primary platform in ways tailored to fit their innovative aesthetics. Though numerous women-led tours and festival spotlights have been pushed back due to the novel coronavirus pandemic, female rappers have flourished online. Thanks to their social media ingenuity, they’ve quickly emerged as the queens of quarantine content.

Rather than solely using social platforms for traditional music releases, these women prove that their liveliness isn’t just reserved for performances. Since quarantine began, Doja Cat hopped on TikTok to cover “The Box” in Hamlet-style spoken word, wearing armor chainmail; Megan Thee Stallion raved solo to house music in her kitchen; and Cardi B joined former presidential candidate Bernie Sanders for an Instagram Live chat, during which they compared manicures and discussed why young people should vote for Joe Biden. (Like the rest of us, Cardi also marathon-watched the blissfully surreal Tiger King — not only discussing it in real-time with fans online, but also joking about starting a GoFundMe to free the documentary's star, Joe Exotic.)

The creativity of female rappers often transcends the stage, but never has this been more evident than in the midst of lockdown. Whereas other artists might rely on music or merchandise alone to connect with fans, women in rap have been choosing from their kaleidoscope of talents to create and provide entertainment. Being able to think on one’s feet, inject even serious moments with humor, and ham it up in a skit are all par for the course for rappers, and women are no exception.

Just a couple of weeks into widespread social distancing, Tierra Whack translated the general ennui of the quarantine experience into a hilarious pop-punk track “Stuck" — a delightful surprise for fans trapped inside their homes. Whack is just one of many female rappers whose animated personality nearly precedes her music. Though Whack’s 2018 debut, Whack World, was notable for bubbly wordplay, it was her accompanying oddball short film that seized new fans’ attention.

Atlanta rapper Yung Baby Tate believes that the connection with fans during quarantine should remain authentic and spontaneous. “I’m really interactive with my fans, so this quarantine doesn’t have me acting any different or pulling stunts for views. I honestly think that’s corny and I prefer to stay genuine,” Tate tells NYLON. “I’m still going live [on Instagram] here and there, whether I’m adding some of my fans and doing talent shows, playing the occasional snippet, answering questions, or just talking.”

However, promotional strategies have still maintained in spite of the pandemic. Though live concerts have been postponed, performances by female rappers continue to be streamed on Instagram Live, and Gen-Z favorite TikTok keeps fans physically active with a near-constant rollout of dance challenges tied to rappers’ hits. In March, Megan Thee Stallion’s Suga EP single “Savage” went viral with the #SavageChallenge, originally created by dancer Keara “Keke” Wilson and then replicated by celebrities and fans alike. Doja Cat’s “Say So” also received a streaming boost after TikToker Hayley Sharpe created a popular dance to the song. Sharpe even made a cameo in the official “Say So” music video, after Doja Cat fans swarmed TikTok to cover their own versions of the dance.

“TikTok is a great tool for discovery, whether that is an A&R or manager discovering new talent or people discovering new acts. It is hard to be prepared for viral moments, but I would recommend [for] artists who are engineering campaigns around TikTok — make sure you are ready for immediate attention,” says Quinn Goydish, Yung Baby Tate’s manager.

“Everything has turned digital, so the challenge has been finding new and creative ways to market our artists. I don’t think any one company or team has mastered this, but I do think it is [their] duty to be ahead of the curve and be ready for situations like [the pandemic],” adds Toniesha Renee, digital and influencer marketer at RCA Records. “Our job is to always be up on the next trends.”

While the visceral experience of a live show can’t be replaced, the online habits of female rappers have still been interactive, especially when it comes to giving back. Soon after the coronavirus outbreak hit the United States, Megan Thee Stallion collaborated with CashApp to launch #HottiesAtHome — supporting fans who are in a financial crisis during the pandemic with cash. After calling attention to the coronavirus on Instagram, Cardi B followed suit by partnering with Fashion Nova to give away $1,000 every hour until May 20.

With female rappers attuned to keeping their fans’ attention, numerous acts have used their online influence to further build engagement during quarantine. Influenced by music festival style, Saweetie released her first makeup collaboration with Morphe in late March. Though Coachella was postponed to October, Saweetie has still capitalized off of “festival look” tutorials, and posted a cheeky Bella Noche skit. Saweetie reigns most through her glamorous appeal, collaborating with PrettyLittleThing with a pop-up line after 2019 single “My Type” peaked at #21 on the Billboard Hot 100 — and was recently certified 2x platinum. Now teasing new project Pretty Bitch Music, as an ever-evolving businesswomen, Saweetie hasn’t shied away from making boss moves during quarantine, and proves that there’s beauty in the hustle.

After partaking in a humorous Instagram Live session with Doja Cat, Rico Nasty didn’t let quarantine stop her from dropping her new music video for “Popstar.” Nasty has constantly grown traction for her music through the internet, and she continues to promote her work by partnering with Skullcandy and hosting merch giveaways on Instagram.

Taking a step back from music since the release of her 2018 sophomore album, Room 25, Noname has put her nationwide book club on hiatus, but has still encouraged literacy through new zine Out of Print. Noname Book Club has even launched their first prison chapter, as the rapper continually advocates support of indie bookstores without relying on Amazon. It’s a revolutionary act that sets Noname apart from the rap crowd, as Black-owned book clubs and bookstores have been a hub for collectives to politically organize and protest.

As for the in-person aspect of female rap, there are still acts who miss the intimacy of live shows and content-creating. “I’ve definitely had a few shows and music video opportunities that I’m bummed about being canceled. I try not to take this time too personally, though; I don’t like to think of myself as a victim,” said Yung Baby Tate. “All of our careers have taken a hit — the entire world feels this — so while things have shifted a bit for me, I think it’s a bit selfish to cry about the ways my career has been affected. What’s most difficult is thinking about the future of what the world will even look like after this. That part has affected me the most.”

Despite social isolation and the suspension of recording sessions for artists who don’t have in-home studios, female rappers have been effective with unexpected methods of creativity. From various livestreams — think Megan Thee Stallion and Crunchyroll — and unleashing comedic challenges, even in the face of quarantine, the online content of women in rap will continue to thrive.