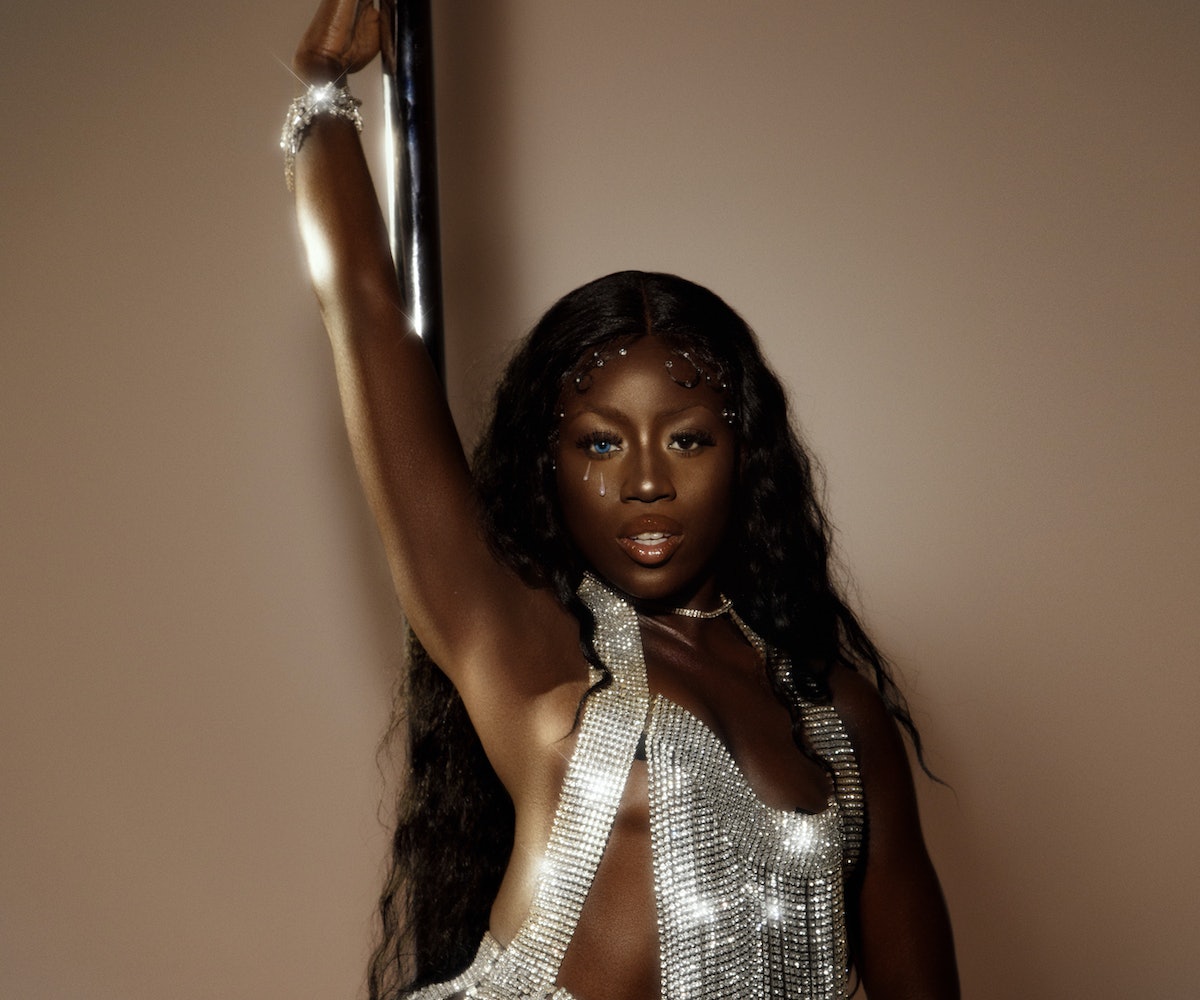 Bree Runway’s “Gucci” music video opens with the rapper standing in a many-sided dome that's revealed to be the glittering insides of a diamond. She’s decked out in a tight silver, expensive-looking mini dress, black feathered dinner gloves, and huge, bedazzled tear-drop earrings. It is a bold visual statement but one that the U.K. rapper’s rapidly expanding audience has come to expect since the release of her dynamic March 2020 video for “Apeshit,” which kicked off a hundred and one comparisons to the wacky, over-the-top stylings of Missy Elliot.

High-octane visuals have since become somewhat of a calling card for the young artist, which she pairs effectively with equally bold music, a sound she once described to NME as “destructive pop that is all genres and everything at once.” While “Gucci” flirts with a steely, club-like anthem, “Apeshit” is full ‘90s hip-hop, complete with flares of electric guitar and thumping percussion; what makes both memorable is Bree's potent delivery: confident and alight with attitude.

“I just feel like you've got to leave the viewer wanting more, and that's what those kinds of videos from the early 2000s made me want,” Bree, aka Brenda Mensah, says over the phone one morning from lockdown in London. “I want them to want more and to watch it again.”

When she wasn't listening to music, growing up in the inner London borough of Hackney, Mensah remembers her childhood experience as something akin to “one of those Hunger Game shows.” She says she was bullied during school, facing colorism as one of the darkest-skinned girls, but the experience helped her to develop thick skin as she found a defiant spirit within herself. “I just don’t care about what anyone thinks of me," she says. "Because the worst has already been said to me."

These days, Mensah's courting much kinder feedback from many of her peers. She’s already received cosign from Missy Elliott herself who sweetly tweeted at Mensah following "Apeshit"'s release to “keep shining mama.” Doja Cat instructed her followers to Google her. Most recently, Mensah hopped on Rina Sawayama’s “XS” remix to the giddy delight of her fans. And before that, she teamed up with fellow alt-pop artist Yung Baby Tate for “Damn Daniel,” the quarantine-shot video of which found Mensah dancing in front of groovy visuals in a leopard catsuit. If there is a wave of black women artists breaking molds of what pop music can sound like, Mensah is surely right on top, free-riding it straight to a destination far beyond the horizon.

In the condensed and edited conversation below, she explains the importance of having eye-catching visuals, her love for luxury fashion and why she hopes her boundary-breaking music will inspire more women to "to be a limitless human being."

Your music has really inspired a lot of young women, especially young black women. I was on YouTube and I saw a lot of comments saying that you're the black pop star that they've always dreamed of. How does it feel to hear that?

Do you know what, it makes me feel or it reiterates to me that I have a responsibility, and me being a musician is just more than anything you could, I don't know, it's just less about the vanity and more about the purpose, 100%. I feel like I was placed in this position to almost be like a gateway to women in the next generation. Even women of all ages, I think. We all struggle with that limitation that has been put on black women like growing up, there's still women repairing themselves from traumas in their past and things that have been said about them, or how they've been made to seem at work. There's so many different ways you can face limitations as a black girl.

I just want to be that girl that just shows you that fuck a limit, forget a limit. You can do it, you can do it. I cross genres. I wear any colored hair that I want. I don't move with limitation. And I just feel when I see these comments, it just inspires me to get crazier, get bigger, get blacker, get louder, get more excellent and more creative so that I can just inspire you to be a limitless human being.

Your music videos are always such huge statements. How important is brainstorming the visual side of your music to your creative process?

I think it's super important because music videos from the early 2000s, which I was like sat in front of glued to the TV when my mom goes to work and I'm left at home alone with my cousin, is one of the main big reasons why I was inspired to make music because of the visual side of it. And I just feel like you've got to leave the viewer wanting more, and that's what those kinds of videos from the early 2000s made me want. I would go back and watch it, or I would wait for them to repeat again on a different music show. I was obsessed. And I just want to leave that lingering feeling in a viewer's mouth or eyes or whatever. I want them to want more and to watch it again. So, yeah.

Which artist's music videos really impacted you when you watched them?

Lady Gaga. The first video I saw of hers was "Just Dance," and I just thought she was so cool. I don't mind when women sell sex and stuff like that, we all do it. But hers was just so artsy and so fashion. I was like, oh my God, I love this. This is special. And then it was music videos like "Marry the Night". Marry the Night was like a 13-minute music video. It was like a film because there's so many different scenes, monologues. And "Bad Romance", I was like, is she kidding me? Yeah, she's great.

Gaga definitely helped usher in the pop "persona." Do you feel Bree Runway is a persona of yours?

You always look incredible in your videos. Is fashion a hobby of yours?

Yes. I love what different moments in fashion represent in time. Like the baby pink Dior monogram, that reminds me of like Paris Hilton and when her and Kim [Kardashian] were besties. Or like the mirrored LV bags and stuff like that, that reminds me of like Kimora Lee Simmons in her prime at Baby Phat. It just reminds me of really interesting moments in time. I don't know, I just have such a passion for artistic luxury items. I literally sometimes scream when it comes through the post for me. I've ordered something, I know what it is. So I open the box and I'm like, Are you okay? What is wrong with you?

What's something that you recently ordered?

Something that I recently ordered, which I love, it's like this super long vintage Jean Paul Gaultier dress, and it has illustrations of churches and really monumental buildings through the dress. I think the only person I've seen wearing it is Madonna. Yeah. And I've got that, and I love it. It's so long for me because I'm so tiny, but I'm like, you're not going anywhere I'm keeping you. I'm keeping you. I love it.

Do you have any goals as an artist? With your debut album or anything that you want to achieve?

I definitely want to put together an amazing debut album with some really dreamy collaborations. Hopefully I can work my way up to a great place, and back some really sick collaborations for the album as well. I think that will be so sick. And I would love to cross over and spread more, spread my Runway wings more in America. It's such a shame because I was meant to spend more time there this year, but obviously a Corona queen doesn't want us to live our lives, you know?