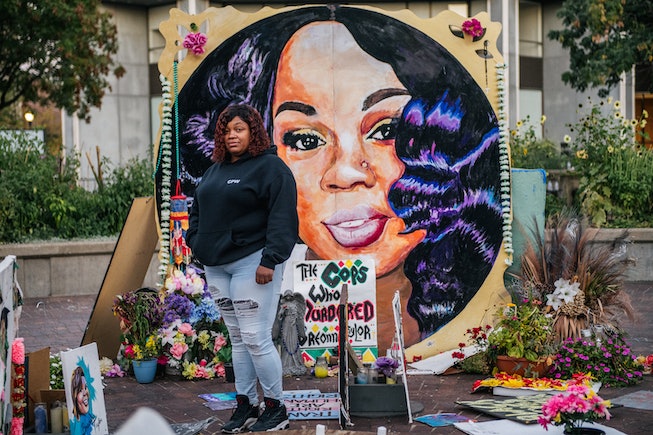 Breonna Taylor, a 26-year-old EMT and aspiring nurse, was shot to death by police in her Kentucky home, in a case that would pick up momentum to reach national levels of attention during a summer of resistance and protest. On March 13th, officers burst into Taylor's home and fired several rounds, senselessly killing her. Today on September 23rd, it was announced that only one of the officers involved in the shooting will be charged with a crime — and not even one directly related to Taylor's death, but rather for recklessly firing without a clear line of sight, potentially endangering the apartment complex's other residents.

Former Detective Brett Hankison was indicted by a grand jury for three charges of wanton endangerment, a class D penalty that carries a 1-5 year sentence, with a $15,000 bond. The other two officers involved in the shooting, Sgt. Jon Mattingly and Detective Myles Cosgrove, were not charged with any crimes. Hankinson was also the only officer fired from his job with the Louisville Police Department.

According to the NYT, Kentucky Attorney General Daniel Cameron said that the three officers fired a total of 32 shots, with rounds fired by Mattingly and Cosgrove hitting Taylor, while the ten rounds fired by Hankinson did not.

Taylor's family received $12 million from the city of Louisville in a wrongful death settlement. Protests have erupted in Louisville, with the New York Times reporting shock and disgust from people watching the announcement live. Taylor's name and image have become a rallying cry in the national conversation around racial injustice that reached a pitch this summer, becoming symbolic of the oppression Black women face in their daily lives. Celebrities and the media have also brought the case to attention, demanding justice for Taylor and her family.

Protests have already begun — Louisville mayor Greg Fischer declared a state of emergency yesterday in anticipation of the grand jury decision, and has instated a 9pm to 6:30am curfew, effective tonight. Members of the Kentucky National Guard will reportedly join other law enforcement in enforcing the curfew; police and protestors are already clashing. You can donate to the Louisville Community Bail Fund here.