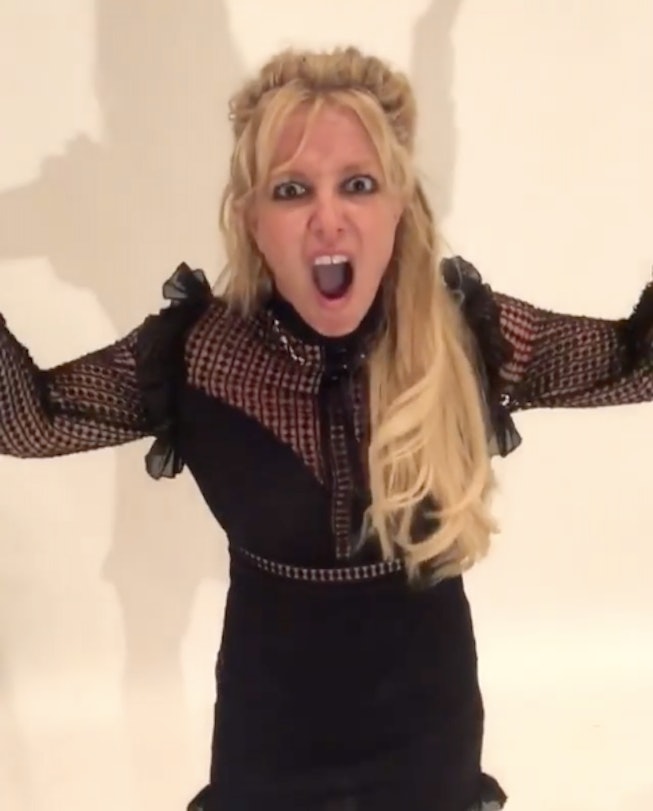 I've said it before and I'll say it again: Britney Spears' Instagram account is a national treasure. It's a beacon of chaotic yet deeply earnest positivity, and ultimately a true reflection of Spears, who despite being dog-piled by the press for years, is still a pure soul. Alongside her archive of dance videos, inspirational posts, and painting time-lapses, Spears dropped a heartfelt Pride message for the LBGTQ community.

It's not your run-of-the-mill declaration of support; in classic Spears video style, it was exuberant as hell and slightly manic, with Spears practically yelling about her love for her LGBTQ fans 23 days into Pride month. "To all my friends at the LGBTQ community, happy Pride Month," Spears said. "You guys bring so much heart, passion, and articulate everything you do. Because of you, I've had the best nights of my life. I love you so much it hurts."

Before she could wrap up the message, Spears' longtime boyfriend Sam Asghari also chimed in with his support from afar. "Go LGBTQ!" he yelled, interrupting Spears who yelled back, "Baby! Be quiet!" She then threw up hands up and made a "Can you believe this guy?" face at the camera. Spears never misses!

The video was well-received; "My new daily prayer," wrote Olympic figure skater Adam Rippon. "WE LOVE YOU!!" Asghari also hopped back on with a written confirmation of his support. "Gooo 🏳️‍🌈 😂 best community."