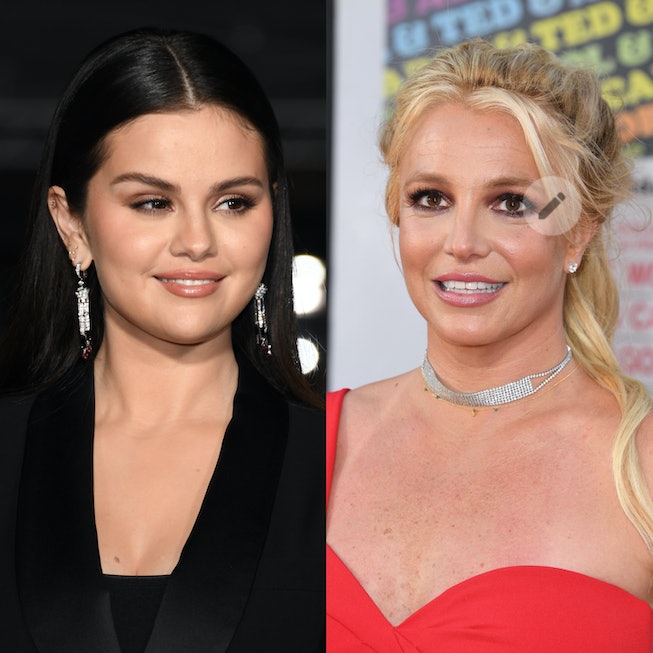 Britney Spears has been discussing her past experiences in the spotlight on her Instagram, and a recent post appeared to call out her friend, Selena Gomez, for a 2016 American Music Awards speech in which she encouraged women to show less skin on Instagram.

“Don’t you just love the nerve of women who stand firmly getting awards and speak on their beliefs about not showing their bodies on instagram ???!!!!!” Spears wrote on Tuesday in a since-deleted caption of herself wearing a red bikini. “They say ‘This is NOT something I would do’ yet those women are the very ones who get 4 million dollar budget videos made about sucking and licking on homemade ice cream!!!!”

Fans and websites quickly speculated that Spears was calling out Gomez. During her AMA speech, Gomez said, “I don't want to see your bodies on Instagram, I want to see what's in here.” In 2020, Gomez released the “Ice Cream” video with Blackpink that Spears also seemed to be referencing.

Gomez and Spears’ fans quickly flooded the comments of the post, questioning why Spears would choose to call out the Rare singer — especially when Gomez recently attended Spears’ June wedding to Sam Asghari.

On Wednesday, Spears clarified in a long caption that she has no ill will toward Gomez.

“Let me clarify about me sharing my beliefs on women judging other women for their own rights in expressing themselves,” Spears captioned a post of a drawing of a woman’s silhouette that read, “A strong woman stands up for herself. A stronger woman stands up for everybody else.”

She continued, “What I said had nothing to do with anyone specific at all … it was clearly a subject in hand all women have had to deal with … look I go way back with music !!! I honestly referencing my days when I was younger when I got discriminated against harshly … men in interviews discussing my boobs on live TV or showing my midriff and skin !!! If anybody knows what judgment feels like I’m sure Selena has gone through something pretty similar.”

She followed up by saying the “ice cream” comment was in reference to Kelis’ 2004 video for her hit song, “Milkshake.”

“What I was replying to was honestly Kelis the MILKSHAKE video when women were finally shaking their asses … that was a moment in history where people woke up to the fact… pushing the boundaries of expressing oneself became explicit… tons of people were offended!!!” Spears wrote.

“I empower women to express their bodies however they choose… and TONS of other stars who had million-dollar budget videos who were known talked s–t about her when she was a new artist trying to make it !!! I apologize for my ignorance, but I didn’t even see the video for Ice Cream that Selena Gomez, who I genuinely look up to and have so much respect for had made.”

She mentioned Gomez attending her wedding and how thrilled she was to have her there.

“As for the beautiful queen Gomez, I got to be surprised by her on my wedding day and was completely in awe of her !!!” she wrote. “I mean I played the DJ for 5 minutes like an idiot and played my favorite song of hers, ‘Bad Liar’ LOUD on the dance floor like a 6-year-old fan and got to sing my favorite song with her and I wanted to freaking pinch myself!!!

I would like to tell Selena which she’s probably not even aware of trash news that her music has gotten me through lots and thank you again for making my dreams come true by coming to my wedding … you’re one person I have always wanted to meet and my dream came true and I will never forget it !!!”