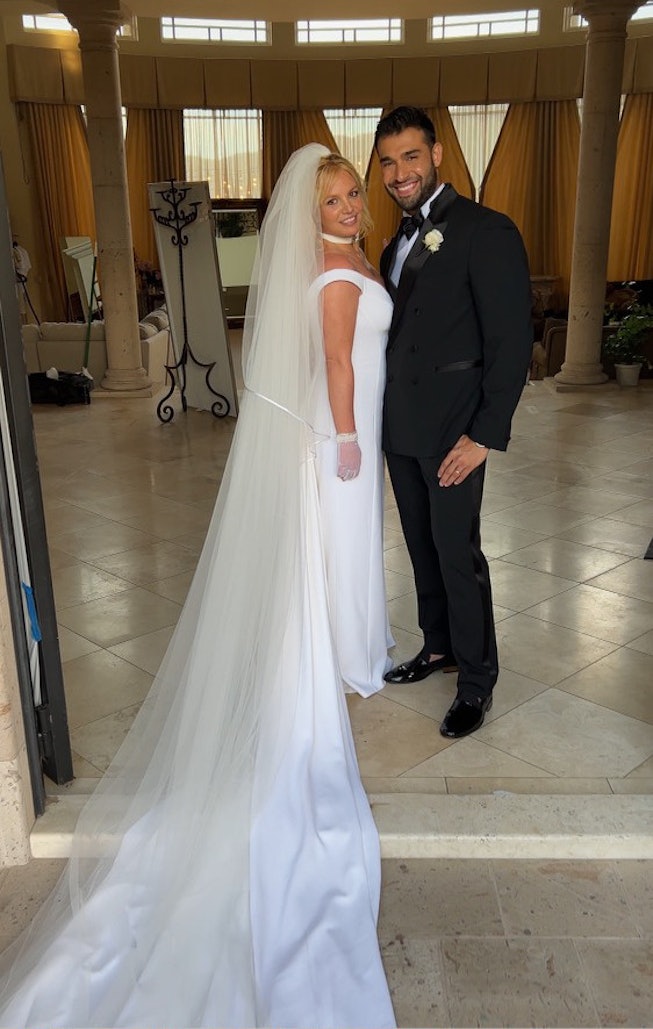 Congratulations to Britney Spears and Sam Asghari! The couple officially tied the knot on Thursday, June 9, with an intimate ceremony and reception at their Thousands Oaks home in Los Angeles. As with any celebrity wedding, there were plenty of outfit changes, and Spears went big with her looks, courtesy of Versace.

For her special day, Spears wore a white silk cady gown by Atelier Versace, which featured a portrait (or a plunging, slightly-on-the-shoulder) neckline, pearl buttons down the back, a front leg-slit, and a 10-foot train. Overall, the dress took the Italian fashion house more than 700 hours to make by hand, reports People, and was paired with a 15-foot silk tulle veil with silk satin trim, white satin pumps, a matching choker (Britney loves a choker necklace!), and short, sheer, fingerless gloves.

The couple turned to jewelry designer Stephanie Gottlieb to custom-make their wedding bands. Spears opted for two platinum bands — the Classic Round Diamond Eternity Band and Marquise Diamond Band — with diamonds that totaled just under 2 carats each. Ashgari, who wore a bespoke tuxedo from Versace, chose two bands from Gottlieb, too, including the Step Edge Comfort Fit 5mm Band and Beveled Comfort Fit 5mm Band.

“Designing Britney and Sam’s wedding outfits came naturally to me,” Donatella Versace shared in an official statement to People. “A tremendous amount of love was poured into every detail. Together with our Atelier, we created a gown and tuxedo that exudes elegance and glamour. They look just perfect together!”

We knew since November 2011 that Versace was designing Spears’ wedding gown, which the pop star revealed in a now-deleted Instagram post. “Donatella Versace is making my dress as we speak…. Have a good night folks!!!!,” she wrote in the caption. The friendship between the two go way back, spanning two decades, as Spears first met the designer after sitting front row at a Versace show in October 2002. She also wore a sparkly mini dress from Versace to the 2008 MTV VMAs.

“Since we first met, Britney has always had a very special place in my heart,” added Donatella, according to People. “Seeing her free, happy, and now getting married puts a smile on my face.”

For the wedding reception, which included famous friends like Madonna, Selena Gomez, Drew Barrymore, Paris Hilton, and more, the performer was seen wearing three additional outfits from Versace, according to Vogue. Between greeting guests and, of course, hitting the dance floor, Spears wore a black mini dress, a two-toned look, and another mini dress in red with fringe on the shoulders.

See more of Britney Spears wearing Versace at her wedding in the photos, below.

NEXT UP
Fashion
Getting Ready With Richie Shazam For Her Directorial Debut
Fashion
DL Eyewear’s New Sunglasses Are For The Schitt’s Creek Fans
Fashion
Jisoo Of Blackpink’s Best Fashion Moments On The Red Carpet
Fashion
How To Style The Mini Skirt In 2022, According To Celebrities