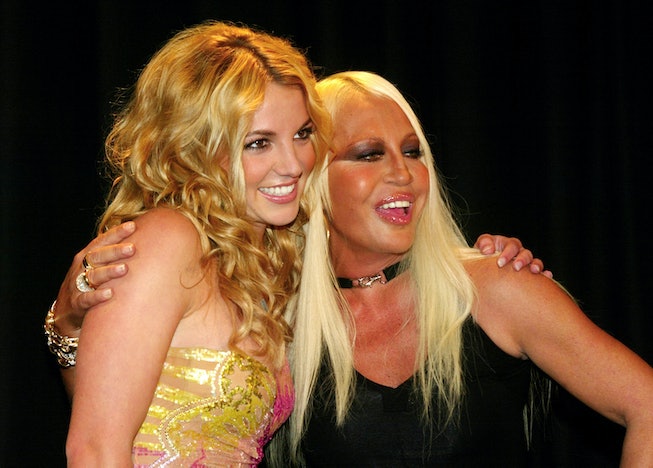 Following the near-end of Britney Spears’ 13-year long conservatorship under her father Jamie, the pop star legend seems to be gearing up for the wedding (and dress) of her dreams.

Back in September, the singer announced her engagement to actor and fitness trainer Sam Ashghari, who she has been in a relationship with since 2016 after meeting on the set of her music video for “Slumber Party.” In an Instagram post, Spears showed off her diamond ring, which was designed by New York-based jeweler Roman Malayev, and wrote, “I can’t fucking believe it 💍💍💍💍💍💍❣️!!!!!!”

Most recently on Wednesday, Nov. 10, Spears uploaded a series of photos modeling an off-the-shoulder peach-colored tulle gown. While fans believed the silhouette to be for her upcoming nuptials, the soon-to-be bride revealed that her wedding dress was actually set to be designed by none other than long-time friend and designer Donatella Versace. “No… this is not my wedding dress bahahah!!!! Donatella Versace is making my dress as we speak…. Have a good night folks!!!!,” the pop star wrote in the caption.

This may come as no surprise for avid Britney fans, as the duo’s relationship goes way back to nearly two decades. Throughout Spears’ career, she’s worn plenty of Versace’s most coveted and dazzling looks both on and off-screen, like her infamous sparkly mini dress from the 2008 MTV VMAs.

The designer has also been an active supporter of #freebritney. In May, Donatella uploaded a throwback photo of the two on Instagram, writing, “This flashback is when she came to my show in 2002, looking glamorous in Versace. I’ll never forget when you came and stayed with me Britney, you were and always will be magical!!!!”

Back in June, Britney Spears appeared in the Los Angeles courtroom, where she spoke in detail about the terms of her conservatorship that she’s been living under since 2008. After 13 years of enduring abusive and overly-strict living conditions, her father Jamie agreed to step aside, allowing the singer to finally make decisions for herself again. Her engagement to Asghari seems to be a step towards that, as Asghari's manager Brandon Cohen said to People, “The couple made their long-standing relationship official today and are deeply touched by the support, dedication, and love expressed to them.”

With an upcoming court hearing to officially end her conservatorship on Friday, Nov. 12, Britney will likely have her fairy-tale ending after all.