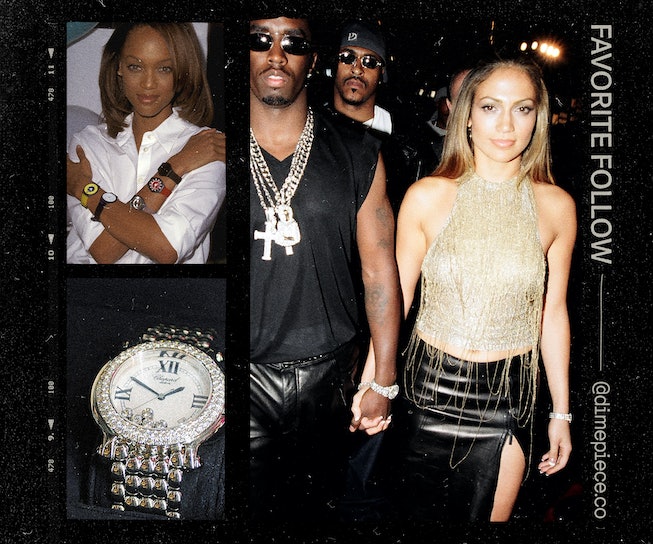 Brynn Wallner became obsessed with watches completely by accident. Wallner, a strategist, writer, and a downtown New York girl in the know, was working at Sotheby’s editorial team in 2019 when she was tasked with working alongside the company’s watches department. They needed someone to make watches appeal to a younger audience, and Wallner had just the keen internet experience to do it right. She produced and edited pieces about the greatest watches of all time, and soon enough, she found herself hooked.

“Once you scratch the surface, there's so much and it was all great,” she explained over the phone to NYLON from her East Village apartment. “And the only thing that irked me was that women were kind of, they were just so excluded from the narrative and you would Google women and watches and find fucking Ellen DeGeneres.”

The DeGeneres problem aside, there were a few other glaring issues that caught Wallner’s attention. First of all, the way watches were advertised to women was straight up corny, with marketing nowhere near as sexy or smart as any handbag campaign. Smartphones had also made watches feel like an almost moot accessory. Then, there was the whole issue surrounding how the watch world had a high barrier to entry. What if a woman wanted to buy a men’s watch? How would she go about sizing? What Wallner wanted was something to make watches cool again to young women and give them the resources to be informed shoppers. Enter Dimepiece.

At first glance, Dimepiece’s appeal is obvious: a visual record of culture’s many hot girls — the dimepieces, if you will — with their varied, glamorous timepieces. It Girls, paramours, and even a fallen health-tech CEO on trial for fraud can all be found on Dimepiece’s feed alongside a mini history lesson on the watch in the spotlight. But don’t get it twisted, Dimepiece is not just another 90s nostalgia Tumblr offshoot; Wallner has a backend in the works with lofty goals of making it a destination for watch education, editorial pieces, e-commerce, and more.

Until Wallner’s timepiece empire is up and running, she'll stay reminding us that the ultimate accessory is a crisp and striking watch, one iconic hottie at a time. If you're checking the time on your phone, that's on you.

Which celebrity has the best watch collection?

Honestly, good question. It's hard because I feel like you see most of the contemporary and the older celebrities wearing one-off watches, but you don't see a full collection. And if you were to Google famous women watch collectors, again, you would get an Ellen DeGeneres, but I feel like the Olsen twins have a compelling watch collection. There's this amazing photo of Mary-Kate holding a can of whipped cream to her face at a party, and she’s wearing a huge Rolex Daytona, which is one of the most expensive Rolexes. It's a bigger model, and it's amazing. They also have an Audemars Piguet Royal Oak, which is one of the most expensive watches. They go up to $800,000 for the most expensive piece and start at around $12,000 going second-hand. The Olsen twins clearly know their shit. Their watches are not only as cool accessories, but also as investment pieces. And can we expect anything less from our dear Olsen twins?

If Bella Hadid was a watch, what would she be?

Bella Hadid owns a Panthère de Cartier and I have coined it in my mind as the It Girl watch. It's cute, it's a gold band. I feel like Sofia Coppola wears it, and she's an older It Girl. I think Sofia Richie wears it, Zendaya has been spotted wearing it. I feel like all of the Hollywood elite girls love a Panthère. And it's nice because it's dainty and feminine, but I also think that the way the bracelet is designed it also kind of looks a little flossy without being too overstated. I just think it looks great on any It Girl's wrists.

Oh my God. Okay. Marry Cartier. It’s just timeless and elegant and there are so many different kinds of variations of it where you can really make it your own, so I feel like in that sense they're very adaptable, versatile, reliable, just classy and have such a good history.

I guess I would f*ck Patek. Before I got into watches, Rolex was the only brand to me. I was like, "Yeah, Rolex. Nice watch. Cool." Once I got into watches, I was like, "Oh, there's this whole other world, and these are so coveted." They could be a little douchey, but they also have a cool history. I feel like they also read very masculine to me. And I know a few women with Pateks, and it looks really cool on them, but the Patek Aquanaut is very, very masculine. I couldn't see one woman wearing that. And if I want to f*ck...let’s hype up the masculinity, let me get the himbo.

It might have to be Mary-Kate with the whipped cream. That one is fucking crazy. There’s another one that’s kind of a cutty one, but you know in Sex and the City, Amalita Amalfi, the international party girl? She's like, "Carrie, you are crazy!" She's like, "You have to come out!" I love her, and she's wearing a gold Rolex Lady-Datejust, which she definitely got from one of her sugar daddies because the Sex and the City. I think there's one episode where Charlotte is wearing a Cartier Tank Française, and I have yet to get a screenshot of it. And then when I was watching this episode, I was like, "Yeah, of course she has a Rolex."

Where should someone look for watches if they’re on a modest budget?

If you want to get a nice watch that is a brand, like a Cartier, there are a lot of good secondhand pieces available on the internet, on eBay, on The RealReal. And it's going to set you back $3,000 and upwards, but in the grand scheme of watches, that is pretty cheap. But then also if you're looking to go lower, there are so many good vintage Seiko watches. I miss when American Apparel had brick and mortar stores because American Apparel had an amazing curated selection of vintage watches. I would start with Seikos. I think vintage Timex is cool. Then there's also this new brand called BREDA. They're new watches, and they're affordable. If you just want to wear a watch, they have really nicely-designed ones, and they style it so cute.

Do you have your own Dimepiece story?

I feel like if you're not just born getting luxury stuff all the time, to buy a luxury item has to be so full of intention, because you're like, "I'm about to spend so much money." I turned 30 this past summer, and my dad was like, "What do you want?" And I was like, "I want a watch." And he's like, "What kind?" And I was like, "I don't know, because I have to do my research, it has to be so personal to me, I have to know." But his offer expired and I never wound up getting one. I was like, "Fuck!" But now I know I want a Cartier Tank Française.