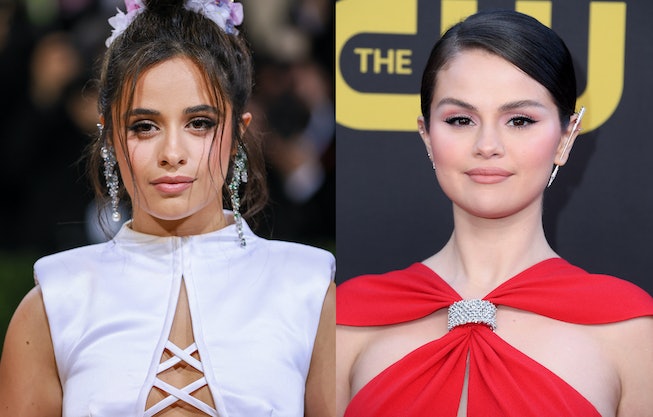 Selena Gomez spoke with Camila Cabello about her experience battling anxiety, for her new mental-fitness program Wondermind. During their conversation, the “Havana” singer opened up about coming to terms with her anxiety, working with a therapist, and the stigma surrounding mental health.

“There’s obviously such shame that comes with mental health,” Cabello said. “From the outside, my life looks great. I can make an album, or I’m in this relationship, whatever. I almost shamed myself by thinking people wouldn’t understand that I have anxiety, because why?”

“The stigma around saying that you need help is something that frustrates me,” she continued. “Because sometimes people can be like ‘No, I don’t need that, I just need free time,’ or whatever. Obviously, that’s valid, but just because you’re in therapy doesn’t mean something is more wrong with you than other people.”

“We all have things that we could work on, we all have tools that we could learn, and it doesn’t mean that you’re ‘crazy’ or ill,” she continued. “What if you’re just trying to work through the stuff that makes you suffer? Don’t we all want that?”

Cabello then revealed that she’s taken SSRI medication to alleviate her anxiety symptoms. “I felt like I needed that to get to a place where I could go below the surface level loops and manifestations of it and get the thought patterns and things that were really causing me anxiety,” she said. “I definitely feel like medication can be really helpful and necessary.”

Along with seeking professional help, Cabello explained that simply being honest about her mental state has helped. “I think the best mental health advice that I’ve ever received is that faking or pretending is the worst thing for my mental health, personally,” she said.

While working on her latest album Familia, the singer prioritized crafting a safe work environment to combat her anxiety. “At the beginning of that album, I was at the worst of my mental health journey — well, probably the worst,” she said. “So my condition for going into the studio was going in with people who I felt emotionally safe with. So that if I was like ‘Hey, I have these obsessive-compulsive behaviors when I have really bad anxiety,’ or ‘I’m having anxiety right now,’ they were people who made me feel safe to say things like that.”

Wondermind’s mission is to “destigmatize and democratize mental health,” through daily tools, mindfulness activities, and candid conversations. Head to their website to learn more about Cabello’s mental health journey.

NEXT UP
Entertainment
Emma Chamberlain Is Officially Moving to Spotify On February 23 (Exclusive)
Entertainment
Chloe's "Pray It Away" & 9 Other New Songs Out This Week
Entertainment
19 Niche Music Festivals For Every Type Of Person
Entertainment
Harry Styles Is Performing At The 2023 Grammys
Style + Culture, delivered straight to your inbox.