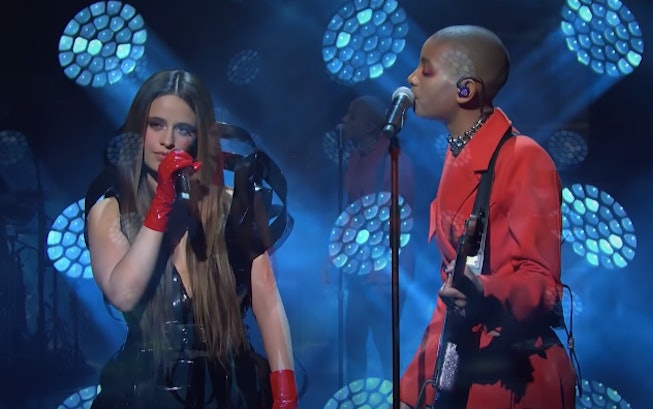 Camila Cabello returned to SNL as the sketch show’s musical guest and brought friend and collaborator, Willow Smith, along for the ride. Together, the duo performed their song “Psychofreak” live for the first time.

Both women appeared on stage in matching outfits. NYLON cover star Smith paired a red blazer set with black thigh-high boots. Meanwhile, Cabello donned a more avant-garde look and wore a black latex dress with long red gloves. The artists opted for a simple set and performed on a plain black stage backlit by ominous blue lighting, which focused the attention on their rebellious anthem.

The pop-punk track comes from Cabello’s fifth studio album, Familia, which was released on Friday. The melancholy song describes her struggle with feeling like an outsider, and opens with Cabello singing, “feeling like a psychofreak sometimes / tryna get connected / no wifi.” Later she elaborates on feeling disconnected in a romantic relationship. “When we’re makin’ love, I wanna be there / And I wanna feel you pullin’ my hair / And believe the words you say in my ear / Gotta go outside, I need some air,” she sings. Then Smith chimes in and belts, “I want to, want to, want to touch you / Want to touch you, but my fingertips are numb.”

Though “Psychofreak” largely talks about romance, the song also covers other aspects of Cabello’s life. At one point she references her former Fifth Harmony bandmates, and sings, “I don’t blame the girls for how it went down.” During a press interview, Cabello explained that “Psychofreak” is about her life and career thus far. “That song is basically about anxiety and all of the different things that have made up, like, my journey with anxiety and starting off really young in the industry,” she said.

Smith — who released her first album, Lately I Feel Everything, last year — brought her vocals and guitar skills to the SNL performance. The artist, and daughter of Jada Pinkett and Will Smith, has been a driving force in the revival of pop-punk music. In an interview for her cover shoot with NYLON, the singer explained the genre's growing popularity. “I think that there are a lot of things happening socially and politically, and I think that people just want to scream and growl and express themselves because this time in life and in America and on Earth is not easy,” she said.

Following their SNL debut, both artists gushed about their experience performing together. Cabello shared a clip of them singing on Instagram. Smith returned the love with a series of polaroid photos, captioned, “Wish I could be like everyone, but I’m not like anyone. Big gratitude to my bbyboo @camila_cabello for having me on this beautiful song. ❤️LOVE YOU❤️”

Watch their performance, below:

NEXT UP
Culture
6 Shows To Binge Once You've Finished 'The White Lotus'
Entertainment
Raye Explicitly Speaks Her Mind On Debut Album, ‘My 21st Century Blues’
Entertainment
Annie DiRusso Makes Indie Rock For Your Growing Pains
Entertainment
Harry Styles Is Performing At The 2023 Grammys
Style + Culture, delivered straight to your inbox.