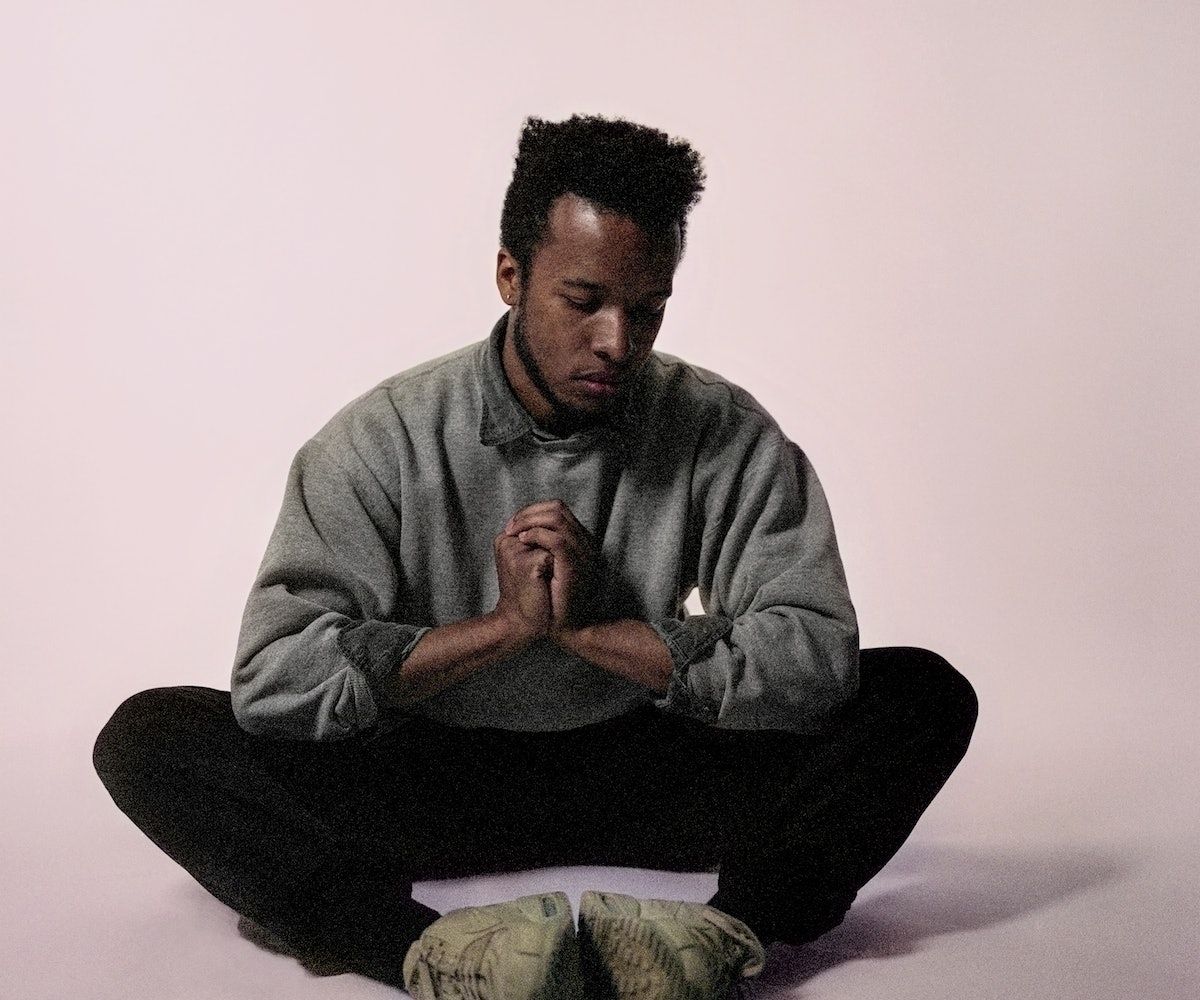 Social distancing doesn't have to mean that you can't still make things with your friends. Brooklyn song-maker Cautious Clay proved that on Wednesday with the release of his sunny new song "Cheesin'," made all the more special by the full slate of musicians (and close pals) he tapped for the project.

Co-produced by Clay and Californian producer HXNS, with Nashville's Melanie Faye on guitar, the breezy uplifting track features vocals from Remi Wolf, Still Woozy, Sophie Meiers, and Claud. With everyone remote, and the creative process reduced to sending files back and forth over the internet, "Cheesin'" is a testament to the resilience of creativity, possible even when all parties are hundreds of miles apart. All proceeds from the track will go toward the MusiCare's coronavirus relief fund, which has been supporting artists affected by the ongoing pandemic.

"I wanted ["Cheesin'"] to be a thing that I could use to bring everyone together while things were a little bit crazy," Clay said of the track over a recent phone call. "Might as well do something that was positive for people and have a great time... I'm just trying to empower people to be creative and then also just support those who really need it in the time who don't have other ways to do that."

Calling from the tranquil surroundings of his partners' parents' home in Massachusetts — to which Clay lugged along enough equipment to erect a makeshift studio space — the singer-songwriter explained how the big project came together, how he's taking advantage of his abundant alone time, and the importance of the live music industry.

How did the idea for this big collaboration come together?

I sort of spearheaded everything. I wanted it to be a thing that I could use to bring everyone together while things were a little bit crazy, might as well do something that was positive for people and have a great time. Especially for artists, people who work in the music field or in the creative field in general, a lot of people in the live side of music are kind of struggling now. I'm just trying to empower people to be creative and then also just support those who really need in the time who don't have other ways to do that. So it was cool because a lot of people on this song felt the same way and wanted to support, so it was awesome to be able to have that.

How different was the creative process for this from your usual process?

I usually work pretty remotely myself, so because I had a lot of different people working on this, it felt kind of... a bit more just passing things back and forth. Like, 'Yo, you're gonna work on this? Yeah. Here's a song, here's an idea.' They send it back and so on or so forth. I think because of that mentality, it sort of sparks things up in a really interesting way. I think the main difference is that you have to rely on people to get things done, something that I feel like can be difficult, but in this scenario wasn't that difficult because everyone was sort of in on the same positive [mindset] of wanting to be a part of this. So, it was actually pretty chill. I would send HXNS the files, my friend HXNS produced the song initially. He sent it to me and i basically recorded everyone's vocals into the song remotely. So they would send me their stems and I would put it into the file. And that was how the song got done.

Some songs made during this time have leaned a bit toward sad, while "Cheesin'" message is pretty optimistic. What was the decision behind that?

It's definitely more optimistic I think. I think optimism is...I think it's what really keeps us alive. Which is pretty corny to say but what I'm trying to say is if you're not at least trying to do something, it's just gonna fizzle away. I think if you look at it in the sentiment of the song we're making, well, yeah, this is the scenario we're in right now: everyone having to stay home and thousands of people dying a day because of this disease. But I think if you can at least sort of smile or look at this scenario like "Hey, this is bringing us together in some way." I think you can take a sad song, you can take a happy song, both of them can have a similar effect as long as there's sort of like awareness to what's going on and the sentiment of it.

How are you feeling right now with everything going on?

It's weird, I feel like I genuinely have more of a routine now because what I can do is limited here, obviously. Like I can't go out, I can't go to such and such friend house, go to any movie, but I'm in a scenario now where I live in this house, it's very isolated so I can go on walks, and go to nature and all of this which is great. I'm not a religious person but I feel like it is like a blessing to be in this scenario. I definitely feel a little stir crazy because I haven't seen any other people, which honestly isn't that bad if you think about the fact that other people also are just completely alone. I think I haven't done as many zoom calls as probably most people, which I enjoy not doing.

Many musicians have been expressing concern about the future of the live music industry; what are your thoughts on it?

I genuinely feel like it will bounce back. I think [this pandemic] definitely will affect initially how people kind of go out, I think that young people are a lot more like realist in that way, and people are going to do music regardless. I don't think there's a scenario where people won't do shows because of this. However, I do think that there are certainly different things that will be affected because of it. I think there will be a lot more remote meetings, things like that. I think it's similar to the argument people make like "Oh we're eventually just going to have computer chips in our brains and never go outside." Which, I don't believe will ever happen because I don't think humans are wired that way, I think we are wired to grow and change. But to be in a completely isolated state is hard to predict. I think people for sure are going to be more preemptive, I'm hoping. Like our government will be more preemptive in how they'll address this kind of issue because yeah, we are definitely going to face something like this again, I'm sure. But I genuinely think that live music is something really important to a lot of people.